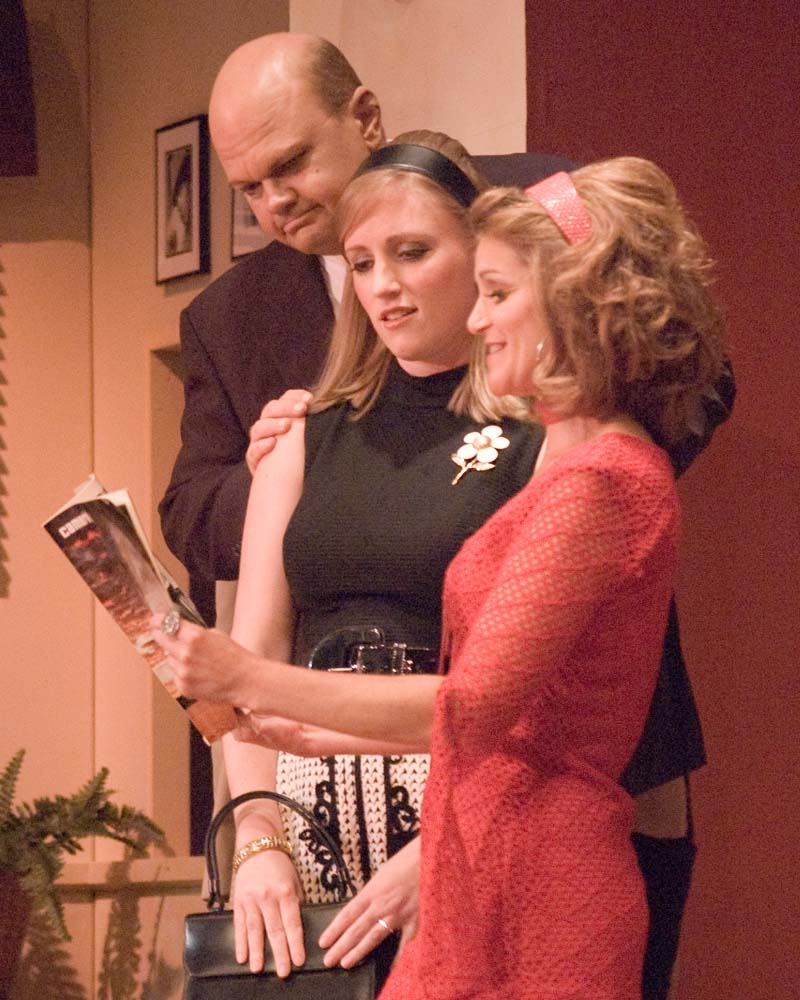 One of Hollywoods most famous misquotations didnt miss its mark this week at The Little Theatre of Alexandria.

Play It Again, Sam a line never actually spoken during Casablanca and the title of Woody Allens 1972 play had the audience rocking with laughter as socially awkward Allan Felix (Dave Wright) took his first tentative steps back into the world of dating after a divorce.

With the help of his best friend Dick (C. Evans Kirk) and Dicks wife Linda (Maureen Rohn), Allan never has trouble getting dates, but none of them ever stick around for long. In desperate attempts to impress and entice the bombshells in which he was interested, Allan executes a succession of events that go awry. He knocks a table over in his ill-fated attempt to be suave and feigns drinking bourbon he doesnt drink to impress another date in this abstract comedy.

One of the most fascinating features of the play is its look into Allans imagination. A film critic, he constantly envisions advice from his hero, Humphrey Bogart (John G. McCracken) and fights off insults from the specter of his ex-wife Nancy (Nicole Nelson).

Nancy, of course, must portray not a real person but Allans memory of her. Her exaggerated wickedness matches the voices of doubt everyone hears in their own minds.

Allans romantic prospects look dim until he realizes that he may be developing feelings for Linda. And with Dick neglecting her for business worries, she just might be starting to look twice at Allan.

The greatest challenge actors face in this play is overcoming the amusing stereotypes to make the characters feel like real people and this cast meets the challenge with style. While Dicks obsession with constantly informing his secretary of his exact location is ludicrous, his affection for both Linda and Allan is sincere.

Allans character could have been pathetic and obnoxious a mere nerd who tries too hard. Instead, though the audience may wince during his abortive dates, it is easy to understand his nerves, and the caring side he reveals with Dick and Linda makes him truly endearing.

His romance with Linda builds slowly throughout the play without either one realizing what is growing between them.

Their kiss is a touching apex. Allan raises his head to look out at the audience and quotes Casablanca (albeit out of context). Aiming his attention at the audience, he says, Play it again, Sam.

The plays final encouragement to be yourself is a bit trite, but the oft-repeated slogan comes to life when Allan realizes that the only woman who admires him is the one woman he was not trying to impress. Rather than a series of amusing failures reminiscent of Charlie Brown failing again and again to kick a football, the audience gets to watch a man regain his confidence.

More importantly, in a world that tells us to cut and run when relationships get hard, Play It Again, Sam says that broken things can be fixed and that sometimes what you want the most turns out to be something you already have.

Play It Again, Sam is playing through June 26 at The Little Theater of Alexandria, 600 Wolfe St. For more information, call 703-683-0496 or visit www.thelittletheater.com.