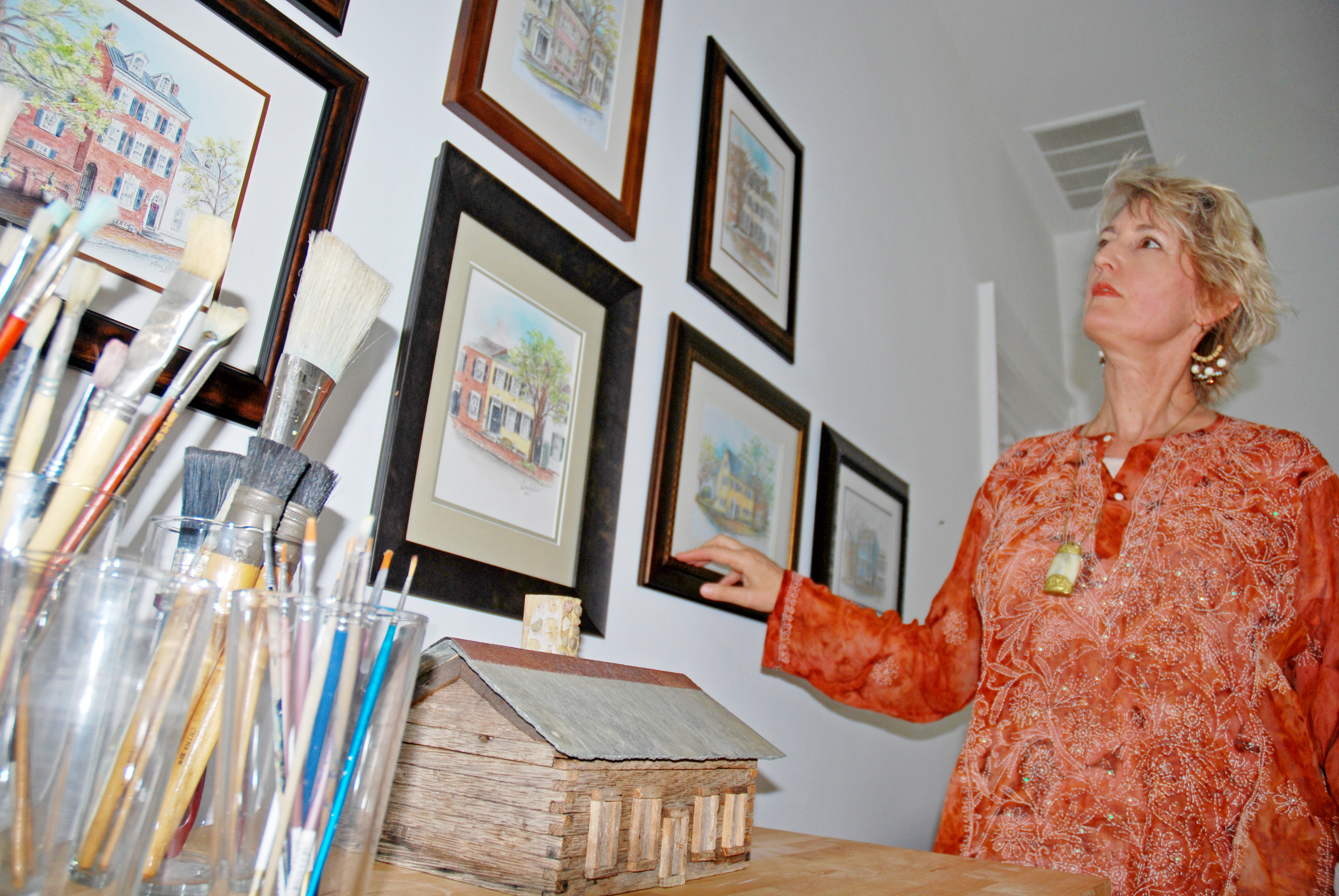 Artist Leisa Collins was travelling with her husband across the country from the West Coast, searching for a new place to live, when they took a wrong turn and ended up at the foot of Duke Street and Old Towns waterfront.

That was just three months ago. It didnt take long for them to realize they wanted to stay or that they would fit in. She has become so fascinated with the neighborhoods historic buildings, residents and overall aura that the New Zealand-American is hosting an art show at her combination studio and home on North Alfred Street.

It seems like most people that come to Old Town never leave, says Collins in her third-story studio, where quaint paintings depicting the many historic faades of the neighborhood.

Her first show, The Faces and Homes of Historic Old Town, is a tribute to the city for which she has grown an extreme affinity. Collins has penned and painted 16 pieces for the show depicting the citys Colonial past.

By combining pen-work and watercolor, Collins creates an abstract of her mission to combine the past and the present.

The pen work really captures the detail, and the watercolor wash brings it to life, she says. Its almost like if you take it back a century or two, with a pen, but I bring it up to the 21st century with the watercolor.

Collins began painting historic homes in New Zealand. Of course, any building more than 100 years old is considered extremely historic there. America is young, but not as young as New Zealand.
But this project takes on new meaning for her.

I was looking at different paintings and drawings and they were nearly all the established, famous buildings, Collins says. Since they had already been captured, I thought, What about the homes? And what about the people that made those homes so special?

So Collins endeavored to draw and paint the homes how she saw them as an outsider and go another step by interviewing their inhabitants.

Take a Wolfe Street gambling house-turned-funeral parlor-turned-home that she seems to have painted with great deftness. The home still has a trap door in the living room and a former morgue in its basement. But its owner is a senior executive at a trade organization, former broadcast journalist and member of the Clinton administration.

In most cases, the homes that I had been so fascinated by were outdone by their owners, she said.
Collins says she wants people who live in Old Town to appreciate the surroundings that made her stay when she and her husband took that wrong turn toward the Potomac River.

I want people to have a fresh view of Old Town from someone new, and to really appreciate what is here, she said.

She jokingly calls the neigborhoods pleasing aesthetics a result of peer pressure not to be confused with keeping up with the Joneses. Inspired, she wants to return the favor to others.

I want people to appreciate what their neighbors do to maintain the areas appeal, Collins says. Because your neighbor does, and because others do, you are compelled to do something to keep Old Town historic and beautiful.

Its a very art-inspiring area.

The Faces and Homes of Historic Old Town exhibit is from 1 to 5 p.m. on Saturday at 105 N. Alfred St., 3rd floor. For more information email [email protected] or visit www.leisacollins.com.