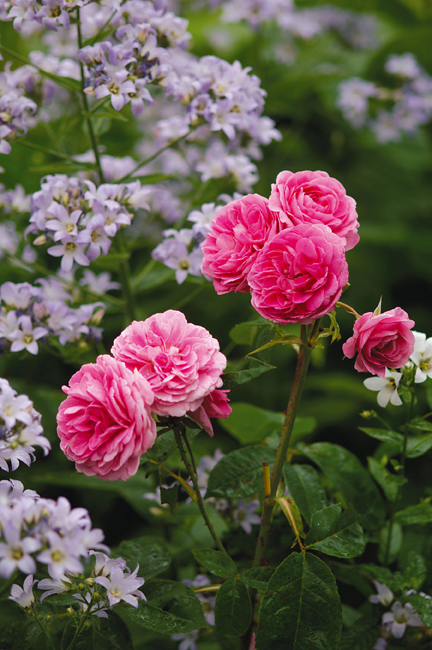 Every garden should be a rosegarden.

Roses have a reputation asfinicky plants that need more attention than a 2-year-old, but when you plantthe right roses, they flourish in your garden, and the care you give them isrepaid generously — with more flowers than you can count, and plenty of old-fashionedgarden romance.

“I don’t think much canmatch a rose,” says Stephanie Cohen, a garden designer and author knownfor her unreserved opinions about plants. Cohen, author of “The NonstopGarden” (Timber Press, $20), gave up growing needy, disease-prone rosesyears ago, but made room for roses in her garden again when she discoveredlow-maintenance Knock Out and other vigorous, hardy, disease-resistant shrubroses. “There’s a certain ambiance to roses, and a good rose in a mixedborder is an asset,” she says.

One hardworking rose bush isa good start, but you needn’t limit yourself — it might be just the beginning.Michael Marriott, a garden designer with David Austin Roses (www.davidaustinroses.com),recommends making room for bold groups of roses that will stand out in a flowerbed among annual and perennial flowers. When he designs gardens, he mightchoose one spectacular rose for a small flowerbed, or a cluster of 10 roses ina very large mixed border. Then he mixes things up.

“My golden rule is toplant something wildish with roses,” he says. Verbascum, foxgloves andother tall, spiky plants are classic companions for roses, and even though theymay be very carefully placed in the design, they often look as though they hadfound their own spots in the garden naturally. Marriott also likes to combineroses and eryngium (sometimes called “sea holly”), which has strikinground flowers surrounded with bristling collars. “You want contrast,”he says.          DavidAustin Roses, also known as English roses, caused a sensation when they wereintroduced in the U.S. about 20 years ago.

English roses — many withevocative names from the works of Shakespeare and Chaucer — were hybridizedfor their voluptuous flowers, and they also appealed to gardeners who weredisappointed by the lack of fragrance in other modern hybrids. Gardeners werealso frustrated by older varieties (though beautiful and sometimes fragrant)that succumbed to every passing bug and blight. The time was right for a roserevolution.

“David Austin did therose public a service, focusing on the essential bedrock character of therose,” says Steve Hutton, president of Conard-Pyle (www.conard-pyle.com),which introduced the prolific, non-stop blooming Knock Out rose about 10 yearsago. The cherry-red Knock Out was soon followed by a double-flowering variety,and other colors and styles — all with the words “Knock Out” intheir name. Then Flower Carpet groundcover roses and French Meidiland shrubroses swept onto the scene. These tough shrub roses did not lose their leavesin midsummer to mysterious diseases, and they were easy to grow alongsidecottage-garden flowers of all kinds.          “That’swhen I got back into roses,” Cohen says. “They work really well, theydo not get blackspot, and they are tough as nails. You could practically runyour lawnmower over them.”

In an all-rose garden, plantdiseases or an infestation of bugs can swiftly cause serious damage, but agarden that includes other plants is a healthy environment in balance withnature, says Marriott, who does not spray the roses in his garden in England orrecommend it for American gardeners.

Modern roses have earnedprominent places in sunny gardens. They are striking enough to plant by agarden gate or the front porch, and they’re easy to grow in flowerpots. Gardendesigners have paired roses with ornamental grasses and with herbs; theyclamber gracefully along a fence rail, and can be trained up to cover an arboror trellis.

Letnew roses have a little bit of extra space to grow for their first year or two,Marriott suggests, and then you can let annuals and perennials jostle them alittle. Try roses with geraniums, dianthus, asters, daisies or dahlia, he says.”That’s the fun part of gardening,” Marriott says, “seeing whatyou can put with them, ordering new plants, seeing how well they develop.”