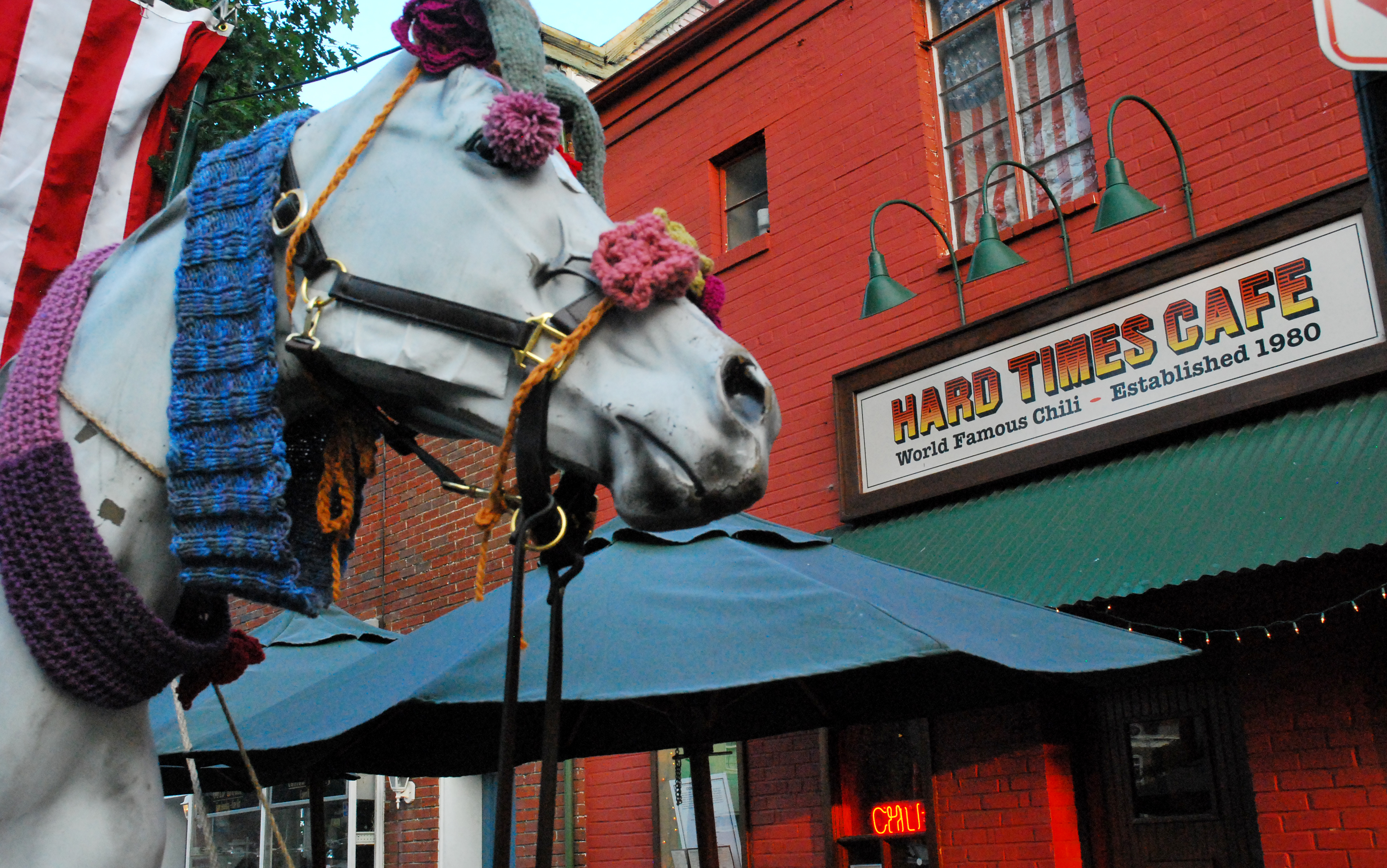 From store-front church to hallelujah chili. It was a perfect transformation for the building that for the past 30 years has been home to Alexandrias Hard Times Cafe.

On July 16 and 17 brothers Fred and Jim Parker will celebrate the three-decade anniversary of their venture into the restaurant business. They opened on July 20, 1980.

Given the recent heat indexes, it may prove to be quite an authentic event. The day they opened the temperature was 101 degrees.

The owner of the restaurant across the street at that time said we wouldnt last three months. Hes gone. Were here, said Fred Parker, co-owner of Hard Times Cafe at 1404 King St.

Prior to opening Hard Times, Fred worked as a graphic designer for the National Gallery of Art and Jim was a financial officer for a D.C. consulting firm.

Jim and his wife, Monica, have really gotten into the art of chili creation. Monica won both the Red and Green chili cook-off at the 2010 Kidney Foundation competition in Washington. And, Jim has become a competition chili cook, Fred said.

In 1994, at the world championship, he placed eighth out of 350 cooks. Jim is always tasting chili recipes and checking their temperature. He is known among his chili-cooking colleagues as Doctor Chili.

At the beginning I was working with an accounting firm and when Fred said he wanted to start this restaurant so I figured it would be a great accounting laboratory. But, I also did a lot of dish washing when people didnt show up for work, Jim said.

They started to raise funds by having cook-offs at Oronoco Bay Park for the National Kidney Foundation.

In the process, I decided to try my hand at cooking chili, Jim said. I feel extremely fortunate that the Cafe has done so well and that we have been able to provide employment for so many excellent employees over the years.

As a graphic designer Fred Parker had contracted with Murray Photo for exhibitions at the National gallery. Murray, who was closing his business, owned the building at 1404 King St. and asked Parker if he knew of anyone who wanted to open a restaurant there.

The decision was instantaneous, according to Fred Parker. With a loan, secured with Freds Del Ray home, he and his brother Jim birthed the Hard Times Cafe.

It wasnt just a stroke of luck that these two chili fanatics established one of the most revered chili parlors, not only in the D.C. area but also the nation. Its in their genes.

While still at the National Gallery, Fred had set up a chili parlor in his home. Neighbors would drop by for chili macs (chili over spaghetti with cheese) and conversation.

The Texas chili served at the Hard Times Cafe and what he served from his home chili parlor is a family recipe handed down from the Parker brothers cowboy grandfather. Plus, Aunt Erma served the same recipe in her Compton Cafe in Oklahoma. It gives our customers a direct connection to the real stuff, Fred said. They also serve Cincinnati-style chili.

That family connection to the western frontier and the days of cattle drives can be seen on the walls of the restaurant. Each tells a family story.

There are photos of their grandfather at a Wyoming ranch in 1926 taken by their father, Fred T. Parker, western B-movie posters from the 1930s, 40s and 50s, and a photo of Will Rogers enjoying some of that family chili recipe.

Will Rogers once said he always judged a town by the quality of its chili, according to Fred.

In a booth on the restaurants second floor Freds framed collection of original cartoons making reference to chili can be found. Another upstairs wall features the original photo of the baby in a tub that became the official logo of the Hard Times Cafe only without the telephone and wide brimmed news reporter hat with a press pass in the hatband.

The kid in the tub was a photo taken during the hard times of the 1930s Great Depression, Frank said. Thats why we call it the Hard Times Cafe.

But probably the most recognizable image of the Cafe is the old pickup truck with a large white wooden horse in the bed and an American flag from a bar across the trucks cab. It has become an essential tourist photo op.

Ive always liked old trucks, Fred said. We were at a chili cook-off in the early 80s when I spotted this truck. I thought this would look good in front of the Hard Times, Fred said.

Although the truck only cost $2,000 originally, it has cost the Parker brothers a great deal more over the years, according to longtime Cafe patron and chief maintainer of the vehicle Mike Huhn, owner of Huhns Shell Station at Henry and Oronoco streets.

Ive been going to the Hard Times Cafe since it opened and Ive been taking care of that truck since Fred bought it, Huhn said.

According to Parker, its a mutual exchange. He keeps the truck running in exchange for chili, he says.

But, theres more to it than that, according to Huhn. Its been nearly demolished about three times. One time a delivery truck hit it. Another time it was a drunk driver. I find people to keep it operating. One time I took it to Manhattan for a chili cook-off, he said.

As for the Cafe, Huhn says, Its the best place there is to get your moneys worth with a wide variety of food. The only thing thats changed in 30 years is the menu offering. Theres so much more now. But I still prefer the Cincinnati chili. Its easier on the veins.

His praise was echoed by another longtime regular customer, golf pro Alan Burton.

Weve been eating there since 1982 when Fred and Jim were getting their feet wet, Burton said. We really love that place. I first was introduced to it when I was in the Army and stationed here. Not only is the food great but so is the staff.

Some of that staff dates back to the beginning. Terrie Charping was hired prior to the opening. Cook Sandy Karpe began after the first year. Other longtime employees are managers, waitresses and family. Freds son Ned, a senior at Lynchburg College, serves as a host during the summer.

Brad Henry of Oklahoma brings his staff in every year when hes here for the Governors Conference, according to the owners.

In 1991 some Hard Times lobbyist patrons decided chili should be proclaimed Americas official sustenance. So, U.S. Representative James Inhofe of Oklahoma introduced House Joint Resolution 337 during the first session of the 102nd Congress. It was backed by the newly formed organization CHILIUSA Chili Heads Interacting for Legislative Initiative.

We dont really try to get the legislation passed. Then we wouldnt have anything to lobby for or talk about, Parker said.

What will be talked about is the upcoming anniversary celebration. In addition to the restaurants celebrated menu, which will not change for the occasion,  there will be entertainment by Mr. Spoons.

This international talent will go table to table playing spoons to accompany songs on the 1946 jukebox. Originally from Cincinnati, Mr. Spoons is known throughout the world. I had a Japanese tourist in here one night and he recognized him immediately, Fred said. Mr. Spoons will perform Friday and Saturday nights.

Seating 110 patrons on two floors, the Hard Times Cafe is open seven days a week from 11 a.m. to 11 p.m. Sunday through Thursday and from 11 a.m to midnight Friday and Saturday. The Cafe is living proof of the American dream two brothers who, in Freds words, learned the restaurant business by doing.