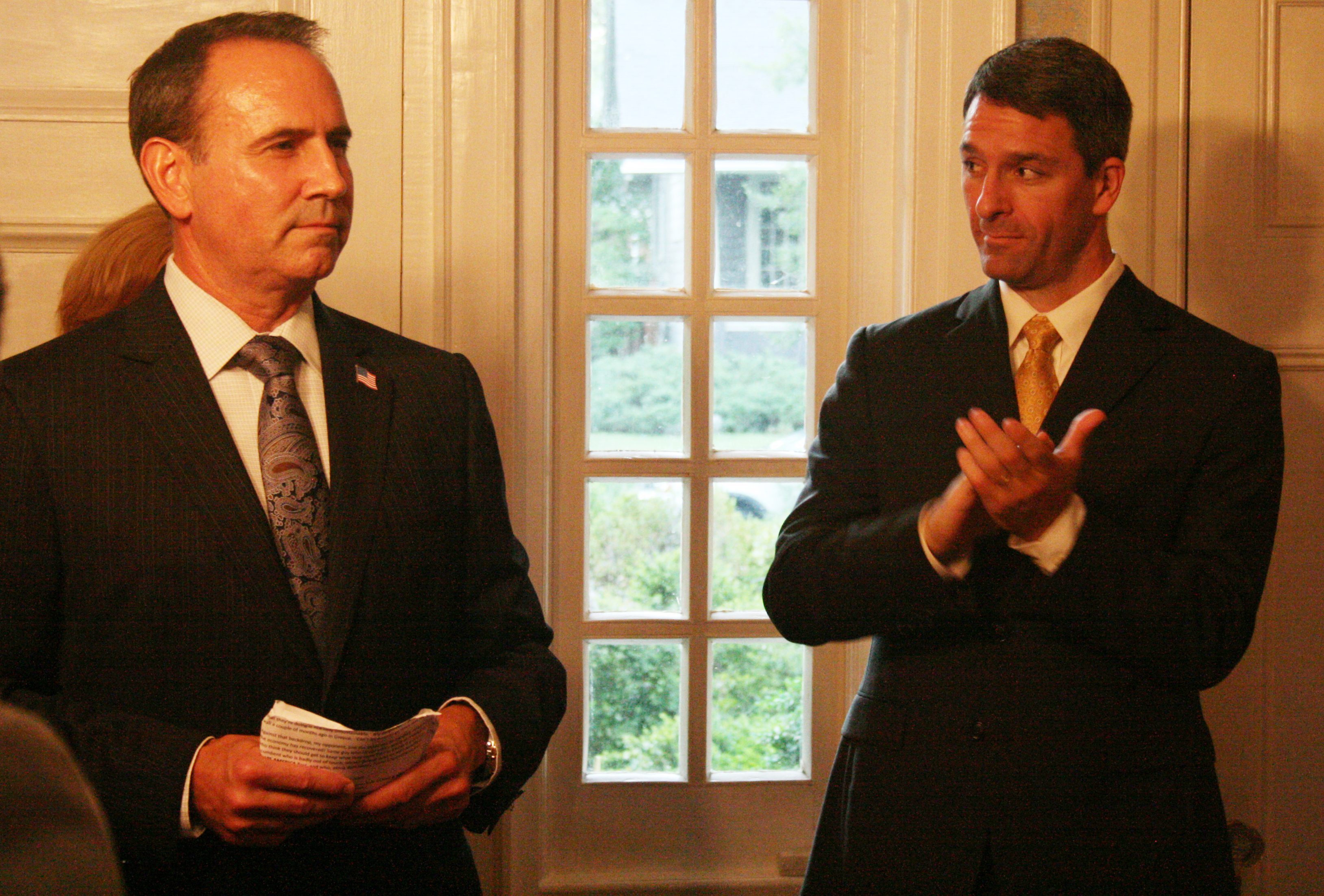 Faux diamond-studded “Murray for Congress” campaign pins clung to the dress straps of some female fundraisers Monday night at a private residence in Rosemont, providing an apt nuance to a function with one goal: Raise $15,000 for Republican Patrick Murray’s congressional bid against incumbent and fundraiser extraordinaire Rep. Jim Moran (D-8).

What better way, organizers thought, than to bring Attorney General Ken Cuccinelli in as the headliner? He proved dexterous in raising money for his 2009 campaign and is seen by many Virginia Republicans as the party’s torchbearer.

But if Cuccinelli is the GOP’s torchbearer, to Democrats, he’s a fire starter and it’s no secret that Murray needs Democrat votes to unseat a long-tenured 20-year veteran in Moran.

Even Cuccinelli said so Monday night: “It takes an awful lot of different things to make one event come together and to run a whole campaign,” he said. “Especially when you’re in tough territory; and the 8th District is tough territory. But if it weren’t possible, we wouldn’t be here.”

The soiree helped raise more than the $15,000 goal, according to Murray’s campaign. But in a starkly Democratic 8th District, that money may not redeem a positive return on investment.

Cuccinelli’s high profile activities since becoming attorney general in January telling state schools to rescind policies banning discrimination based on sexual orientation and suing the federal government over health care reform and greenhouse gas legislation have not been Democrat-friendly.

“Just because the attorney general is headlining an event for Patrick doesn’t mean they are 100 percent congruent in everything they believe,” said Mike Lane, Murray’s campaign manager. “I can say very sincerely that Jim Moran is more controversial than Ken Cuccinelli.”

Murray said he does not believe in the political concept of “guilt by association” but he said he agrees with the attorney general’s decision to file a suit, arguing health care reform’s unconstitutionality, against the federal government.

The issue is constitutional, not political, Murray said, “so I’m honored to have Attorney General Cuccinelli’s support. There’ll always be somebody who likes what he does and other people who don’t like what he does. That comes with being in a position of leadership.”

He added that while there is nothing wrong with wanting to insure the country’s population, the recent reform legislation “was not the way to do it.”

Republicans look to take over the House this November by capitalizing on anti-incumbent sentiment and voter fatigue of entrenched candidates. Murray is no different. He has touted his political inexperience as a leg-up in Washington, where he looks to replace the old guard and help establish a new order. He will need money, but he will also need votes to defeat Moran  which is why having a nationally known name like Cuccinelli’s behind him may come at a cost in the Democrat-heavy 8th District.

“You can tell a lot about a candidate by the company they keep,” said Alexandria Democratic Committee Chair Clark Mercer, “and Patrick Murray has gone out of his way to promote two of the most socially conservative and divisive politicians not only in Virginia, but in the United States. First it was George Allen headlining an event for Patrick Murray, now it is Ken Cuccinelli.”

Murray’s association with Cuccinelli did not surprise Moran, who called the duo “practically identical” and saw the endorsement as a “coup” for Murray’s campaign.

The endorsement also ties the two Republicans together for the campaign’s duration and provides voters with a stark snapshot of the race.

“Mr. Cuccinelli has taken positions that I disagree with but I think he’s refreshing in that he has a strong point of view,” Moran said. “He’s at least transparent. He doesn’t believe in government particularly federal government but we ought to have different points of view. It’s a good thing for people to have clear arguments to inform the issues.”

“Sometimes elections provide voters with very real contrasts; the election this November is one of them and Patrick Murray has decided that being on the far right is where he can best serve voters in the 8th Congressional District,” Mercer said. “Respectfully, I disagree.”

Cuccinelli’s visit seems to have widened the rift between Murray and Moran and, subsequently, their supporters. The question becomes which disparity will prove more appealing to voters: Murray’s disaffiliation with the old guard House or Moran’s disconnect with Cuccinelli’s politics.