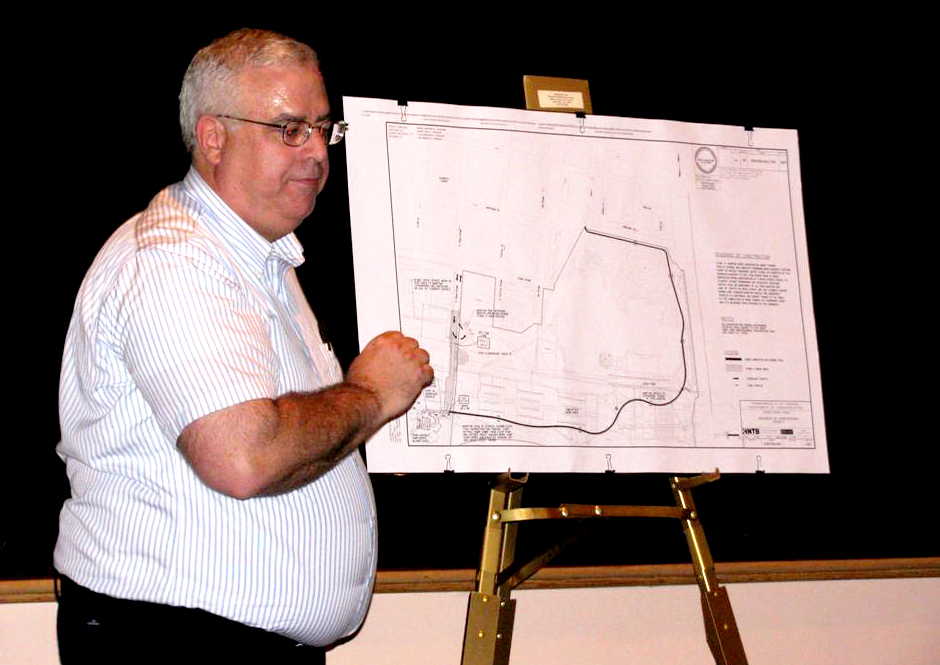 Although there was a lot of lip service given to compromise and having additional meetings, the essence of Tuesday nights public meeting concerning the construction schedule for Jones Point Park was best summed up by former House of Delegates member and chair of the Virginia House Appropriations Committee Vincent F. Callahan, Jr., now an Alexandria resident.

I can tell from what Ive heard here tonight, and from my experience dealing with the Virginia Department of Transportation, that you may get some tweeting around the edges but nothing is really going to change, he warned others attending the Lee Center gathering called by Rep. Jim Moran (D-8) and Mayor Bill Euille.

The 18-month project includes constructing an athletic field, new basketball courts, a new boat launch and restoring a historic lighthouse. The $19 million project, paid for with federal funds, is part of an effort to integrate the Woodrow Wilson Bridge with the park and mitigate its effects on the natural area.

Callahan was referring to a presentation by representatives of VDOT, including a Potomac Crossing consultant, and the National Park Service. No one made a commitment to have the future prime contractor of Jones Point Park agree to phased construction so that the park would remain accessible during the anticipated 18-month project.

We have discussed flexibility in the contract to allow for use of the park during the 18-month construction period, said George Washington Memorial Parkway superintendent Dottie Marshall. But, our first concern is for people in and around the park while the work is progressing.

Administration of the construction contract is VDOTs responsibility, according to Marshall.

Once a contractor is on board we can set an actual time frame for the various work areas, said Bill Barkley, design manager of Potomac Crossings and consultant to VDOT.

When asked a direct question by Old Town resident Yvonne Weight if the park will remain open as agreed to in the 2007 environmental assessment agreement Marshall replied, Until we know how the contractor will sequence the work we cant say what will be open and closed or when.

Marshall compared the park project to the construction of the Woodrow Wilson bridge, which also blocked residents access to Jones Point. The bridge construction impacted 30 percent of the park, she said, while the parks redevelopment project 65 acres will be impacted.

A group of residents claimed that to close the park entirely during the construction process was in violation of the 2007 environmental agreement and the 2000 Record of Decision.

Kicking off the meeting Euille stated, We were caught off guard and only heard of the park closing through the grapevine. There may have been some miscommunication about the park being entirely closed. There will be opportunities for use of the park during construction.

Moran emphasized the need for VDOT and the NPS to use the economic downturn to push the selected contractor to accommodate residents wishes. A $19.5 million contract in this economic climate is significant. Im sure any contractor would be willing to make concessions to win that bid, Moran said.

He also stressed his efforts to get the U.S. Department of Homeland Security to lift the ban on parking under the new Woodrow Wilson Bridge that was imposed after the terrorist attacks of September 11, 2001.

It will be to all our advantage to get Homeland Security to reconsider, Moran said. There are bridges up and down the East Coast that dont impose that restriction. Jones Point Park should be as accessible as possible.

The approved plan for the new park calls for 110 parking spaces on the north side of the park adjacent to the small multi-purpose athletic field and the wetlands. Another 130 parking spaces are now restricted under the bridge, according to Barkley.

During his presentation, Barkley highlighted many of the improvements planned for the park and emphasized the need for the selected contractor to have maximum flexibility in completing the work.

I believe that the project can actually be completed three or four months sooner than the 18 projected, he said.

If phasing construction is mandated in the contract, VDOT and the NPS have estimated that the project will be extended by as much as two years and have an added cost of $2 to $3 million. Moran questioned both the time extension and fiscal impact as being inflated, pointing out that the funds are federal dollars.

Moran asked both VDOT and NPS representatives if it would be possible to get a contractor to commit to phasing the work. Euille, who is a construction contractor by profession, stated, The RFP can be written in such a way as to provide for phasing. Its done all the time and it can be done in this case.

A contractor will be chosen in November through a bid process, according to VDOT.

There was general agreement that the public will be kept informed of any developments both in the bidding process and throughout the construction period. Additional public meetings will be scheduled, according to both Moran and Euille.