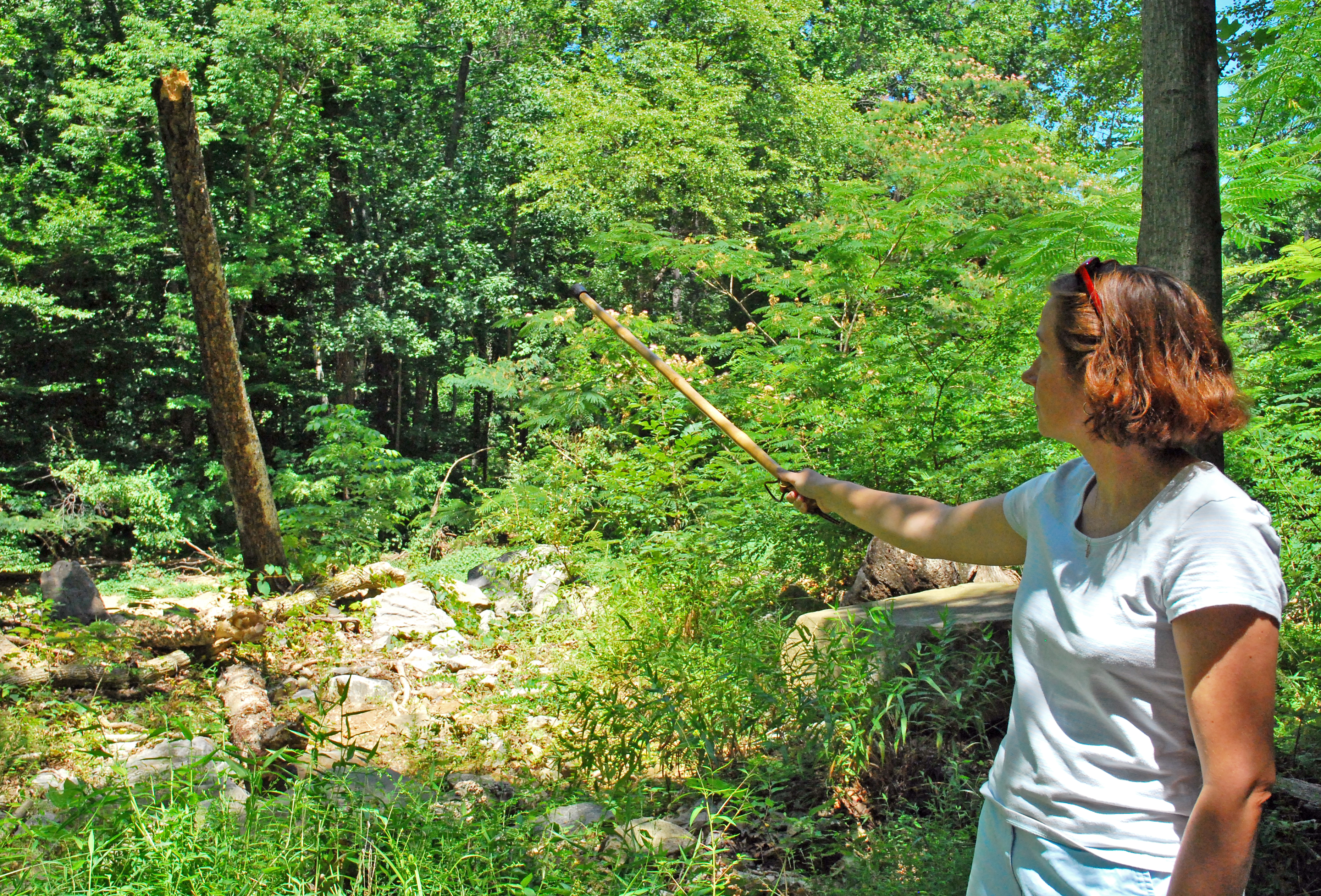 Like they had done countless times before June 13, Leslie Gutowski and her 5-year-old daughter took an early-evening stroll through Dora Kelley Nature Park, a stones throw from their front door, admiring the flora and fauna along Holmes Run.

Technically late spring, many of the plants had just bloomed anew, providing dashes of color to the fresh greenery. Her digital camera in hand, as is most often the case, Gutowski focused the lens on a particularly striking mimosa tree.

The shutter clicked as usual, but so did something else. Instinctively, she quickly ushered her daughter about 15 feet down the path just in time before looking up to see a 40-foot-tall dead tree snap and crumble where they had stood seconds before.

It was a close call, for sure, and a discovery of the highly unpredictable danger lingering above heads all over the city: Trees.

The June 13 experience forced Gutowski to start looking up when she ventured down one of the bike paths through Dora Kelley. What she saw were snags, or several large, dead trees standing within a few feet of the paths or leaning precariously over the trails onto healthy trees. She didnt like it.

And for good reason.

When they do strike the weak or unstable tree branches, or even whole, dead trees, tragic headlines find their way into print. Sometimes even sturdy, healthy trees can turn lethal: Just last month in New York City a toddler was struck and killed by a large tree branch in Central Park.

Alexandria officials last week were unable to recall any grave incidents like the one in Central Park happening here in the recent past.

But with only a handful of people dedicated to monitor and maintain the 17,000 or so trees lining city streets and uncounted more in parks and along trails, city arborist John Noelle said a large portion of the direction for tree upkeep comes from residents.

We really do depend on residents to call our attention to things, Noelle said. We have a small crew and we do not have a system of reviewing every tree in the city, every park in the city, on an annual basis.

After the June 13 scare, Gutowski, having done some homework on dangerous trees, contacted Noelle and city leadership about the potential risks she had noticed at Dora Kelley.

The West End mother received dutiful replies and walked through the park with Noelle and two other city park officials, but felt like she was getting mixed signals. Concerns for safety were also counter-weighted with concerns for preserving the natural habitat, she said.

Ive tried to raise the issue without being alarmist or threatening, Gutowski said on another walk through the park about two weeks later. To me the city built the path for people and I think they should keep it safe.

With between 1,500 and 2,000 calls for tree service each year (usually for trimming or removal) and a small staff to handle the inquiries, Noelle said each case has to be prioritized.

Higher traffic locations like streets and sidewalks take precedent, followed by park areas and then wilderness trails. Like almost anything, Noelle said the risk is always more pressing for those closest to it.

Its hard to say that a tree thats dead along the streets is more or less of a priority than one along a trail or within a park, Noelle said. Everythings a priority, especially when you ask the person whos concerned about it.

If its your house, that one in front of the house is going to be the biggest priority.

At Dora Kelley, where many of the trees reach up 80 feet or more toward the sun, Noelle has tabbed at least 14 trees for removal and several more for some sort of care since meeting with Gutowski. The work should be done by the start of August, he said.

Dave Dexter, a co-chair of the Friends of Dora Kelley Nature Park advisory group, said that in 20 years of walking through the park hes never heard of someone being injured by a falling tree.

Ive been going through that park for many, many years and to be very honest with you Ive never felt that there was any type of hazardous situation in the park, Dexter said.

In all-too-real cases elsewhere, though, those seemingly abstract odds of tragedy striking can carry a hefty price tag. In 2009, a 33-year-old Google employee suffered brain and spinal injuries when a branch fell on him in Central Park. Claiming negligence, his family filed a multimillion-dollar lawsuit last fall, according to news reports.

A similar case in Stamford, Conn., yielded a $1.7 million payout last November to a driver whose car was struck by a tree that had been questioned but not inspected, according to the Stamford Advocate.

Alexandria City Attorney James Banks said the city is generally immune from negligence issues, but has a responsibility to act when notified of a potential hazard and must remain aware of situations where the court can interpret that there should have been notice of a problem.

When we are on notice of a problem with a tree and fail to act to correct it, then our immunity potentially goes away thats the problem that we have to make sure we work with, Banks said.

As long as the city reacts in a timely fashion, Banks said, were in pretty good shape.

Despite the citys unblemished tree-safety record in recent years, theres always a lingering concern for Noelle, the man charged with maintaining that record.

Its something that anybody whos an arborist in a municipal situation has to accept, Noelle said. Hopefully those things wont happen on your watch, but, boy, its something thats always in the back of my mind.