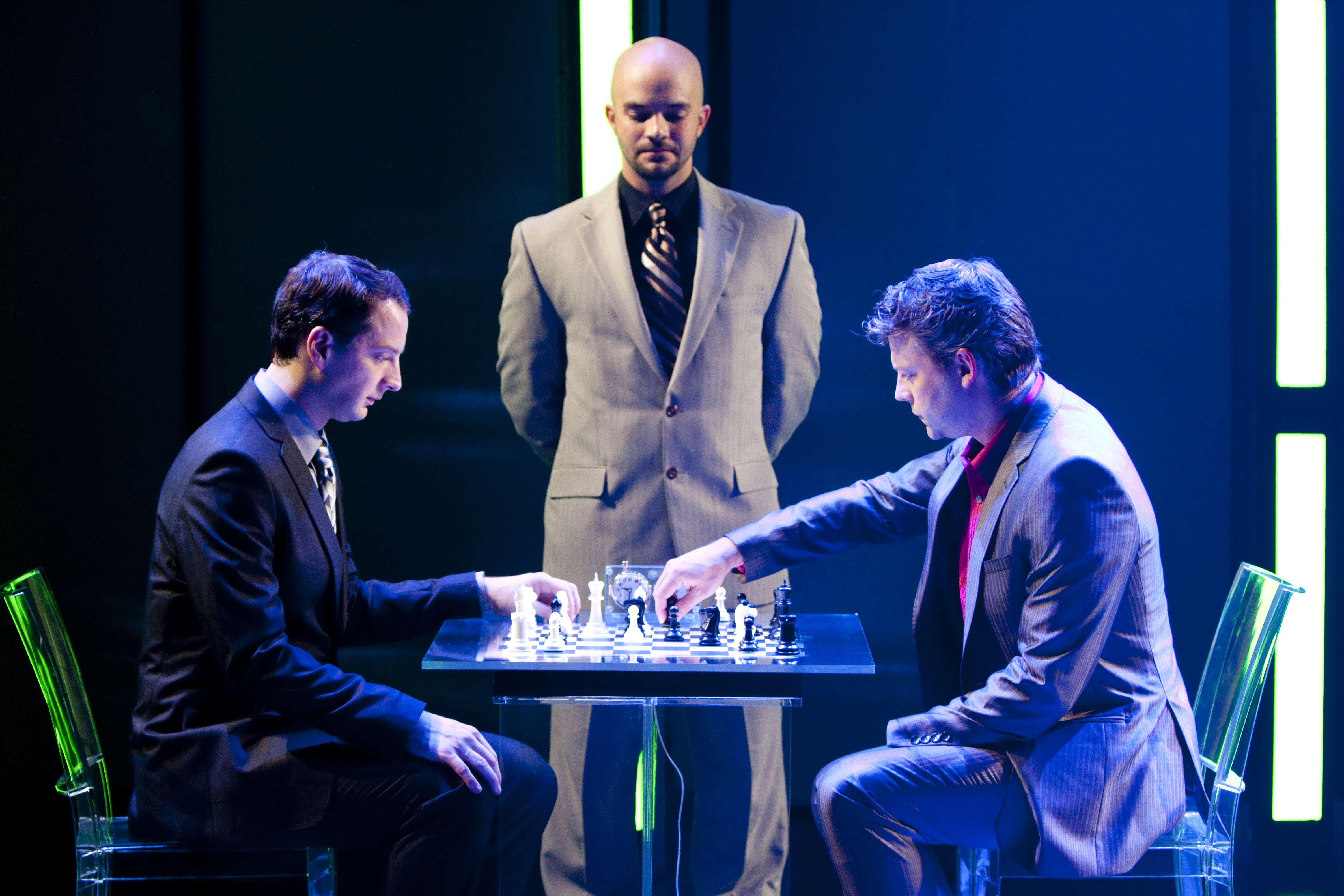 Never leave a moment too soon. Never make a promise or plan. Nobodys on nobodys side.

Chess (Chessat) at Signature Theatre pierces to the soul of everything theater should be. The stage disappears behind emotions real enough to take over a room and then crash over it like a tidal wave.

The scene opens in a warzone: Budapest, 1956. Here is what the play is really about: violence, which for the rest of the musical will boil beneath the veneer of civility that place in the midst of an explosion where a father holds his daughter and sings a lullaby to remind her that everything that truly matters is always between you and me.

Next we travel to 1986 and the world chess championship. Meet Freddie Trumper (Jeremy Kushnier), the American challenger whose singing style is as abrasive as his personality.

Kushniers harsh, rockstar voice is a fitting mask for the character to hide behind, rendering particularly powerful the moments when the facade cracks and his clear, pure voice rings out. While Kushniers falsetto is weak, his musical choices are impeccable for the part. He successfully makes the most obnoxious character in the play sympathetic by showing the audience that Freddie is cruelest when he feels the most, and so is most afraid of being hurt.

He is accompanied by his lovely and cynical second, Florence Vassy (Jill Paice), who spends most of her time cleaning up his mistakes. Act I is about Florence. She isnt afraid to criticize Freddie her employer and boyfriend but her voice and the very way she moves is restrained, as if she is constantly digging her nails into her skin.

In You Wanna Lose Your Only Friend, Freddie pushes her too far. After half an act of Freddie ignoring her, putting her down, and manipulating her, the veneer cracks and the restriction which made Paices acting seem stilted is revealed to be a very effective front.

The story in the first act moves between Florences two solos: Nobodys on Nobodys Side and Someone Elses Story. The power of the first solo shakes the room as Florence admits to herself that her battle is not about America and the Soviet Union, but about finding the courage to strike out on her own. Some of Paices poses were a bit showy, distracting from the heart of the song. However, when she opened up and belted the music, the ground in the theater shook.

In Someone Elses Story, Florence allows herself to dream for the first time in the play. No longer consumed by the struggle for the strength to reject Freddie, she is free to grieve over the love she has lost, and to hope for a love that could be in her future.

It is impossible to say enough about Euan Morton as Anatoly Sergievsky. The Russian chess champion has the first solo in the musical, and Mortons voice stuns the audience, carrying the fear and bitterness of a hunted man. Anatoly has sacrificed everything for the sake of his ambition, and now, standing at the top of the mountain, he discovers that he has nothing left but the fear of falling.

Morton did a fabulous job maintaining a believable accent throughout the musical without letting that accent detract from his singing a challenge at which other actors in his shoes have struggled. Morton sang with every fiber of his being. The audience was left with the sensation that they had received the gift of a human soul, filling the room as sound.

The acts final song, Anthem, has the potential to stick out as a trite, patriotic song in a play about human emotion. But Mortons rendition nearly brought the audience to tears. He made the song breathtaking, a reminder that a nation is something far beyond human borders, battles and limitations.

The love between Florence and Anatoly feels natural even after such a short acquaintance; so much so that their kiss seems not premature but inevitable. It is as if their love is not the result of compatible personalities getting acquainted, but rather two souls who have only to open their eyes and recognize one another.

The Anatoly and Florence of Act II are different people. Their voices and actions are softer, gentled by months of living love. Freddie, on the other hand, is giving off sparks, burning anyone who comes too close. Pity the Child exposes the two Freddies: the coarse, scornful man who battles the world and the lonely child who hides beneath. It is in this song that Kushniers real musical ability is revealed and his touching performance makes the audience wish that Freddie, too, could have a happy ending.

Florence has stopped fighting because for the first time in her life, her happiness is entirely out of her hands. Now she relies on a love that she has given herself up to, even while believing that such a love can never last for her.

Anatolys disintegration is visible and terrifying as he learns that, unlike Florence, he cannot simply choose love without facing terrible consequences. The plays final scene is heartbreaking, as the audience, too, must face that sometimes there is no right choice.

Still we go on pretending
Stories like ours
Have happy endings.

Never leave a moment too soon.