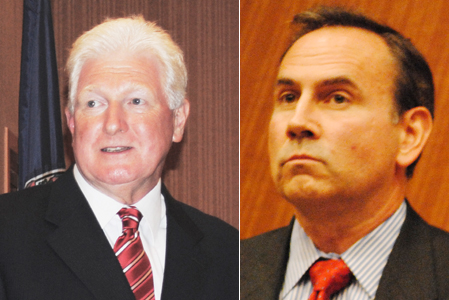 They often strayed from the topic the effect of the economy on local minorities but Moran and Murray fielded audience questions and occasionally delivered on point answers.

This is really all about jobs, said NVUL President Lavern Chatman. Most of the people here are 20 to 40 years old and highly educated with jobs but theyre seeing some of that slip away. We want to know how Congress can work with each other to help. [The Young Professionals Network] isnt political not party-wise but theyre more about wanting things done right.

The Urban League serves mostly black and Latino, Chatman said, so she was a hopeful loan program for entrepreneurs, especially for minorities, would be discussed.

Business owner Chastity Dawson wanted to know if the small business legislation recently passed by the House would work for minority- and women-owned businesses like hers. The act created a $30 billion loan fund available for community banks.

Moran and Murray agreed small businesses are the backbone of Americas economy, and are responsible for pulling the country out of six recessions.

Basically the legislation makes $30 billion available to guarantee that loans that have been made through commercial banks will be paid off, said Moran, who voted for the bill. When it comes to small business lending, if you have any trouble getting your application approved in the 8th District, we will get involved as we always do. If were going to reach our potential, small business loans are paramount.

Our whole country is incentive-based and thats one thing I think the government needs to be more of I would love as a congressman to be able to provide and empower the private sector to create [energy] grids as an incentive to be a country that is clean energy based, which will equal lots of new businesses.

One man wanted to know why affordable housing in Northern Virginia was not actually affordable for most young people, and how foreclosures can be mitigated.

Moran pointed to legislation he helped passed while sitting on the Alexandria City Council in the 80s that mandated the preservation of affordable housing. He pointed also to Congressional legislation protecting consumers from overzealous loans that led to the national economic crisis, but said owning a home is a crucial asset.

The reality is unless you own an asset like your own home youre really never going to achieve financial independence, Moran said. In terms of mortgage relief unfortunately you cant force banks to do things they dont want to.

Murray, a retired Army colonel, related a hard-knocks story to the crowd. He blamed the lack of affordable housing on career politicians like Moran.

Ive earned and gotten everything Ive done on my own. Sometimes you dont get to live you where you want but thats just a symptom. The problem is right here, Murray said, pointing at his opponent.

The discussion turned toward small businesses and entrepreneurial catalysts as Chatman had hoped, but war policy and a broken Washington system cushioned the debate. Its the Democrats inaction at fault, or its Republicans just say no attitude, depending on whom you ask.