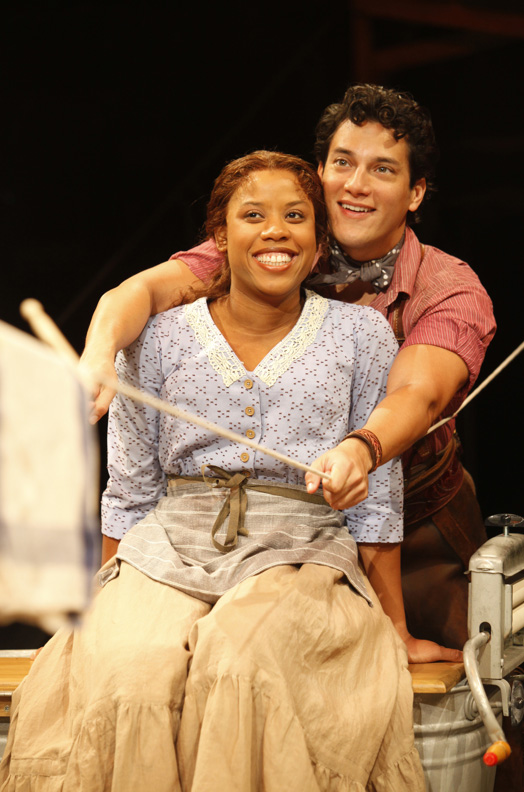 The Mead Center for American Theaters choice of Oklahoma! as its inaugural show for its glamorous new theatre complex has been questioned around town for weeks.  Ive heard comments ranging from, I cant imagine why they would do that old show for their first big spectacle! to Its been staged in every high school in America!

Well, all that is true and irrelevant too.

Oklahoma!, set on the Great Plains of the Midwest, is certainly one of Rodgers and Hammersteins quintessential American musicals and it is only fitting that Arena Stage would choose such a theme to reflect their American Theater nomenclature.  With a sweeping score and portrayals of land rushes and pioneer settlements (who doesnt know its theme song where the wind comes sweepin down the plains), this production seeks to reflect those times with a multi-racial cast that is, as the playbill instructs us, more in keeping with early frontier demographics.

At the Fichandler Stage, a theatre-in-the-round built to accommodate 683 seats, there is no waiting for the curtain to rise.  The view to the stage is both immediate and intimate.  This is both good and bad for the performers, sets, and props, as every glitch every miscue is magnified.   Actors must execute four turns during their lines and numbers in order to play to the 360-degree audience.  But, as no seat is more than eight feet from the stage, the audiences response is visceral.

The incomparable and multi-award-winning performer E. Faye Butler brings her soaring voice and powerful stage presence to the character of the country-wise, no-nonsense Aunt Eller, who is gentle as a mother lamb and mean as a snake when crossed.  Though we meet her on the steps of her porch churning butter, believe me, you would not want to be in her sights when shes toting a gun.

And while there is no doubt in anyones mind that Eleasha Gamble has one of the most tender and beautiful voices around, a perfectly modulated honey-toned sound that could challenge a nightingale, I found her portrayal of Laurey to be one-dimensional and without subtlety.  She lacks the coy factor necessary for us to believe she gives a hoot about Curly.  (In all fairness she jumped into this role with two days notice.)  Yet her voice shines in the duets Surrey with the Fringe On Top and People Will Say Were in Love.

The strength of this productions success comes from the supporting cast.  Nicholas Rodriguez, as Curly, was vocally outshone by secondary cast members, Aaron Ramey as Jud Fry and Cody Williams as Will Parker. Williams, slim as a minute, ripped up the stage with back flips, leaps, high kicks and soft shoe along with the casts other crack dancers.  This reviewer thought he and local high school junior June Schreiner, who plays Ado Annie like a fierce and adorable little minx, were captivating together.

Aaron Rameys Jud, the dark and brooding farmhand, showed both depth of emotion and breadth of vocal range.  Another standout was Nehal Joshis comic relief as Ali Hakim, the Persian peddler and ladies man.

There are no sets in this version of Oklahoma!, leaving it to the audiences imagination, a tall order for the seasoned theatergoer who has seen spectacular sets designed as high as an elephants eye.  Yet gratefully, this production embodies vitality and high energy, including breathtaking choreography, thanks to Parker Esse and David Leongs brilliantly executed fight scene.