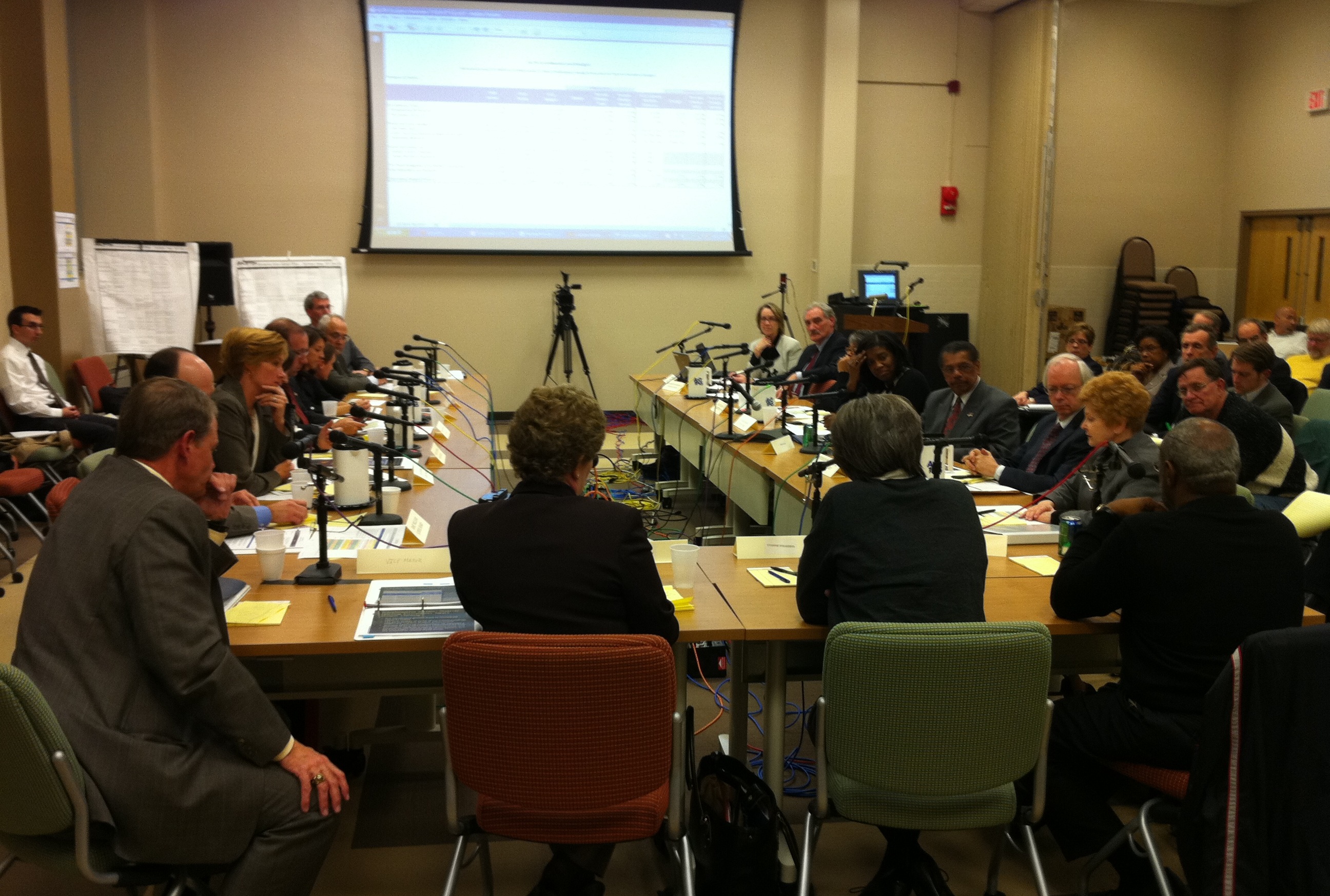 School officials spent Tuesday night at George Washington Middle School trying to convince the city council that the education system merits every bit of money it gets and needs more to foster and sustain improvement.

The rare joint work session informed city council members of the school districts progress as well as its needs a gauge for the decision makers before deciding how much funding to allocate for Alexandria City Public Schools next year.

I must be frank with you and tell you that when council was talking about a two-percent increase [in the next ACPS budget], I got very worried, said Alexandria School Board Chair Yvonne Folkerts.

The Alexandria City Council does not want to raise tax rates to fill budget gaps, Mayor Bill Euille said early on. School Board member Mimi Carter pushed back, noting Alexandria is still one of the lowest tax districts in the region. Its not set in stone just a starting point to guide decisions, Euille said.

We have a lot of challenges and few dollars, but were going to work together to craft a final budget thats a win-win for everyone, Euille said.

The school system is slated to spend almost $200 million this fiscal year. All but about $33 million comes directly from local taxpayers. But even with a 5 percent increase of the citys allocation, next years budget will struggle to maintain the current level of services, according to the ACPS presentation.

But before the board and Superintendent Morton Sherman asked for more money, officials sought to prove the worth of their cause with statistics especially one: a system-wide improvement among every sub-group on standardized tests. Students who are disabled, black, economically disadvantaged, Hispanic, limited English speakers or a combination of these have historically performed worse than white students. They still do, but the gap has closed slightly, Folkerts stressed.

Its a remarkable achievement, said school board member Arthur Peabody. Weve never done that in the City of Alexandria before.

Still, T.C. Williams is one of the worst performing high schools in the state and several Alexandria schools perpetually fail government-mandated standards. Taxpayers paid about $19,000 per pupil between the 2007 and 2009 school years when ACPS earned the dubious distinctions.

Amid reports of Sherman spending significant money on meals with a consultant who is also a longtime friend, the ACPS report stated they have been responsible stewards of taxpayer dollars.

This year is the third straight in which the budget has decreased and the cost per pupil has dwindled to $17,000 under Shermans watch. Achievement levels have improved lately, albeit marginally, proving efficient spending, Folkerts said. Doing more with less is reason for extra investment now, school officials hope.

If three years from now we have not achieved our goals we have no right to ask the school board and the city council for funding, Sherman said.

Arlington has had a commitment to pre-K for over 10 years and Ill let their results speak for themselves, said Sheryl Gorsuch, school board vice chair. I dont want to leave tonight without having an explicit understanding with city council over where were going next. We have expanded pre-K with federal funds but thats [through] a one-time [grant]. Were woefully behind the rest of the country.

The citys allocation to the school system is the biggest of all its expenditures year after year. Tuesdays deliberations were the first of many before the budge passes next spring.

Olivia Anderson - August 18, 2022
By Olivia Anderson | [email protected] Lauren Crisler launched her new candle business, Bashford & Pitt, in April 2021. Although she had been making candles for...