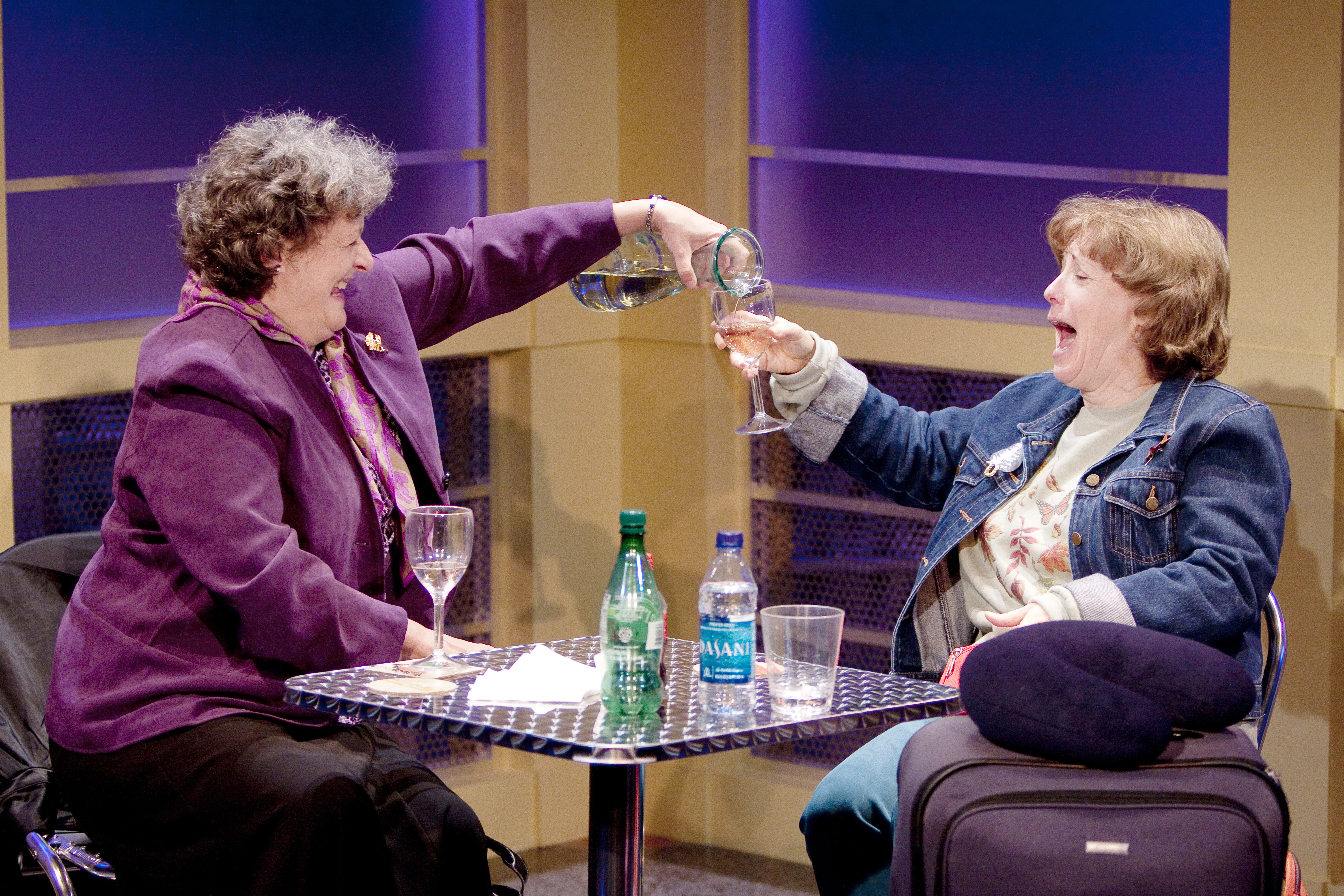 Margaret and Patty dont like each other very much. They are cut from different cloth.

The setting of Joe Calarcos Walter Cronkite is Dead is the stained-glass windows and soft yellow color of the Cesar Pelli-designed Ronald Reagan Washington National Airport, where our disparate travelers meet after their respective flights are delayed. The women share a table and a gut-spilling conversation. Patty is hostile to Margarets elitism and Margaret to Pattys boorishness, until they let down their hair after some mutual tippling.

The wine-swilling Margaret mourns the end of pre-Walter Cronkite days when people dressed properly for dinner and the theatre in gloves and gowns, while the feisty motor-mouth Patty, played with rat-a-tat timing by Edelen, bemoans her daughters alienation. Patty is an over-explainer too much information for the staid Margaret until they swap the anxieties, failures and neuroses that construct their personal lives and discover they are not all that dissimilar.

Scratch beneath the surface of a middle-aged woman, playwright Calarco seems to say, and youll find a lonely, frightened, frustrated widow in this case two of them.


Walter Cronkite is Dead made me nostalgic for the brilliant writing and acting in the old sitcom The Golden Girls with its weekly life lessons in men, children, politics and sex after age 50.  And though there are no more seasoned actors than Edelen and Robinette, the comedy here feels strained, as their characters in turn point out each others faults and pat each other on the back in dizzying fashion.

Calarco uses a quote from Walter Cronkite to explore the political landscape in his play, In seeking truth you have to get both sides, Cronkite sagely said.  Yet Calarco pokes and probes our oversimplified media-defined profiles of Red and Blue States and comes up empty-handed.  He seems to ask, Are they really opposites or merely frustrated voters with a different message?  In this play the lines become blurred as the cold hard assumptions Patty and Margaret make about each other are merely glossed over through sympathy or pity.

There is self-examination, as when Margarets long-repressed spirit emerges: I want some chaos in my life, she pleads. My borders need to change! And Patty shows self-determination as she travels without her grown daughter for the first time. But the comedic relief comes with a bittersweet price in this existential exercise being promoted as a comedy.

You may note as I did that Calarco has managed to get his play written, produced, cast, directed, staged, slotted for an opening, and promoted in a major venue in a little over a year since Cronkite passed away. Was he prescient or is it that easy to write and mount these days? Very encouraging for up and coming playwrights! In any case the production is a tribute to his ability and notoriety and that of the two cast members for whom he specifically wrote this piece.