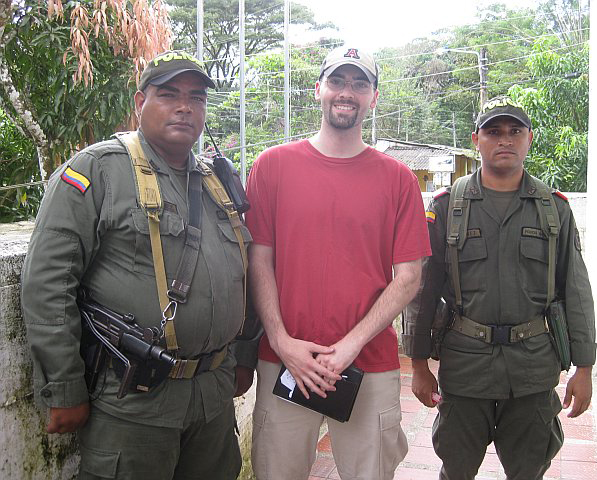 Alan Brownfeld realized the inevitability of his son’s career in law enforcement after a stint as a 13-year-old crossing guard, but he couldnt have known how far the passion would take him.

After serving with distinction as an officer in the Alexandria Police Department for six years, Burke Brownfeld, 28, jumped on an opportunity to explore law enforcement across the globe with the Peace Corps.

Burke now serves as a Peace Corps regional safety and security officer, overseeing volunteers and staff in South American and Caribbean nations, a position hes held since leaving APD in May of this year.

As difficult as it was leaving police work behind, Burke believes in the Peace Corps mission and volunteer spirit. For a man named after Edmund Burke, dedicating his life to serving others was an easy choice.

I loved the excitement of police work, the variety, the challenges, the investigations, Burke said via email from his office in Peru. I was so passionate about the work. But, at the same time, I had always dreamed of putting some of these skills to use in an international arena. I have always had a passion for international travel, and exploring new cultures.

Hes traveled to Colombia twice, helping settle the first batch of volunteers in a country better known here the drug trade and civil strife than as a target of humanitarian aid. Hes also written risk-assessments for other nations, but much of his work is focused on crime prevention.

Volunteers headed to new countries need to know about the culture theyre entering, he said. They also need a safe and secure base and a helping hand if and when criminals target them, Burke said. Much of his work involves liaising with local law enforcement agencies. Getting a chance to see how other countries handle criminal justice is thrilling, he said.

His curiosity is not surprising, given his track record. After giving up the crossing guards sash and badge, Burke began volunteering at the police department as a 15-year-old. When he joined the police explorers, the department became a second home for him.

He kept volunteering through college while working as a 911 dispatcher and security
patrol office at the College of William and Mary. Upon graduation, Burke applied for a police officer position with Alexandria the only job he went after.

For six years he served in Alexandria, earning two medals of valor along the way. Sgt. Sharahm Fard was with him on one of those calls, when they kept a woman from committing suicide before their eyes.

When Burke wasn’t chasing down criminals, he handed out donated coats from the back of his trunk or bought lunches for the homeless. It wasn’t a surprise when he made the leap to the Peace Corps, though the department felt his loss, Fard said.

Burke doesn’t know what the next challenge is, though he believes returning home is in the cards. He’s got no immediate plans, but running for sheriff is a distinct possibility, he said.

The thing that Ive found for me, what makes me happy is just helping people, Burke said. I tend to have a natural calling for law enforcement or security jobs … I’m definitely interested in a leadership position. I feel like its a calling for me and Im kind of keeping my eyes peeled at whats going on locally.