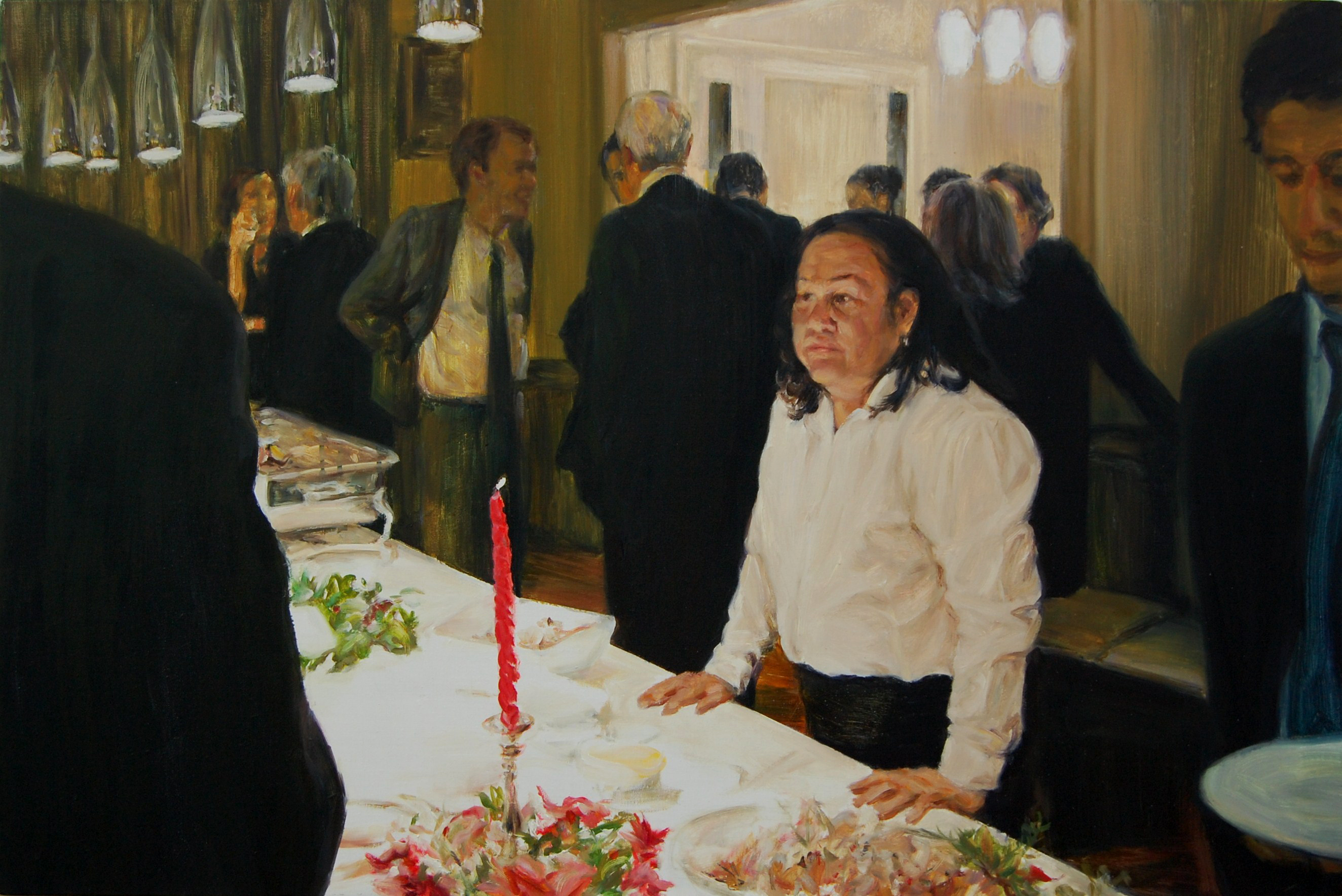 Every artist in Target Gallerys Mixing Bowl exhibit is an immigrant. Its tough not to be, because theyre all American, too.

Mixing Bowl examines immigrations permeating role in American society. It doesnt beat you over the head with ideology, but makes viewers think and react based on their own experiences with the topic.

I wanted to bring and foster a discussion, a dialogue about immigration, said Mary Cook, director of the consistently topical national gallery. We came up with the mixing bowl idea based on immigrants making America a better place when it was founded, rather than keeping immigrants out.

The 16 pieces of all media fill the small Torpedo Factory room sneakily. Some seem generic at first glance, but expand thoughtfully with a closer look. Hugh Joness Woman in Burka Washington DC is one of these wolves in sheeps clothing. The black and white photograph on fine art paper depicts a woman standing over her prayer mat at the World War II Memorial, completely masked in jet black Muslim garb.

The first thing I noticed was my reaction. I was scared to death, Jones said. Is she a terrorist? I was recognizing my own prejudice.

Like Joness experience with what would become a work of art, Mixing Bowl challenges the viewer to a debate, internally or with others, experiences involving ethnicity, religion and race, and the societal dynamics of immigration, first-generation or otherwise.

This artwork silences the polarizing political headlines and stark ideological debates saturating the country. Not in the sense of right or wrong, but in the sense of forcing viewers to recognize the infinite plurality of immigrant experiences, and their own relationship to the American institution.

Immigration is clearly a hot topic in the media and on political agendas. This can easily be relegated to the realm of talking heads, skewed statistics, and Washington bureaucracy. Nonetheless, it is an important social element. The Mixing Bowl collection sheds light on the human and personal side of this equation, wrote Briony Evans Hynson and Amy Cavanaugh Royce in the jurors statement.

Local artist Stephanie Williams chose absurdity to portray her feelings on the subject in a digital print called Halfbreed Project, Passing. The daughter of black and Pilipino parents, Williams always finds it funny when people look at her quizzically and ask, What are you?

Its always kind of a strange question, she said. My artwork is linked to ethnicity but its poking fun at it.

The self-portrait of sorts shows Williams face, mug shot style a frontal view and a profile with complex typed classifications stemming from her features, reminiscent of a eugenics presentation. Complexion is off, bridge of nose is smaller than expected, one note reads. Lips too small, another one says simply.

Its funny, its ridiculous, its meant to paint a picture about the viewer, Williams said. Its not about one specific thing. Its about raising a lot of questions.

And Mixing Bowl does just that. Other notable pieces include a riveting oil painting by Chevy Chase artist Claire Feng and a mesmerizing interactive video installation by Joseph Ostraff, Prelude: Demonstration of Four Greetings, that entrances the viewer.
—
Mixing Bowl runs through February 27. The opening reception is Januray 13 from 6 to 8 p.m., with a jurors talk at 7.