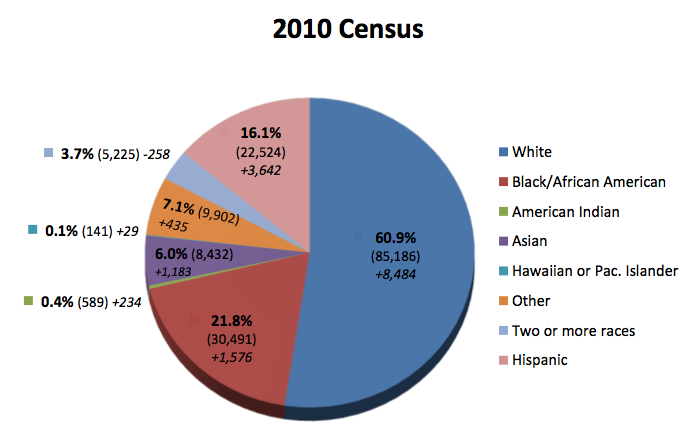 The city has grown in the past decade by about 11,683 residents, according to new census data, and Alexandrias Hispanic population is increasing at nearly double that rate.

Since the 2000 census, the Hispanic population has grown by about 19 percent and now comprises about 16 percent of the citys total population of 139,966.

By contrast, Alexandrias black population has grown by 5.5 percent with about 1,576 newcomers since 2000 about half the citys rate of growth. As a share of the citys total population, blacks have decreased by about 3.4 percent.

The white population has grown by about 11 percent, and now comprises about 61 percent of Alexandrias population, according to census data.

Its not a striking shift in demographics, but it is interesting, said Pat Mann, the citys urban planner.

The things Ive found from the basic data were that we have seen some modest shifts in the racial and ethnic makeup in the population, but nothing dramatic, said Pat Mann, Alexandrias urban planner. Were losing diversity in some ways and gaining it in other ways. Its just an interesting thing to watch as time goes by.

As the minority population grows, theyre also spreading across the city. In the previous 30 years Alexandria has lost many of its traditionally ethnic and racial neighborhoods, Mann said.
Near the turn of the century, the redevelopment of The Berg, a predominately black neighborhood in Old Town, scattered residents to other pockets of the city. The current redevelopment project around Parker-Gray near the Braddock Road Metro station has also diffused the black community as housing prices rise and public housing residents relocate elsewhere.

The historic black community has faded even as its legacy of activism lingers. The neighborhood, still about 32 percent black, is named for two leading educators who provided schooling for black students during segregation. The citys sole public high schools football field also is named for the community.

If the black community is complacent and we dont address [our issues] either with the city or within our own community, our so called piece of the pie will dwindle, Chapman said. I think, just going by the numbers, if you had a super active Asian population, they could probably command the same presence as anybody. I think its all about how active you are as a community.

Ethnic neighborhoods have become blurred as residents relocate, according to census data.

Were losing the kind of identified ethnic districts, even Arlandria, Mann said. The Hispanic population is dispersing throughout the area.

And the surging Hispanic population presents a coming challenge to school officials. There is already a rising demand on the public school systems English language programs, said Superintendent Morton Sherman.

Many of the Spanish-speaking students attending classes at the citys public schools arent recent immigrants, he said. Most students needing the class were born and raised in the United States.

These students are often called heritage speakers, Sherman said. Their families are here and our second generation kids in many cases have not developed some of the core linguistic skills that are needed for school success.

Changing demographics Alexandrias 2011 kindergarten class is a third white, a third black and a third Hispanic isnt the only challenge on the horizon for school officials. The under-18 population is growing as well, up 11.3 percent since 2000.

I think this is a clear indicator that something is happening in the city in terms of schools and capacity, Sherman said. Its clearly a sign that were not only going to have more students, but have even more coming to us.

Though increasing enrollment figures have become the focal point of a disagreement between city and district officials on how much to budget for new schools, Mann doesnt see any major implications within the census data he has examined.

Because we dont see a dramatic change, everything isnt just tipping in some direction dramatically, Mann said. Weve seen some modest shifts comparable with shifts around the region. I dont think there is a big policy issue here.