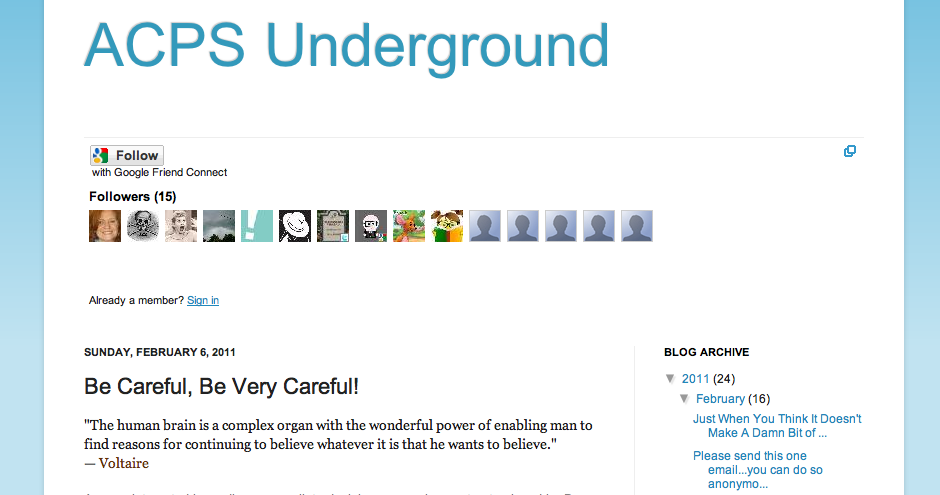 A secretive contingent of Alexandria City Public Schools employees took their gripes to the Internet recently, anonymously accusing the superintendent and school board of poor leadership and ill will toward teachers.

School officials say the ACPS Underground, a blog and the groups primary rendezvous, is counterproductive. While some complaints could have merit, its commentators lose credibility by choosing an anonymous Internet forum over scheduled public hearings, Superintendent Morton Sherman said.

I saw it when it first came out and chose to ignore it, he said. They should have the strength of conviction not to be anonymous, so for me its underground yellow journalism and thats not how we work.

But the site generates discussion most posts have comments in the double digits and a lot of emails to school board Chair Yvonne Folkerts, making it hard to ignore.

The Undergrounds leader, a guised teacher known by the pseudonym Voltaire, said the ACPS environment is not conducive to speaking out. He spoke on the condition of anonymity for fear of retribution. A class action lawsuit has been filed against Sherman for wrongful termination enough of a scare to keep Voltaire and the Underground nameless, he said.

Were extremely worried about retribution, Voltaire said. Its very real. Peoples livelihoods are at stake.

But going nameless doesnt help the cause, says President of the Education Association of Alexandria Gina Miller. Its a belief shared by Folkerts, who said teachers should take advantage of the public hearing portion at board meetings.

I dont think [the Underground] represents any one person, but I dont think they represent a minority, either, Miller said. I think its important to be aware that its around. Like everything else, you kind of filter through what people say.

Voltaire often uses hyperbole to get points across on the blog, comparing the Underground to organizations opposing the oppressive regimes throughout the world. Angry rhetoric over attempts to lengthen teachers school day by 30 minutes dominates the website, flanked by name-calling and conjecture.

Its about more than a longer school day, according to Voltaire and his followers. He has qualms with the speed at which Sherman implements reforms like the Lucy Calkins writing curriculum and Habits of Mind, an educational consultant.

Miller said the blog does not speak for her, but agrees change has been too quick.

Teacher morale is very poor, Miller said. There has been a huge amount of changes and there really hasnt been a lot of time to reflect on them and breathe. It just all comes with so much speed.

Voltaire claimed missing 70 days of classroom time for training with consultants for the new programs.

We just disregard them now. It would be impossible to do all of it its just plain ridiculous that we could comply with all of it, so we said, Lets just go underground and teach the way we know is effective.

When Sherman took the ACPS helm in 2008 the community charged him with righting a ship sinking in low minority achievement rates, an inflated cost per pupil and underperforming schools by federal and state standards. He has lowered the cost per pupil by almost $1,000, according to budget documents, and has seen marginal improvements in the achievement gap between whites and minorities.

Folkerts is quick to point out Sherman inherited a school system that has never fully met No Child Left Behind. And the government mandates a longer school day at T.C. Williams High School, she said. Following its persistently low achieving label, Sherman was forced to choose between four options: closing T.C., exploring a charter school option, firing half the faculty or undergoing a transformation. The latter, which he chose, includes a longer school day.

After deciding against firing half the citys teachers, Folkerts seems perplexed by their sentiments toward the superintendent.

This board has worked really hard to make sure we didnt have any massive layoffs or program cuts, even when funding was strained, Folkerts said.

A school system in dire circumstances deserves action, not inaction, she added.

The school board hired a superintendent that we felt would not be afraid to come in and move this system forward, she said. I understand its hard but we simply cant do business as we always have, we just cant. I have immense respect for teachers and will work with their questions and concerns and help them understand we need them on board.

The EAA and the superintendent have entered discussions on how to compensate teachers for the extra 30 minutes of work, according to Miller. But Voltaire and the Underground continue to cry foul in the blogosphere.