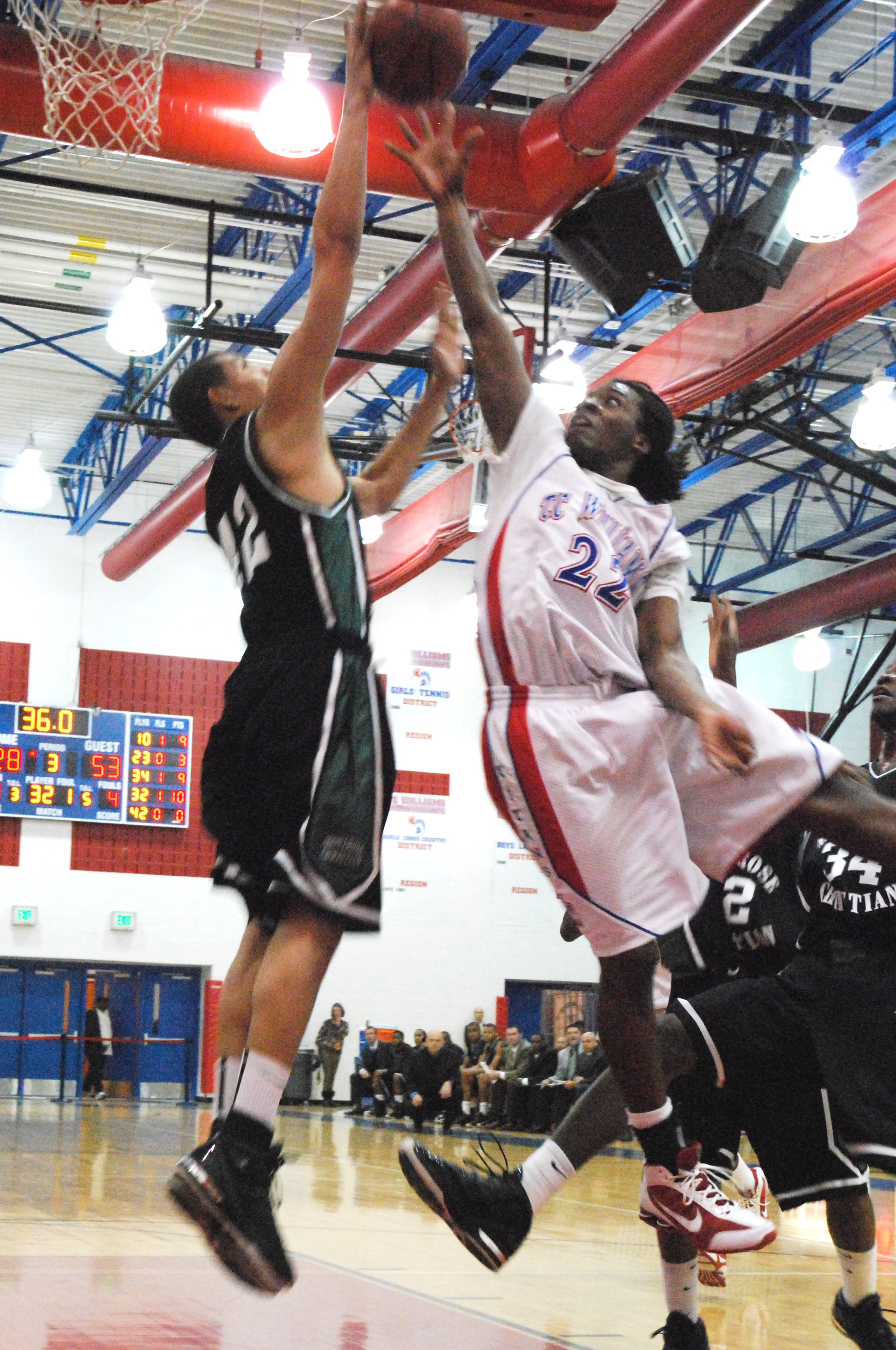 Just days before T.C. Williams was set to take on the premier basketball program in the region head coach Julian King had other things on his mind than Montrose Christian.

“I’m not thinking about that at all,” he said, guiding his squad through practice at the city’s sole public high school Monday evening. “I’m not worried about Montrose Christian. [That game] does not determine the playoffs for us.”

Instead, King wanted to focus on  two conference rivals he expects will give the 14-4 Titans a run for their money on the court. T.C. has dropped four games in recent weeks, including one to Annandale, but still sits atop the Patriot District.

They’ve got a target painted on their chests; a point King drove home to his players during practice.

“It’s not only because we’re on top, but there are a lot of seniors [in the district] who haven’t beaten us on the court,” he said. “Almost every year, we seem to get an all-out effort.”

But if King doesn’t want to look that far ahead, his team knows they’ve got a tough matchup in Rockville Saturday night on the same court that nursed NBA star Kevin Durant.

“This is another big game and we need to play hard,” said senior guard Tyrell Sitton. “We need to play the same way we always play.”

They haven’t adjusted anything in their game plan for the meeting with the Mustangs, he said. It’s all about playing hard and playing as a team a mantra the Titans have held onto throughout the season.

Senior forward Jamal Pullen, one of the team’s scoring leaders, agreed. T.C. is focusing on playing their game, no matter what Montrose Christian, ranked No.1 in the region by the Washington Post and No. 5 in the country by USA Today, throws at them.

“Just got to play hard and do what we always do,” he said. “Play hard and come out with good defensive intensity.”

Which is exactly what Pullen expects the Mustangs to do come Saturday. They’re the same kind of team as the Titans, he said.

“I believe it will be a big game, but we got to take it as any other game,” Pullen said.

King won’t worry about the Mustangs until Saturday morning. The recent losses against Phoebus, Riverdale Baptist, Lake Braddock and Annandale the team that knocked T.C. out of the playoffs a year ago have been a cause for concern. Still, he was pleased with their 64-61 road win against W.T. Woodson last weekend.

“Hopefully we can continue that,” King said. “You don’t come as far as we’ve come and have a few losses and start panicking.”

Though it won’t affect T.C.’s playoff picture, playing Montrose Christian will be a good benchmark for the team’s progress this year, he said. Facing a team of the Mustangs’ caliber will get them ready for the post-season.

“You play the best team if you want to be the best. You want to give your kids the best test possible so that they’re prepared,” King said. “It’s not about the wins and losses, it’s what you learn.”

Despite their coach’s philosophical approach, the prospect of a win against a marquee program is on the minds of the Titans. Ask any of them about their odds against Montrose Christian and the response is the same: pretty good.

“We’re going in to get a ‘W,'” laughed Daquan Kerman, a junior guard. “We go to win every game. We don’t go into any game looking forward to losing.”