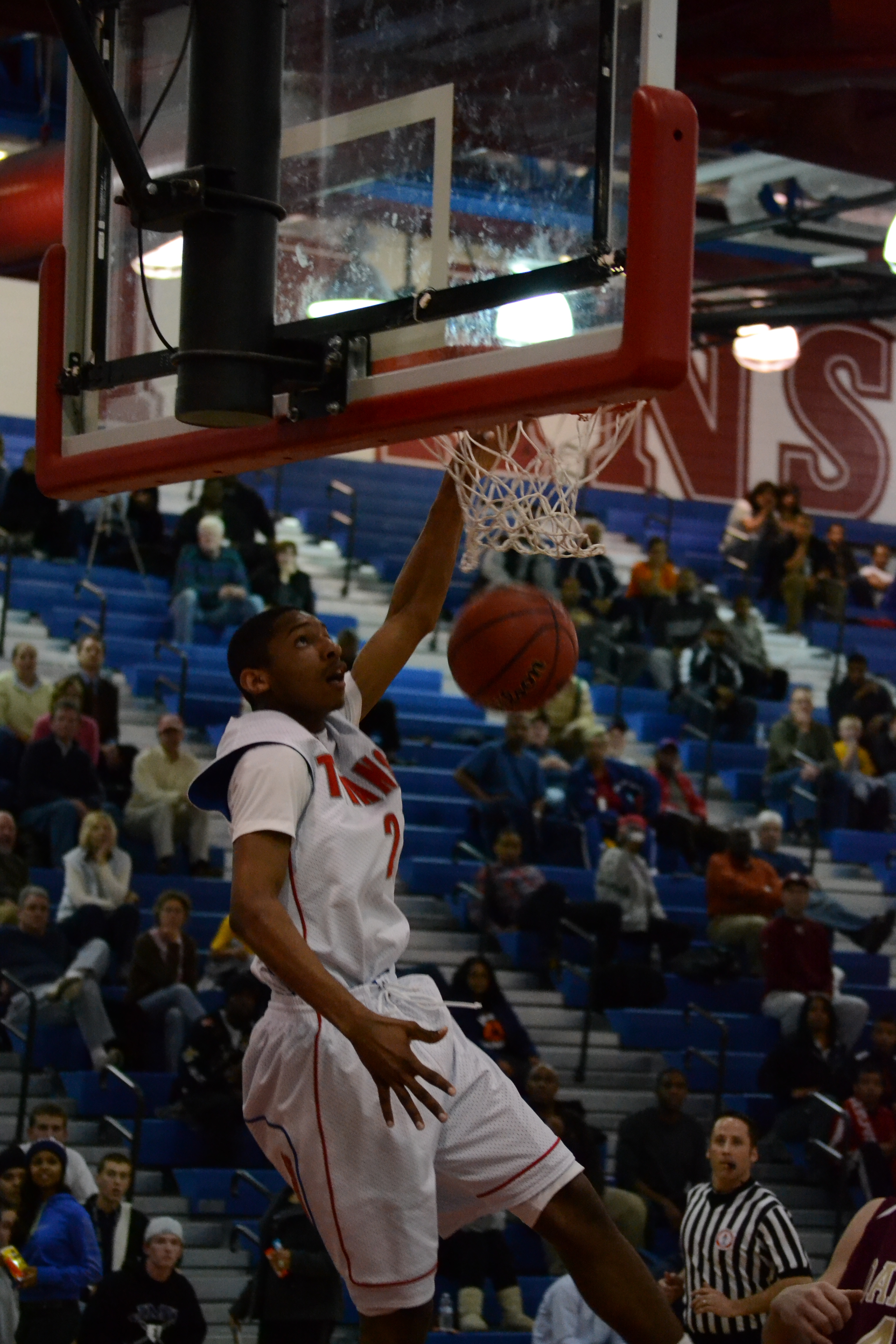 For what their coach considers an off-night, the T.C. Williams Titans quietly tucked away another home win against Oakton Monday night just days after securing the Patriot District title.

Missing in the first half of the 52-32 victory were the forceful, aggressive Titans who have stormed the court day in and day out during the regular season. In their place, a calm, gritty squad worked around the edges, waiting for the right moment to strike at the net.

They were in the zone. Coach [Julian King] told us to be patient, said junior forward T.J. Huggins. We’ve been working on it all week. He said it right from this morning, just expect it.

Huggins saw plenty of action against the Cougars, working in back-to-back baskets to put T.C. up 20-10 midway through the second quarter. After an early game scare, which saw Oakton score first and keep a steady though narrow lead, Huggins and seniors Jamal Pullen and Rick Matthews roared back to put T.C. ahead.

They started the second quarter with a 14-10 lead and the gap only grew wider as the night went on. Despite staying ahead of Oakton, it was a low scoring affair for the Titans until a late game breakout. At the start of the fourth quarter, the matchup had stalled, 34-24, in T.C.’s favor.

They came in and did exactly what I expected them to do, said King. We got a little impatient there and weren’t hitting some of our shots and lagging behind [Oakton].

Senior center Jay Whitmire made it 36-24 to open up the second half, sparking a Titan offense renaissance. Teammate Tyrell Sitton followed Whitmire’s basket with one of his own on an otherwise quiet night for the senior guard. Within minutes T.C. began to pull away from Oakton. By the end of the third quarter, the Titans led the Cougars 45-29.

Critical to keeping T.C. competitive, Matthews lit up the court in the opening round of the regional tournament. It’s the second straight postseason game the senior center has risen to the challenge. Against Annandale Friday night, Matthews came away with 11 points on the way to a 69-56 victory in the Patriot District championship game.

And while Matthews wasn’t everything he could be on defense Monday, King offered some faint praise.

He’s finally coming into his own, King said. For him to be peaking right now, it’s exactly what we want.

Despite coming off the court with a 20-point win over the fourth-seeded Cougars, King believes there’s room for improvement on his squad. The Titans struggled to make shots, he said, and they lacked urgency or focus.

Let’s hope this is an eye-opener, he said. If you lose, your season is over.

That wasn’t lost on Huggins, who watched on from the bench a year ago as T.C.’s season ended in the opening round of the Patriot District tournament. Now a starter, Huggins has a chip on his shoulder, something to prove as the Titans move deeper into the regional tournament.

We just need to work harder in practice, Huggins said. I just have to take out all the anger from seating back last year. You have to do what you got to do.

T.C. takes on the winner of the Yorktown and McLean matchup at 7:30 p.m., Wednesday.