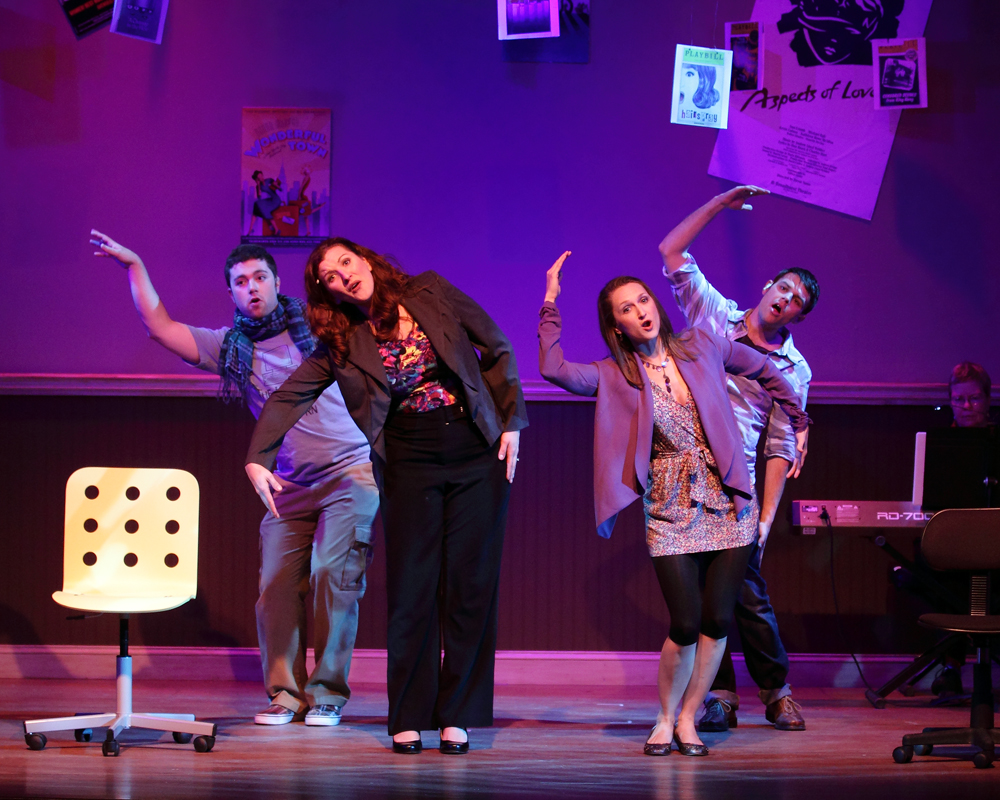 The popular play within a play device is taken to the third power in this cocky musical now playing at The Little Theatre of Alexandria.

[title of the show] (no, this is not my editors idea of a parenthetical joke) is about two aspiring New York hopefuls, an author and a composer / lyricist who enter a writing competition at the New York Musical Theatre Festival. It is a play-within-a-play-within-a-play. Or should I say musical?

That our heroes are gay is incidental to their theatrical travails, but it provides some humor and background. That they are young and inexperienced defines the complex, behind-the-scenes efforts of the post-modern playwright to bring a production to the stage. It is a consummate guide to backstage politics and insider showbiz jargon.

Our two hipsters, Hunter (Josh Goldman) and Jeff (Scott Harrison), have three weeks to pull off the impossible by writing, composing, casting, scoring and mounting a new musical. They engage their aspiring actress / singer pals Susan (Anne Marie Pinto), gainfully but unhappily employed as a part-time receptionist, and Heidi (Sharon Grant), who has a bit part on Broadway in The Little Mermaid, in a madcap challenge to take their musical from writing to final production in three weeks.

When Hunter struggles to put words on a page he tells Jeff, My writing is like a drag queen fabulous at night in the daytime not so much! In fact Heidi and Hunter play a little game of making up and texting amusing drag queen names to each other: Lady Foot Locker and Dorothy Chandler Pavilion spring to mind.

While Jeff plays the straight man to Hunter in this one-liner extravaganza, (Henny Youngman where are you?), the girls alternate between insecurities and mutual mistrust in the number, What Kind of Girl is She? Look for Anne Marie Pinto with her powerful voice and wild gesticulations to rip up the stage in the rock number Die Vampire Die, Susans solution to ridding the show of energy-robbing self-doubt.

While they wait for the financial backing to get their play to Broadway, Hunter considers looking for a day job.

Im down to tropical plant cleaner or donating eggs, he mopes. But in a mathematical calculation contrived to ensure success, the crew determines its better to be nine peoples favorite thing than 100 peoples ninth-favorite thing.

There are 18 terrific musical numbers in this non-stop one act that the boys hope will get them on Ellen. Sit back and let them charm you. And dont bother counting the f-bombs, Hunter does it for you, and they are integral to the script.