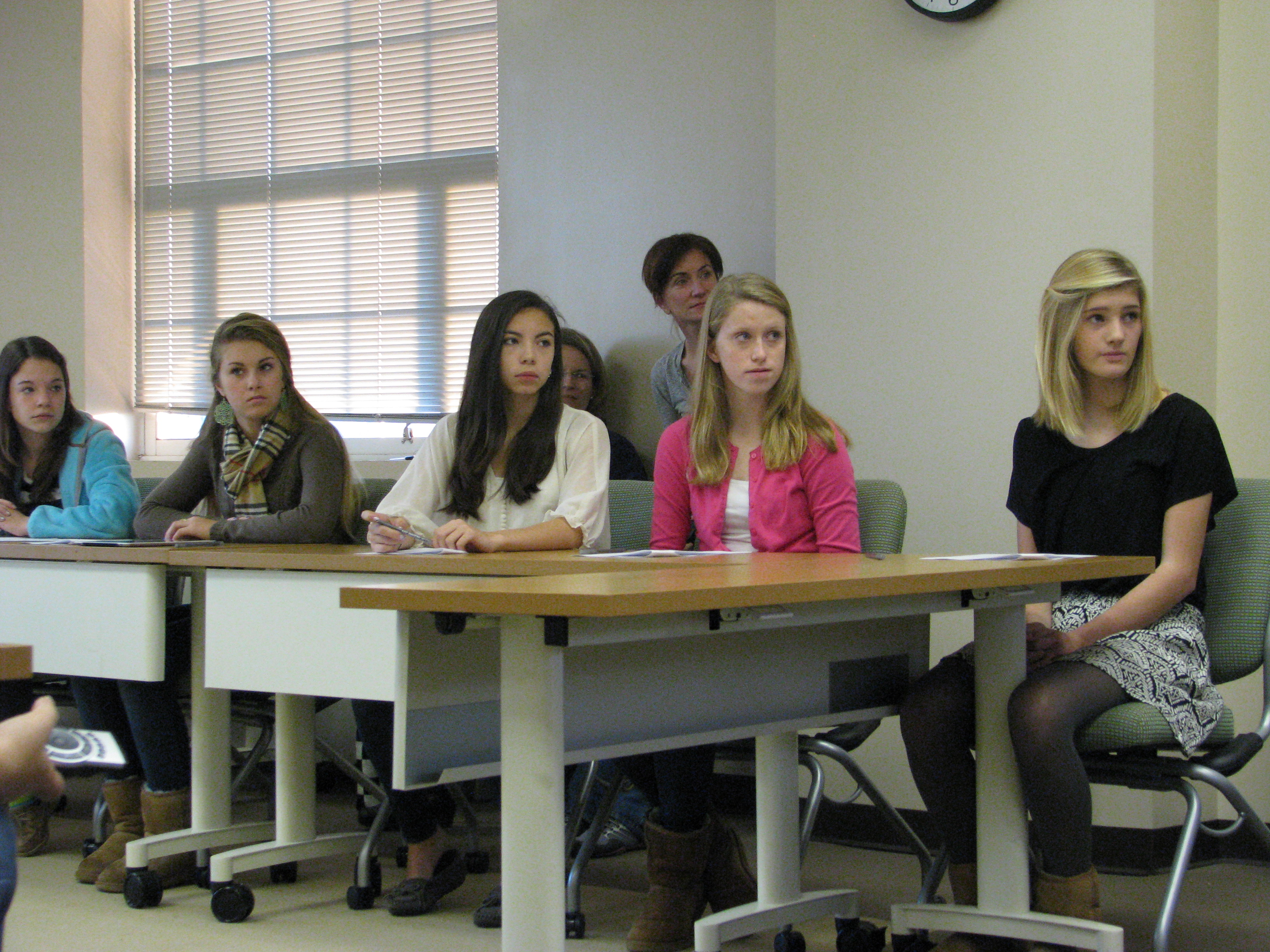 George Washington Middle School eighth-grader Zoe Gage held an iPad 2 up to a video camera Tuesday morning, showing her virtual pen pals in Afghanistan the kind of technology her classmates regularly use at school.

Her jaw dropped and her classmates giggled a minute later when the teacher in Kabul, shown on a monitor at the front of the classroom, translated Gage’s succinct description and pulled out an iPad of her own to give her students in Kabul a better idea of what Gage was talking about.

Later, the 14-year-old said her assumption about her Afghani peers’ lack of technology was just another misconception she held about the war torn nation and its people before taking teacher Kelly Mayer’s contemporary global issues and service learning course.

“I didn’t know much, just the basics of the war and that [Afghanistan] was underdeveloped,” Gage said. “I think that we didn’t give them enough credit. Not knowing, we assumed things about them.”

Gage was one of several George Washington students to speak directly with school children in Kabul for Mayer’s class. It was the first of several scheduled videoconferences between the two groups of students through a program known as Youth LINKS, run jointly by the State Department and the Global Nomads Group.

The hope is to turn the group of 18 girls — the class is off-limits to boys to comply with the Kabul school’s mixed-gender rules — into more active global citizens. They are studying Afghanistan’s culture, leadership, activism, international change, conflict and conflict mitigation as well as the media’s role in both, just to name a few of the curriculum topics, Mayer said.

“I’m really hoping that they begin to develop some of the skills necessary to be leaders in the 21st century,” Mayer said. “Like becoming critical thinkers, problem solvers and … active citizens; developing an appreciation for cultural differences; developing the ability to respectfully discuss significant topics; considering multiple perspectives and seeing connections among ideas and recommending solutions.”

The children, separated by an ocean but linked through technology, asked and answered questions about their lives, schools, cultures and the war. One Afghani child said the constant fighting has come at the cost of educational opportunities and left literal scars on the nation in the form of ruined buildings. Another said people outside of Afghanistan assumed they were constantly warring, which is not the case.

The names of the Afghanistan students nor their school were released to the press because of security concerns.

Gage’s iPad was the first of several “show-and-tell” demonstrations. An American student showed off her lacrosse skills; an Afghan peer donned a bride’s traditional wedding hat. Local student Olivia Braun showcased her guitar playing skills, performing Coldplay’s “Lost” to the applause of the Afghani students. It wasn’t easy at first, she admitted afterward.

“They said to choose something unique to show and I chose [my guitar] because I really love music,” Braun said. “I kind of was nervous. There were people from a different country watching. It’s just nerve-wracking.”

The daughter of a photojournalist, Braun came to the class with prior knowledge of Afghanistan, but she’s enjoyed getting to know citizens of a country more likely to pop up on the evening news than in a classroom.

“You’re not just seeing people from other countries, but learning about them,” the 13-year-old said. “I’ve learned a lot about how they live and how their country is. It’s really cool.”

Aside from offering a “really cool” class, Mayer hopes her students, who came in more than an hour before school started to participate in the videoconference, leave the class better prepared for globalization.