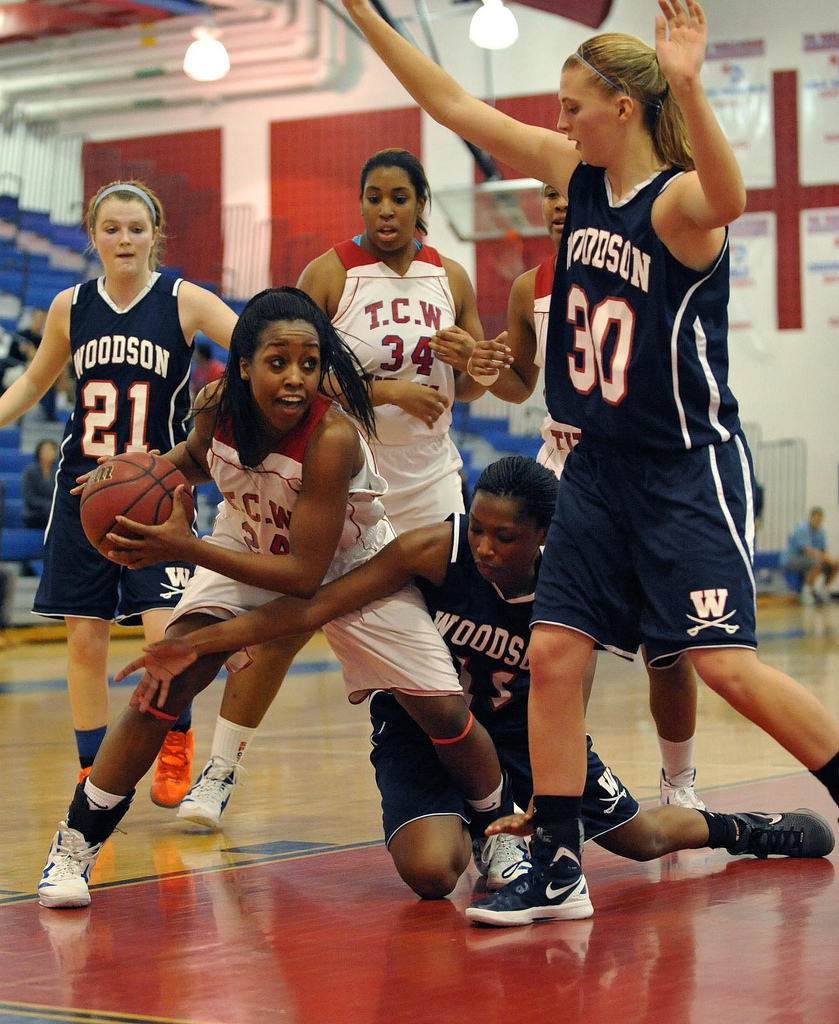 “We don’t get as much support as [the boys],” said Roberts, a junior guard. “We support each other.”

They play like a family, said Moss, echoing her teammates sentiments, and it’s paid off. A year ago, the Lady Titans surged through the three-tiered playoff system before falling to Princess Ann in the state tournament quarterfinal game.

That success has carried over into this season. Where the celebrated boys team has struggled — going 8-7 overall and 5-4 in conference action — the girls have enjoyed an 11-5 record, 7-1 in the Patriot District.

It’s owed in part to a newfound sense confidence after a deep playoff run, Walton said. They proved, without any real postseason aspirations, they could run with the best teams in the commonwealth.

Walton recalls being as taken aback by their results as her players. Then in her first year at the program’s helm, she was busy easing them into her coaching system.

“Honestly, I wouldn’t say [I was] surprised. I had a goal, but my goal really wasn’t taking them to regionals. My goal was to focus on the district and turn it around and take it game by game. When I looked up, we were in the state tournament,” she said. “The funny thing is, that wasn’t even one of our team goals last year. Now our team goal is lets get back to states, we’re able to do it.”

Beating West Springfield is the team’s other core goal. The Spartans have spelled trouble for the Titans these past few seasons, defeating T.C. twice during last year’s regular season and then again in the Patriot District and Northern Region tournament championship games.

They’ve been just as bothersome this season, barely beating the Titans in a 49-48 showdown on January 6. Moss and Roberts will have another chance at the Spartans on January 30, that first loss just a blip on an otherwise solid record.

But despite their continued success, the team has been unable to draw the same level of attention and support as their counterparts on the boys squad. It’s frustrating, said senior guard Sofia Schedler. People say they’re going to the games, but fail to show up, she said. Still, it’s not worth getting upset about.

“What matters is our record, our team,” she said.

Schedler’s practiced indifference aside, the girls use it as motivation, said Walton. The school newspaper previewed the two teams at the season’s start, she recalled. They gave the boys an article and devoted just a few paragraphs to the girls. It’s given them something to fight for.

“The girls are pretty upset about that, that right there,” she said. “The fact that we’re having more success this year, that [lack of notice] is kind of turning around. Our fans are increasing in the stands and now when we get back to the regional or state championship games, they can say, ‘yeah, the girls went there and, yeah, they won.’”

At least one player, Moss, is relishing the thought.

“Now we feel like if we win states, everybody is going to be like, ‘Dang, shoulda gone to their games,’” she said.