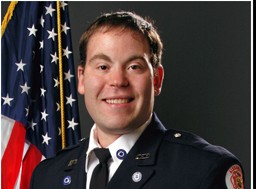 Paramedic Joshua Weissman, a seven year veteran of the city fire department, has succumbed to injuries he sustained after falling from a highway overpass in Shirlington while responding to a report of a vehicle fire Wednesday evening, officials say.

Today’s earlier story is below:

A seven year veteran paramedic of the Alexandria Fire Department remains in critical condition Thursday morning after falling from a highway overpass during an emergency call in Shirlington yesterday.

Joshua Weissman, 33, of Bristow is receiving medical attention at Washington Hospital Center for what authorities only describe as “serious, life threatening injuries.” Weissman was part of a team dispatched from Alexandria’s Seminary Road station to a report of a vehicle fire in the HOV lanes of I-395 about 6:30 Wednesday night. They were the first to arrive at the scene, officials said.

Weissman fell off the overpass almost immediately upon arriving at the scene, said Chief Robert Rodriguez. He plunged down 20 feet before landing – unconscious – in Four Mile Creek. Fellow emergency responders pulled him free of the water and transported him to the hospital, Rodriguez said. He does not know what caused Weissman’s fall. Virginia State Police are handling the investigation and were on scene this morning, Rodriguez said.

And department officials have learned Weissman often checked back with the people he treated during the course of his career in Alexandria, Rodriguez said.

“That’s the kind of nice follow up and quality care we like all of our employees to exhibit,” he said. “Josh does it on a regular basis.”

The department is offering counseling for personnel who need it and will do whatever it can to comfort and provide for Weissman’s family. The experienced paramedic is married, but without children.

“When you know somebody who is involved in a critical injury, it’s stressful and we’re offering those services to our people,” Rodriguez said. “The other thing we’re doing is offering as many services to Josh’s family members as they need … anything they need to help focus on Josh right now.”