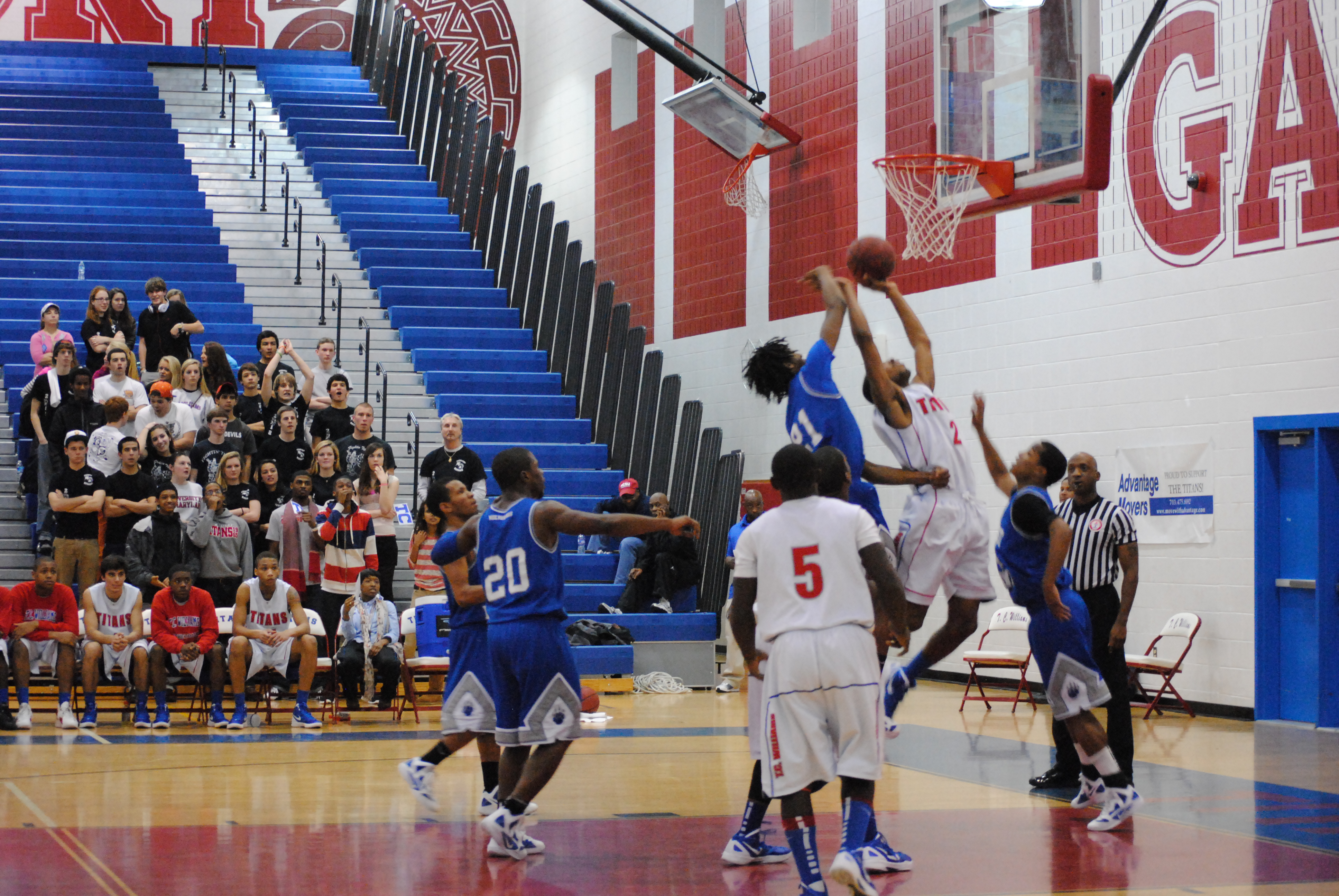 When T.C. Williams senior T.J. Huggins’ teammates need him the most, the forward delivered the strongest performance of his career, carrying the Titans to an opening win in the Patriot District tournament.

Staring down a relentless West Potomac squad with his season on the line, Huggins delivered 29 points — a lifetime high for the 6-foot-6 forward. Huggins, if pressed, admits he adapted to the role of a team leader slowly, but with the Titans already guaranteed a spot in the regional tournament he’s relishing the spotlight.

“It gives me a lot of adrenaline,” he said. “You get a lot of energy — you’re jumping higher.”

After the Wolverines surged to retake the lead in the first quarter’s final minutes, including a cinematic buzzer-beater, Huggins and company dug in their heels.

The two squads traded baskets until the three-minute mark of the second quarter. Huggins nailed a field goal to give the Titans a 16-14 advantage and despite valiant efforts, the Wolverines never clawed their way back.

T.C. left the court with a 57-42 victory and a repeat trip — no matter what happens throughout the remainder of the Patriot District tournament — to the regional competition.

Though the Titans came into the game as a middle-of-the-road team, going 9-5 in conference action, the win wasn’t an unexpected surprise, said junior Landon Moss.

“Of course we’re happy,” he said. “But we came in with the goal of winning a state championship. This is just a stepping stone.”

The Titans’ early season struggles came as a shock to players used to the celebrated program’s winning ways. After disappointing losses to conference rivals, including West Potomac, T.C. rebounded in the second half of the 2011-12 campaign. After a four game losing streak early in January, the Titans won seven of their final 10 games heading into the postseason. One of those losses included a 72-49 drubbing at the hands of nationally ranked Montrose Christian.

Coach Julian King, who shepherded the Titans to the state championship semifinal round a year ago, said the solid win against West Potomac was just what his squad needed.

“It’s a confidence booster,” he said. “Just knowing we can go out and do exactly what we talked about. We had some guys [where] this was their first time being in this kind of environment, but we had other guys step up.”

King credited Huggins and senior point guard Daquan Kerman with coming up big for the team. King notes Hggins’ transition from a role player to a team leader hasn’t been easy, especially as he gets courted college programs.

“He’s accepting it,” King said. “He’s finally growing into the role we envisioned for him. I think he can be dominate on some nights — nights like this one.”

The Titans headed to Lake Braddock Wednesday night, after the Times’ deadline, for the Patriot District semifinal game against W.T. Woodson, a team with a 2-0 regular season record against T.C.

For the Titans to enjoy continued postseason success, Tuesday’s performance must be come the norm, according to Moss.

“[What it takes] is playing the right way and T.J. is doing what he’s doing,” he said.