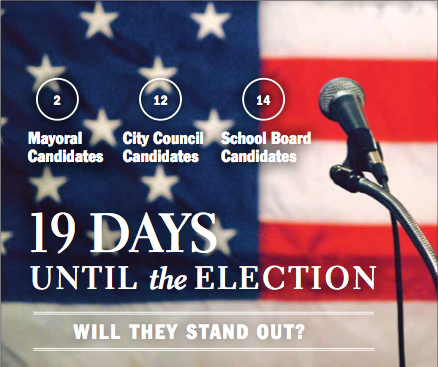 Alexandria’s mayoral, city council and school board races will share ballot space with national elections for the first time in the city’s history next month, but whether it is beneficial for local candidates remains unknown.

“You’re going to have a ballot drop-off,” said Toni-Michelle Travis, associate professor of government and politics at George Mason University.

Voters, she said, likely will focus on the statewide and national races and ignore the candidates on the reverse side of the ballot, which will list the men and women running for mayor, city council and school board. Turnout might be measured in two ways: ballots cast for the presidential election and those for city races.

“If you’re coming out for the president, then [you should] come out [and vote] for the city council,” Travis said. “But there’s definitely going to be a drop-off.”

Local debates — like those held throughout this month — are instrumental in promoting a candidate’s stance on issues, she said.

“For all the information out there, people don’t know who the candidates are,” Travis said. “Name recognition carries you a long way.”

TURNING OUT THE VOTE

Alexandrians flock to the polls in exponentially higher numbers for national contests than strictly local elections. In the November 2008 general election, for example, voter turnout reached 74 percent. Just 10 percent of registered voters turned out for a school board election three months earlier.

And in May 2009, only 15 percent of registered voters in Alexandria cast their vote for the mayoral and city council races.

“In a local election with an uncontested mayoral race, you’ll find maybe in the 20-percent [voter turnout] neighborhood, plus or minus depending on the election,” said Tom Parkins, the city’s registrar. “You then look at 75 [percent] or 80 percent for the presidential election.”

For the November 2010 general election, where the electorate cast ballots in congressional races, more than 50 percent of registered voters arrived at the polls.

“A local election just doesn’t generate that kind of attention,” Parkins said. “They just don’t find their way into the minds of voters as often.”

This year marks the first time Alexandria will hold general and local elections on the same day — November 6. The practice, though new to the city, is standard across the nation and Virginia, Parkins said.

For this year’s race, Parkins anticipates welcoming more than 80 percent of the electorate at the polls, ready to cast votes for the presidential and congressional candidates. Absentee voting already is ahead of where it was in 2008, though that figure is not necessarily indicative of Election Day turnout.

While Travis worries residents will skip over local elections, Parkins believes the shared ballot will improve voter participation in city races this year.

“The answer is counterintuitive,” he said. “They’ll be substantially more people voting in the local elections solely because they’re on the same ballot as high offices.”

Though decidedly less optimistic than Parkins, Travis hopes Alexandrians will turn their attention to hometown issues.

“They make decisions on things that really touch your lives, and it’s important to know who’s on the council and who’s the mayor,” Travis said. “That’s not the distant federal government, that’s local.”