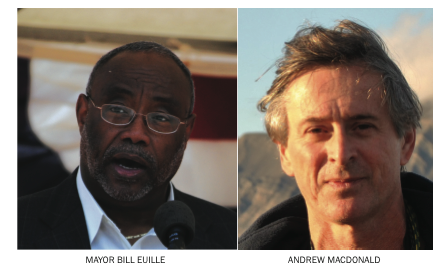 Macdonald, a former vice mayor and bitter opponent of the waterfront redevelopment plan, echoed criticisms he levied against city officials throughout the fight for the future of the Potomac shoreline. He described the planning process as “very top down” in Alexandria.

Euille, who voted in favor of the waterfront plan in January, defended the blueprint as a shared vision. Though the plan calls for hotels and a renewed emphasis on retail and commercial activity, it also sets aside more parkland and encourages construction of public amenities like a performance center.

“There’s been more than 40 years of discussion [about the waterfront’s future], it’s time to bring it to a close and make the waterfront a world-class attraction,” Euille said, arguing redevelopment would create an equally enjoyable shoreline for residents and tourists.

The two split on responsibility for Washington Headquarters Services in the city’s West End. Though traffic from the roughly 6,400 workers commuting to the complex has not proven as bad as once feared, the Pentagon annex’s location — far from the Metro and alongside a heavily congested highway — remains contentious.

Macdonald accused the then city council of failing to stop the project when it had the chance. Euille said the city’s elected leaders’ hands were tied, arguing the question was not who bears responsibility, but how to mitigate West End traffic.
On Alexandria’s increasingly dense landscape as a whole, Euille was forced to defend himself from an unfriendly audience in the George Washington Middle School auditorium. His description of City Hall as “transparent” elicited jeers from the packed crowd.

Though the pair sat side by side, their answers — and rebuttals — rarely engaged each another. While Macdonald repeatedly argued for a more transparent, community -involved planning process, Euille listed a string of successes under his tenure.

But when the mayor raised the closure of GenOn as one such example, Macdonald shot back immediately.

The two sparred over the future of Potomac Yard, which will see the vacant fields and shopping center in north Alexandria transform into a mixed-use development. Describing himself as a fan of Metro, Macdonald questioned the financial sustainability of building the station as well as the strain an influx of new residents will put on city services.
Euille argued Potomac Yard’s development would not succeed without a Metro station.

The early summer passage of the Beauregard corridor plan, which will see the West End neighborhood undergo a radical transformation in the coming years served as another divisive issue between the candidates.

“Individual [property] owners could have developed by-right — they chose to come together under a small area plan,” Euille said, touting the blueprint’s passage as the best possible outcome for the neighborhood.

“It was not well thought out,” Macdonald retorted.

But on eminent domain the two came together — as they did on increasing the city’s supply of affordable housing. Macdonald pledged to eschew eminent domain, particularly in regard to the Old Dominion Boat Club’s waterfront property, arguing the city benefited from negotiating with landowners. Euille said eminent domain was off the table when it comes to the ODBC or the waterfront, though city officials have threatened the measure in the past.

“There’s been no use of eminent domain since I’ve been sitting on city council these past 18 years,” Euille said.

The next scheduled debate for the two mayoral hopefuls as well as city council candidates is Wednesday evening at Lyles-Crouch Traditional Academy.