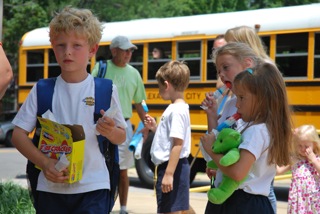 New school board chairwoman Karen Graf and vice chairman Justin Keating plan to address overcrowding and the achievement gap between minority students and their white peers this year. But taking control amid budget season presents an obstacle.

Graf and Keating — elected to the leadership positions earlier this month — realize there are a plethora of problems to address while crafting the fiscal 2014 budget. But they still hope to improve the educational experience for all students at the same time.

Though they entered the campaign season well versed in Alexandria City Public Schools’ programs and challenges, Graf said the condition of the city’s public schools surprised her.

“We’re going to have a strong relationship with the city to accommodate [the needs for facility improvement],” Graf said. “The shiny cool thing is the new building, but the alarming thing is the facility issues.”

And parents have taken note of the deteriorating conditions as well. At last week’s budget public hearing, PTA members beseeched the board to upgrade several schools, including George Mason Elementary School and George Washington Middle School.

“In general, it’s the core facilities that are a problem,” Graf said.

She pointed to Matthew Maury Elementary School as an example. Students are forbidden from entering the gymnasium bathroom because of broken tiles, further straining the rapidly growing student population.

Though she would not name them, Graf said residents could expect to see four potential projects — still in preliminary stages — in the coming years to address the issue.

“We don’t want a shock to the city when the school district says ‘All right, we need to build these buildings in 10 to 15 years,’” Graf said. “It’s not desired focus, it’s required focus.”

Though the budget takes immediate priority, Keating hopes to tackle the achievement gap as well, an issue that was at the forefront of last year’s school board election.

“I truly do think if we could do something to improve that … it would be a success,” he said.

Closing the achievement gap, Keating said, requires more than encouraging success for all students. It encompasses teacher retention as well as program development and ties together all priorities.

“A new building isn’t going to solve all problems,” Graf said. “But it gives students a good place to go.”
And for Keating and Graf, their first year leading the board is just the beginning.

“We’re going to be able to proudly look back [in three years] and say we accomplished something,” Keating said.

“My goal as chair is simply to create an environment where we can have honest dialogue,” Graf said. “If you create that environment, you get good decisions about this stuff.”