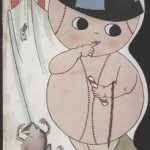 The filled area adjacent to the Jones Point Lighthouse witnessed significant use during World War I when the Virginia Shipbuilding Co. began constructing major warships at the site. But the shipyard closed soon after hostilities ceased, and the land grew quiet until the early 1930s, when it was used as a Civilian Conservation Corps camp.

Then, in 1933, an ambitious plan was unveiled to transform the former shipyard administration building and surrounding area into an unusual industrial attraction: the Children’s Toyland of America.

Long before theme parks and American Girl marketing concepts, children’s book author Valrie McMahan announced an innovative project to manufacture dolls, toys and books at the riverfront site in Alexandria, based on her popular book series, “The Baseball Kids,” seen in this 1933 illustration.

Concerned that many children had no place to pursue their sense of wonder — and that toys of the period were largely manufactured in Japan or Germany while Depression-era Americans went jobless — McMahan proposed to employ toymakers by the thousands at the Alexandria location. Within a year, new water mains, gas pipes and electricity were being laid at the site to service the necessary manufacturing processes.

McMahan also let it be known that the new factory was to become the “children’s capitol of the nation,” and to that end she planned to erect a huge dome on top of the building, similar to that of the U.S. Capitol, where children and their parents would always be welcomed. Her extensive plans for the site included additional buildings for childhood displays, park areas and landscaping, and even a boat service connection with Washington, D.C.

The wistful plan for Alexandria’s Toyland was short-lived, however, running afoul of the federal government’s plans for the area. In 1936 the U.S. Signal Corps established a communications center nearby, and in 1940, an executive order condemned the entire site as the Battery Cove Military Reservation to protect the top-secret nature of that facility.

— Out of the Attic is provided by the  Office of Historic Alexandria.