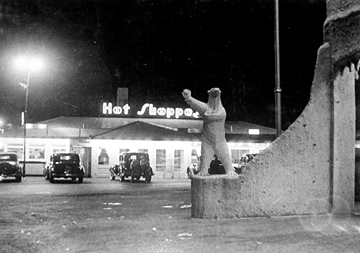 On May 20, 1927, J. Willard “Bill” Marriott opened a nine-stool A&W root beer stand along 14th Street in Washington. Although a newcomer from Utah, Marriott had passed through the District six years earlier, noticing the hordes of thirsty tourists during the sweltering summer.

Initially, his business boomed, but as autumn weather set in, the root beer counter went empty. Desperate to protect his $500 investment, Marriott quickly changed strategy and rebranded his business as The Hot Shoppe, adding hot beverages and southwest food items to the menu. The change paid off, sparking an immediate turnaround, and within several years, additional Hot Shoppes were built around the metropolitan area, bearing the motto: “A square meal at a fair price.”

In the early ’40s a Hot Shoppes restaurant was built at 905 N. Washington St. in Alexandria, an area emerging as a center for new motels and food chains catering to motorized customers. The one-story, hip roof structure, seen in this photograph taken about 1942, was built in a modified Colonial style, with the front facade facing south. A rooftop neon sign, highlighting the popular chain’s distinctive, deco-inspired name and logo, quickly alerted hungry travelers that favored menu items were just ahead. These included the tasty Orange Freeze, famous Mighty Mo burger or a cup of the best chicken noodle soup outside of a sickbed.

Although Marriott and wife Alice were well known for personally inspecting their restaurants, that job was a bit easier in Alexandria. Marriott’s brother, Russell, was the manager there for many years.

In 1967, Hot Shoppes Inc. changed its name to Marriott Corp. as its hotel operations overtook its restaurants. Ultimately, the advent of fast-food chains doomed the Hot Shoppes — the last one closed in 1999.

But happily, the Mighty Mo will be back, as the first restaurant in the chain’s resurrection will be built in the new Marriott Marquis Hotel, which is set to open in Washington next year. In next week’s column, we will discuss the polar bear in the photograph’s foreground.
Out of the Attic is provided by the  Office of Historic Alexandria.