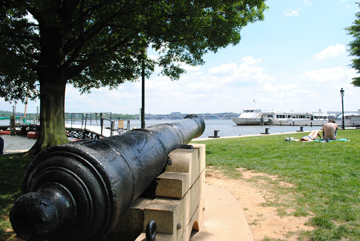 In the February 28 edition of the Alexandria Times, Jonathan Krall (“Bicycles have a place in Alexandria — even in Old Town”) shares this truism: “In more effective cities, there’s a mayor who sees that he’s more or less the chief designer of the city.” And, in many exceptionally beautiful cities — like Charleston, Chicago and Kansas City — it was a long-serving mayor who played the pivotal role in imaginatively capitalizing on their cities’ natural assets and creating an environment that fully complements and vitalizes them.

Alexandria, too, has a dedicated, long-serving mayor who has played a leading design role. But the result is not, as another Times reader recently wrote, “a world-class small city” or even a world-class small city in the making. Instead, the city’s many assets — including its history, preserved architecture, riverside location, economically and ethnically diverse population, and tradition of being a working city — are far from being creatively exploited.

Monolithic developments (e.g., Mark Center), diminution of space for job-producing commercial and light industrial ventures, a failure to significantly enlarge the stock of publicly accessible active and passive open spaces, the suburbanization of Old Town, and — very vitally — the lack of commitment to deeply engage the active interest of world-class architects and designers (homegrown or otherwise) have become the norm. Norms not measurably offset by small, yet wonderfully commendable and forward-looking initiatives like the Capital Bikeshare program Krall highlighted.

Let’s hope what’s next for Alexandria includes the renewed dedication of the mayor and our other leaders to establishing Alexandria as a city in which its residents can live, work and play in an environment that offers a markedly stronger blend of old and new forms of beauty and function. Who would wish to be designated “designer-in-chief” of a city that not only squandered its many natural design advantages, but also failed to introduce truly groundbreaking, well-integrated and long-lasting ones?