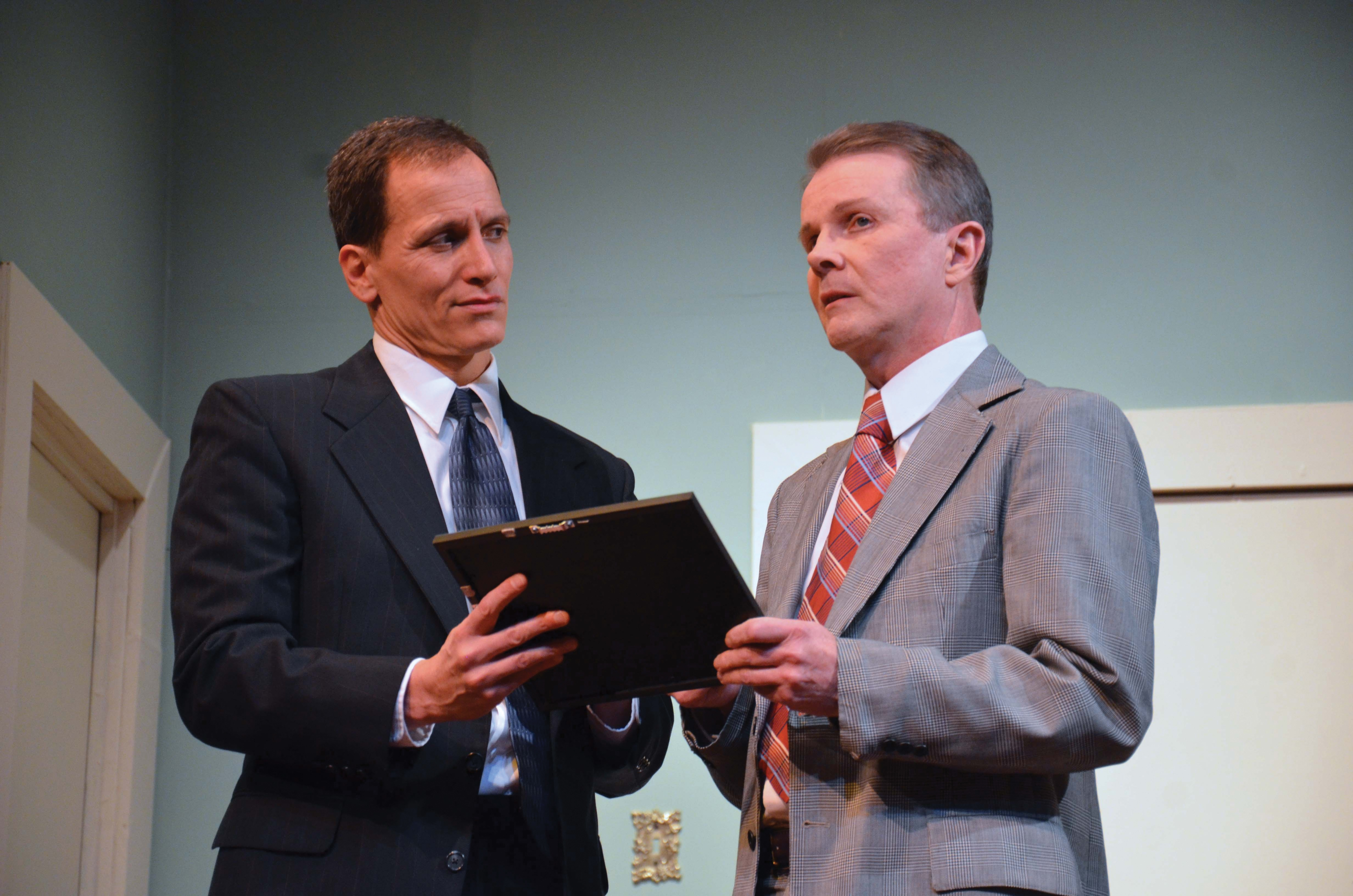 Had they updated the title to the more technologically correct “Press ‘M’ For Murder” or perhaps “Text ‘M’ For Murder,” we would have a no less delicious whodunit as the one playing at The Little Theatre of Alexandria.

That we no longer spin a dial to place a call does not alter the pulse-stopping suspense of “Dial ‘M’ For Murder,” Frederick Knott’s nifty psychological thriller. Let’s start with the corpse, or rather not; it won’t factor in for a good bit, and it won’t be the corpse you thought it might. Perhaps we should name the killer, or maybe not; it won’t be who you expected either, even though you’ll be in on the plot as soon as the action starts.

But that’s the fun part, knowing who did it when the police captain and the inspector clearly don’t have a clue.

Instead, let’s start with the Wendices: a couple of bourgeois Londoners, he a former tennis pro with failing fortunes and she an unblinkingly beautiful heiress. Tony (Richard Isaacs) has a plan and Margot (Jenni Patton) has a boyfriend — or rather an ex — but why split pretty blonde hairs? Isaacs plays Tony with just the right amount of smarmy snap while Patton, as the cool and clueless Margot, embodies British reserve.

To delve into the plot in this review would most assuredly give away the clever twists and turns and edge-of-your-seat sense of bearing witness to a murder when no one on stage — save the murderer — can guess how the bloody hell it was done, and I won’t spoil the fun. Suffice it to say, I heard the proverbial pin drop, so riveted was the audience.

Actor James Meyers, coming off his success in the fall’s “Cantorial” at Little Theatre, gives a smooth performance as the American crime writer boyfriend, Max Halliday, and John Henderson is as sure-footed as a stalking tiger in role of gumshoe Inspector Hubbard. But it is Jerry Hoffman’s stunning entrance and sly manner as the seemingly bumbling Captain Lesgate (Ah, fond memories of Columbo!) that will make you sit up a tad straighter in your chair.

A bouquet of kudos are in order for dialogue coach Jane Waldrop, a true Londoner who trained at the British Old Vic Theatre School, for coloring their accents with the staccato patter of the British upper crust.

Even if you’ve seen Alfred Hitchcock’s film version starring matinee idols Ray Milland and Grace Kelly, a mere slip of a girl at 24 when she made the film, as well as mild-mannered Robert Cummings, you will be no less impressed with this tidy package of blackmail and red herrings.

“Dial ‘M’ for Murder” runs through March 16 at The Little Theatre of Alexandria, 600 Wolfe St. For tickets and information, call the box office at 703-683-0496 or visit www.thelittletheatre.com