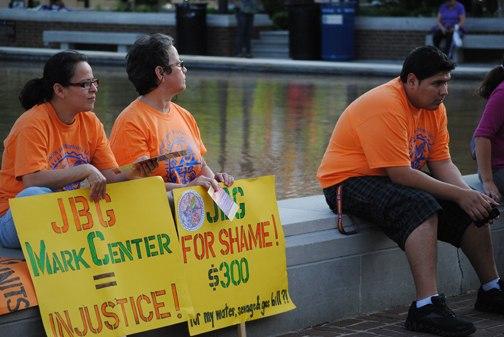 Despite calls from residents and Vice Mayor Allison Silberberg for more dedicated affordable housing units, the city council voted 6-1 to approve rezoning of the Beauregard corridor.

The vote came after hours of public testimony and discussion Saturday. Opponents, many West End residents, argued redevelopment will push out upwards of 10,000 of the city’s denizens. Proponents of the plan, several city councilors among them, worried redevelopment could occur without their say-so, putting even more affordable housing units at jeopardy.

City council approved a conceptual version of a redeveloped Beauregard corridor nearly a year ago. Saturday’s vote was to approve the zoning changes outlined in that document. The deal struck with developers gives the five major property owners in the neighborhood increased density in exchange for at least 800 units of affordable housing.

Neighborhood residents told city councilors they support the plan, but have few assurances they – and their families – will be around to enjoy the many public amenities, including a fire station and increased open space. Former city council candidate Sammie Moshenberg compared the plan to designs on another neighborhood ripe for redevelopment, arguing it put longtime tenants at a disadvantage.

“I live across the street from a major new development: Potomac Yard. Now I can fret about increased traffic and congestion, but I will also be able to take advantage of a new Metro station and the other amenities development bring,” she said. “But more importantly there is no bulldozer on its way to demolish my home. Whatever price I pay, it won’t be at the expense of my home. This is not the case for the residents of the Beauregard corridor.”

Silberberg, who mounted several attempts to increase the amount of dedicated affordable housing units above 800, cast the lone dissenting vote.

“When we talk about these numbers, those are peoples’ lives,” she said. “I think the core question is: What kind of a priority is [affordable housing]?”

Developer representatives and city councilors, including Justin Wilson, argued demanding more than the previously agreed upon 800 threatened to sink the entire deal. The neighborhood’s redevelopment has been in the works for several years and the subject of dozens of public meetings.

“We can’t – sitting up here – be pulling numbers out of the air expecting [the developers] just to give them to us,” Wilson said, arguing last minute changes would spike already increasing rent costs in the West End. “This will be a poison pill.”

City councilors did agree to shift any savings from the construction of public amenities toward affordable housing, in Beauregard or elsewhere. They also left the door open to a last-minute offer by one of the property owners to secure more affordable housing upfront, though for just 10 years.