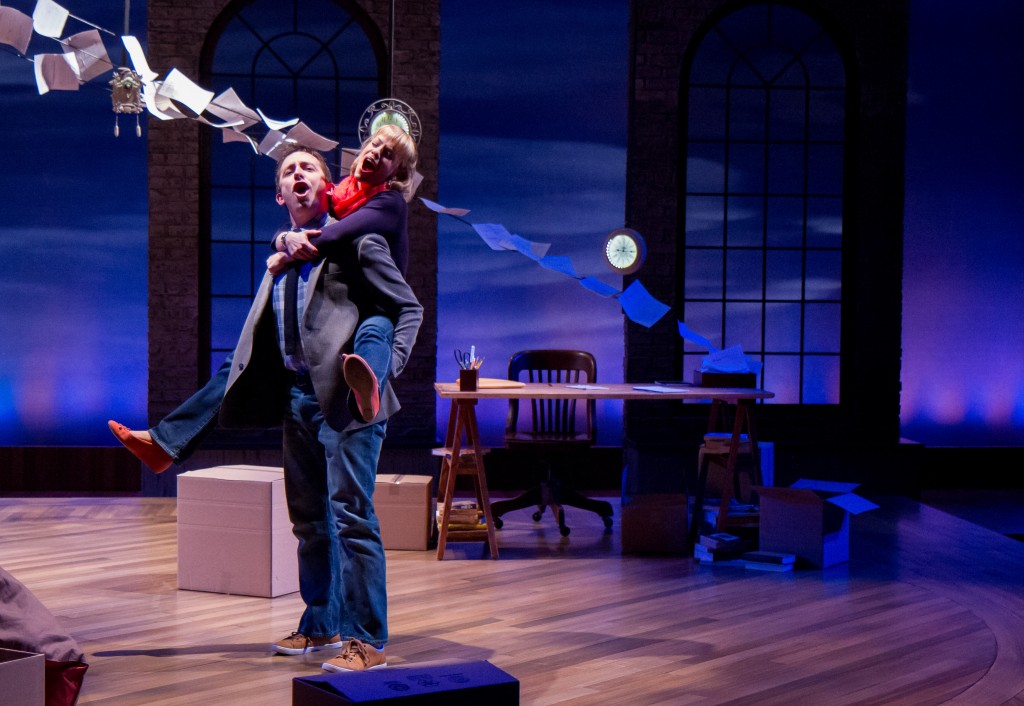 Being a theater critic is not always the best way to enjoy a show.

I’m not a typical audience member out for a spot of entertainment. Scribbling furiously in the dark, I analyze each scene, song and performer. Sometimes it’s hard to pinpoint why I am not moved, not amused, not inspired.

Take Signature Theatre’s “The Last Five Years,” for example. The acting and singing are exemplary. The set design and lighting is inspired — the dialogue lively or suitably dramatic, depending on the scene. There is nothing wrong with this show.
So why does it feel flat?

Well, it’s complicated. In this case, it’s as tangled as the plot, which jumps from early courtship to heartbreak for our hero Jamie but goes the opposite route for our heroine Cathy (though the two occasionally meet in the middle for a duet).

Known as a song cycle, the music by playwright Jason Robert Brown tells the story of an aspiring actress and a recently published writer who attempt to keep their love alive while pursuing careers in different cities. That is to say when they aren’t living in the same city, where he is enjoying success and temptations of the female variety while she spends her days going on cattle calls in hopes of landing a role.

It is certainly not flat because of actors Erin Weaver, whom we recently adored in Signature’s production of “Xanadu,” and James Gardiner, a local favorite we are excited to see in Signature’s upcoming productions of “Company” and “Miss Saigon.” They boast wonderful voices and a keen sense of comic timing.

Gardiner’s sense of physical comedy is especially noteworthy in “The Schmuel Song,” which is about a Jewish tailor who sews 41 dreams into his wife’s velvet dress. And Weaver shines in “A Summer in Ohio,” a Cole Porter-esque tune that lists all the things that are worse than waiting for Jamie’s return.

“I could get a root canal in hell,” she croons, though she follows that with the line: “The torture is just exquisite while I’m waiting for you.”
It cannot be that director Aaron Posner, the recipient of three Helen Hayes Awards and two Barrymore Awards, all of a sudden knows nothing of direction. Or that playwright Brown, who has composed four major musicals and won countless awards, doesn’t write his tail off with songs that are complete, emotionally solid and melodic.

No, it’s not the music that’s the issue here, but a human connection that goes missing. The je-ne-sais-quoi moment that reaches deep into your soul and tears out a piece that you’d be glad to offer up, if only it were needed.

It’s the part that’s not in the script, not in the songs, not in the staging. Because you really did come for that emotional ride — to believe, to buy into the moment — but sometimes the magic isn’t there.

The story is written to showcase Brown’s songs; the script is the device to string it together rather than the other way round. It’s a construct originating with Beethoven and popular today in the TV shows “Smash” and “Nashville,” centering on the music rather than the story.

If you’re ready to let it come at you as an evening of music, rather than a backward-forward plot chronicling the perils of young love played out in two cities, you’ll be better prepared to enjoy its pleasures.