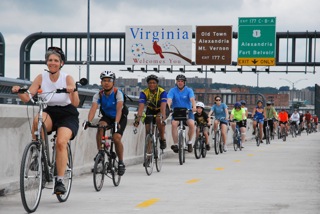 I must confess that after looking at the front page, I immediately go to the Opinion pages to see what I hope will be yet another letter taking one side or the other in the battle over bikes in the Port City.

As a bike rider for nearly 60 years, I believe that one can only truly understand the context of this ongoing debate and deal with it correctly if your readers see the distinction between bike riders and cyclists.

Since the day my dad hoisted me up on my new Schwinn for my 5th birthday nearly 60 years ago, I have been a devoted bike rider. I will never forget the freedom that bike gave to me. It was the freedom to get away, explore seemingly faraway places (more than six blocks from home!), get to school, run errands, and all sorts of things with a sense of responsibility and fun at the same time.

Rules? There were no rules, other than my dad’s warning to beware of cars. Stop signs were reasons to look both ways. Sidewalks and alleys were shortcuts. With our wide tires, we could go anywhere off pavement — and we did. The long summers seemed all too short as we rode our bikes to the park to play ball, the miniature golf course in the evening and the ice cream shop afterward.

We annoyed car drivers — as they were called then, not motorists — all the time. How we did peacefully coexist? Back in those days there was something so absent from today’s world: civility. Perhaps because we didn’t have written rules and laws, we relied on a combination of common sense and regard for others. I truly fear that, as civility becomes endangered, common sense and regard for others will disappear along with it.

Most of my friends exchanged the freedom they cherished for a decade on their bikes for cars when they turned 16 and never looked back. I didn’t. I have ridden my bikes throughout the world, including places like Italy, Israel, China, Egypt and Alexandria.

When I moved here four years ago, I became increasingly intolerant of a species of human being referred to as a “cyclist.” They are not always easy to recognize if you are a devoted motorist.

But us bike riders, we spot them in a heartbeat. They ride the streets and trails as if they own them. They treat the Mount Vernon Trail and Union Street as if they were designed for time trials, paying no heed to the 15-mph speed limit. They often pedal road bikes more suited for the Giro d’Italia than our neighborhood streets.

None of the Times’ pro-cyclist opinion writers — including thoughtful columnist Jonathan Krall — are willing to acknowledge that cyclists should be cycling in the Blue Ridge or Beach Drive on a weekend rather than on our trails and streets.

They are truly a menace to cars, pedestrians and bike riders.

Unhappy motorists out there: When you spot a bike rider, think back on your childhood when you enjoyed the freedom of a bike. Then smile, first to yourself and then to them. Bike riders range from age 5 to 95. Cherish them. They are enjoying their slice of freedom. They may be annoying, but they cannot hurt you.

You, on the other hand, can hurt them.

When you spot a cyclist breaking the rules, however, don’t let it pass. Let them know in no uncertain terms. It’s therapeutic, and it just might sink in if others do it enough. If possible, take a photo and send it to the police.

I would love to see the police assemble a video of cyclist accidents. They are gruesome. Then require each cyclist who violates the rules of the road to watch this video. It would be nice if groups like Krall’s would help with such an effort.

The D.C. area has hundreds of miles of bike trails, all accessible from our front doors. I challenge all the readers, of any age, to grab a Capital Bikeshare cycle and pedal south on the Mount Vernon Trail. For youngsters, it will open up a new world. For us seniors, it will reopen the fun of our youth.