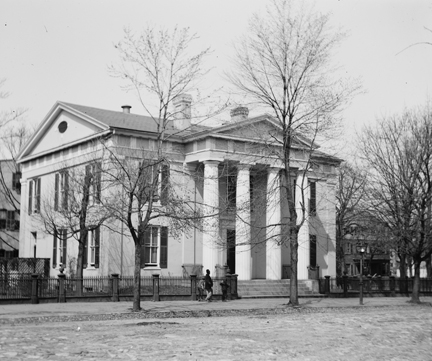 The handsome new wood shingle roof installed at The Lyceum, the city’s history museum, over the past several weeks brings to mind the unusual history of one of Alexandria’s finest Greek Revival-style buildings.

The Lyceum was constructed in 1839 after the lot at 201 S. Washington St. was purchased by local schoolmaster Benjamin Hallowell and a group of associates. They had formed The Alexandria Lyceum several years earlier to develop a center of classical knowledge and scientific learning for the residents of the prospering city.

Partnering with The Alexandria Library — then a private, subscription-based organization — the group moved book collections as well as natural history and scientific exhibits into to the new building to enhance public learning opportunities. For more than two decades, The Lyceum, named after the Greek gymnasium near Athens where Aristotle taught, was used for public lectures, concerts and enlightened entertainment, featuring such personalities as Tom Thumb and Edgar Allan Poe.

During the Civil War, Union forces seized the large building for use as a military hospital, and the collections of books and exhibits were removed. When the war was over, the building was acquired by John Daingerfield and converted into a home for his daughter, Mary.

Later in the early 20th century, it was sold to physician Hugh McGuire and his wife, socially prominent Alexandrians, as seen in this photograph taken about 1918. Hugh McGuire was named after his grandfather, Hugh Holmes McGuire, a prominent eye surgeon from Winchester, and his father was the noted physician, educator and orator Hunter Holmes McGuire.

Hunter McGuire, as a Confederate soldier and doctor, vainly tried to save the life of Gen. “Stonewall” Jackson, mortally wounded by friendly fire at Chancellorsville. After the war, Hunter McGuire returned to his Richmond home, where he eventually became president of the American Medical Association and an early leader in the eugenics movement.

By the 1960s, The Lyceum housed an office building, and its architectural features became seriously neglected. Threatened with demolition, it was saved and converted into the nation’s first bicentennial center in 1974.

The City of Alexandria acquired the building for use as a general history museum, which opened in 1985.
– Out of the Attic is provided by the  Office of Historic Alexandria.