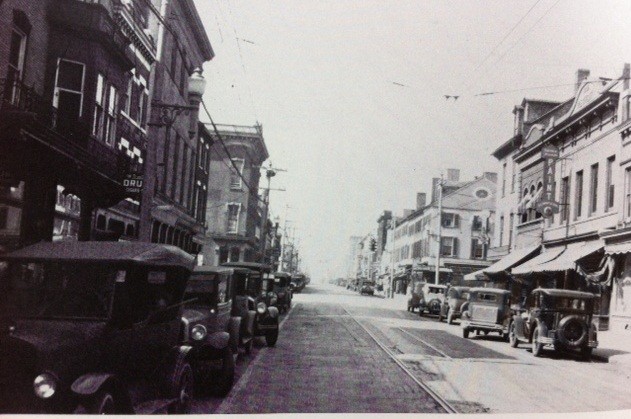 This photograph of the westerly view of the 600 block of King St. — taken around 1925 — shows a variety of commercial buildings important to city residents back then.

Dr. Warren Grubbs was the proprietor of the Rexall Drug Store at 616 King St., where Halloween traditions were maintained for many decades. Each year, families would gather at the store for an informal parade of costumed children. The popular spectacle was just one part of the holiday festivities downtown.

A three-story structure known as Washington Hall, which was built in 1854, sat next door. The Episcopal Theological Seminary’s original building, which began hosting classes in 1823, was located just a short distance away.

The John Gordon House, built in the late 18th century, can be seen on the north side of the street. It still stands today.

And the site of Timbermann’s Drug Store is visible just across King Street’s intersection with Washington Street. It was demolished in the 1950s, after the pharmacy moved one building to the north.

Shoppers of the period could find R.E. Knight and Sons, a hardware store, just to the east of the Gordon House. A vertical “PAINT” sign marked the store, which operated in that spot for more than 70 years. This large emporium sold products far beyond the range of typical hardware stores of the time.

Alexandria’s children likely had a love-hate relationship with the shop. Most elementary school students bought school supplies and books when summer ended at R.E. Knight and Sons, but the second-floor toy department was a joyous wonderland of childhood delights.

Interestingly, the photo also captures easily overlooked details of Alexandria’s downtown infrastructure in the early 20th century. The center of King Street includes the shiny tracks of the trolley that passed through the Port City en route to Mount Vernon about nine miles south. Though barely visible, the electrical cables necessary to operate the trolley can be seen high above the tracks.

King Street also is crisscrossed by above-grade wiring, supported by telephone poles that serviced the many businesses along the crowded thoroughfare. Many of these poles also hosted bracketed, ornamental streetlamps high above to illuminate the downtown area as brightly as possible.
– Out of the Attic is provided by the  Office of Historic Alexandria.