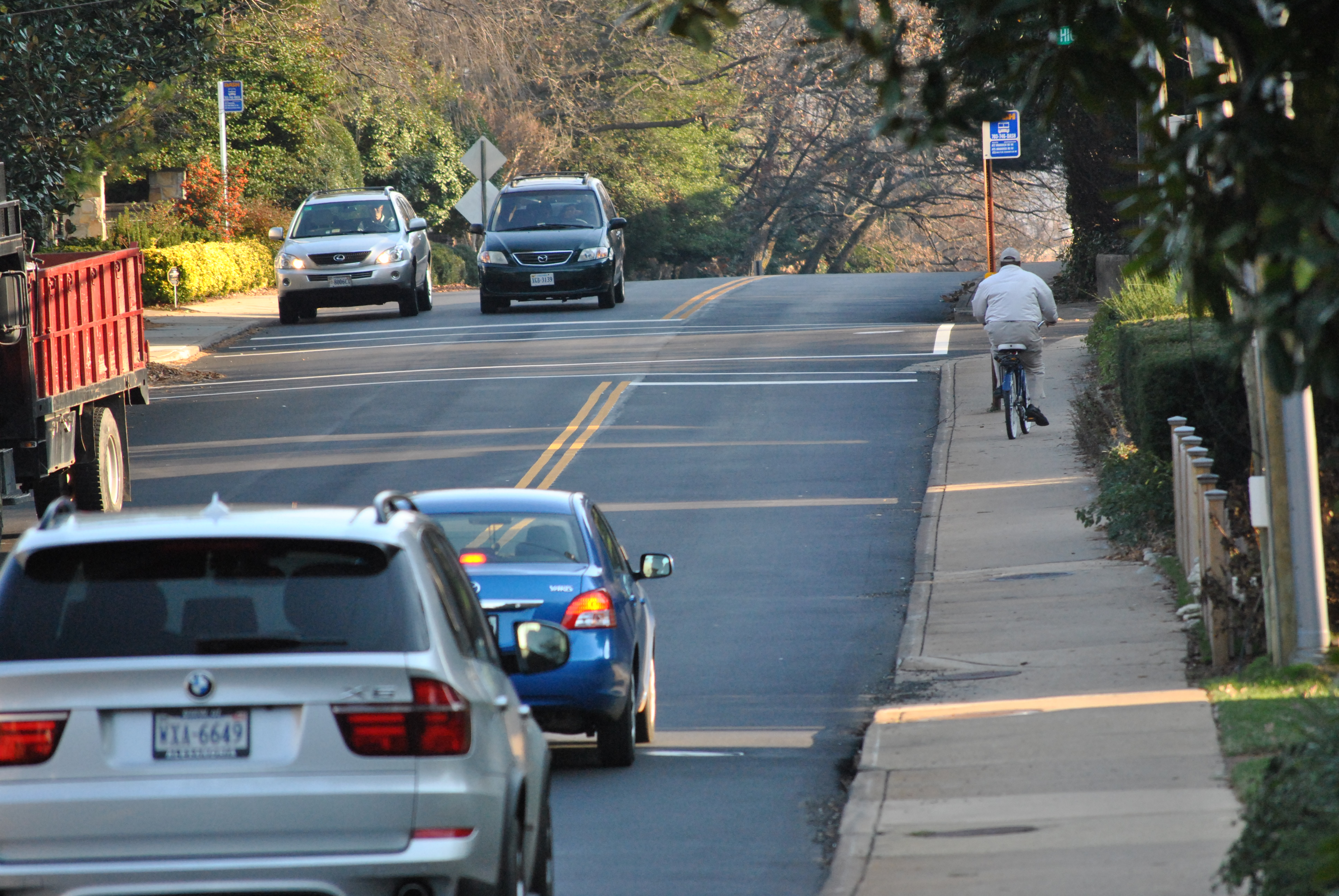 City Hall’s suddenly controversial plan for adding bike lanes to a stretch of King Street just outside of Old Town threatens to reignite the contentious debate over cyclists and their place in Alexandria.

The roadwork would see bike lanes and sharrows added on the busy thoroughfare between the intersections of Russell Road and Janneys Lane. To make room for the cyclists — and improvements aimed at enhancing pedestrian safety — the proposal calls for narrowing traffic lanes and eliminating 27 on-street parking spots.

Neighbors, though, largely panned the project. And as word of the controversy spreads, the debate grows more heated.

When the topic popped up on the Beverley Hills listserv, a popular Internet-based neighborhood forum, it didn’t take long for the conversation to focus on where and when cyclists belong on city sidewalks and roads — and how they ought to behave.

“When I am walking along minding my own business, I find it rather loathsome when a biker comes from behind me yelling, ‘On your left!’ … as if I should get out of their way,” wrote one member. “I also believe they feel more civilized than the rest of us human beings on four wheels and two legs.”

“It is not to tell you to move out of their way, but to let you know a faster-moving object is approaching you that you may not see or hear from behind. It is better than not giving a heads-up and startling folks, who might then actually move into the bike’s path unknowingly,” replied another. “I suppose that is rather civilized of bikers to try and properly share trails and sidewalks. The nerve.”

For those who follow the on-again, off-again debate, which last popped up in the spring and early summer when city council overhauled Alexandria’s bicycle laws, the war of words is nothing new. Kevin Posey, a member of the city’s traffic and parking board, partly chalks it up to an understandable fear of change.

“Any time you have change, you have a pushback, and this change is here to stay,” he said. “You talk about putting [bike lanes] in, and people freak out. But once you put them in, people get used to them and say it’s not so bad after all. … I’ve been seeing this all over the country — all over the U.S. We’re in a transition period now. It’s finally reached the level where people are noticing it and reacting to it.”

But there is a deeper divide between those who eschew motor vehicles and lifelong drivers who can’t imagine traveling any other way. More and more people are falling into the former category, Posey said, noting the migration of people back into the cities, where they can get around without cars.

“In Alexandria, we’ve been a little slow about addressing that change,” Posey said. “There is still a tendency to move the cars through. No, we need to start addressing these folks who don’t want to drive, who want to walk or bike.”

There is other evidence of this growing rift — and the interest in the debate nationally. The strongest, perhaps, was an opinion piece by King Street resident F.H. Buckley published last month in The Wall Street Journal, putting a bit of the national spotlight on the latest round of the debate in Alexandria.

Buckley touches upon many of the issues raised by opponents of the roadwork: the few cyclists who use that stretch of road, the loss of parking spaces and the heavy traffic levels. But he also takes umbrage at the tactics — and attitudes — of cyclists.

“The preening activists who favor these lanes are in my town, and they will soon come to a neighborhood near you if they’re not there already,” Buckley warns. “… Our little squabble illustrates the tactics you can expect to see when the bike wars reach you. Cyclist commuters may number no more than 2 percent of the adult American population, according to a 2002 report by The Pedestrian and Bicycle Information Center, but they are the ones who go to city council meetings. They’ll push for the kind of “complete streets” policy that our city adopted, one that gives priority to pedestrians and cyclists over cars.

“In the abstract, that will sound innocuous, but when the time for implementation arrives, you’ll find yourself losing your street parking, street by street, as roads are repaved. And parking spaces are just the beginning.”

While Buckley decries the approach cyclists have taken, neighbors like Louise Welch just worry that adding bike lanes will pose a safety hazard — for everyone on that road. Narrowing the congested street will make it harder for large vehicles, she said, and more dangerous for cyclists.

“It is just overall dangerous,” she said. “It’s a main road, it’s a main city artery, it’s a state road and they’re not really looking at what needs to be done to make it safe. They’re just saying, ‘Let’s put in bike lanes and see if it works.’”

While bike-lane opponents are portrayed as only caring about their free on-street parking, Welch said the spots serve as a buffer when she pulls out of her driveway. And more importantly, she noted, where do people expect contractors and delivery vans to park?

The traffic and parking board took up the proposal last week — Posey was unable to attend — recommending the city move ahead with pedestrian-safety improvements. But board members also said officials should think twice about bike lanes and other traffic-calming elements.

But that doesn’t mean bike lanes are dead. While the board makes recommendations, the decision ultimately rests with Rich Baier, director of transportation and environmental services.

Welch and other opponents are staying on top of the issue. They want to be involved in the decision-making process in the days and weeks ahead.

This marks Welch’s first foray into what Buckley described as the “bike wars,” and she regrets the issue’s divisiveness. But that doesn’t mean she plans on backing down.

“It’s a bad situation, because it’s set up the bikers against the residents, and I don’t think any of us want to be angry at each other. But I think we need to stand up in the neighborhood to what we feel is safe and important to our lives,” she said.