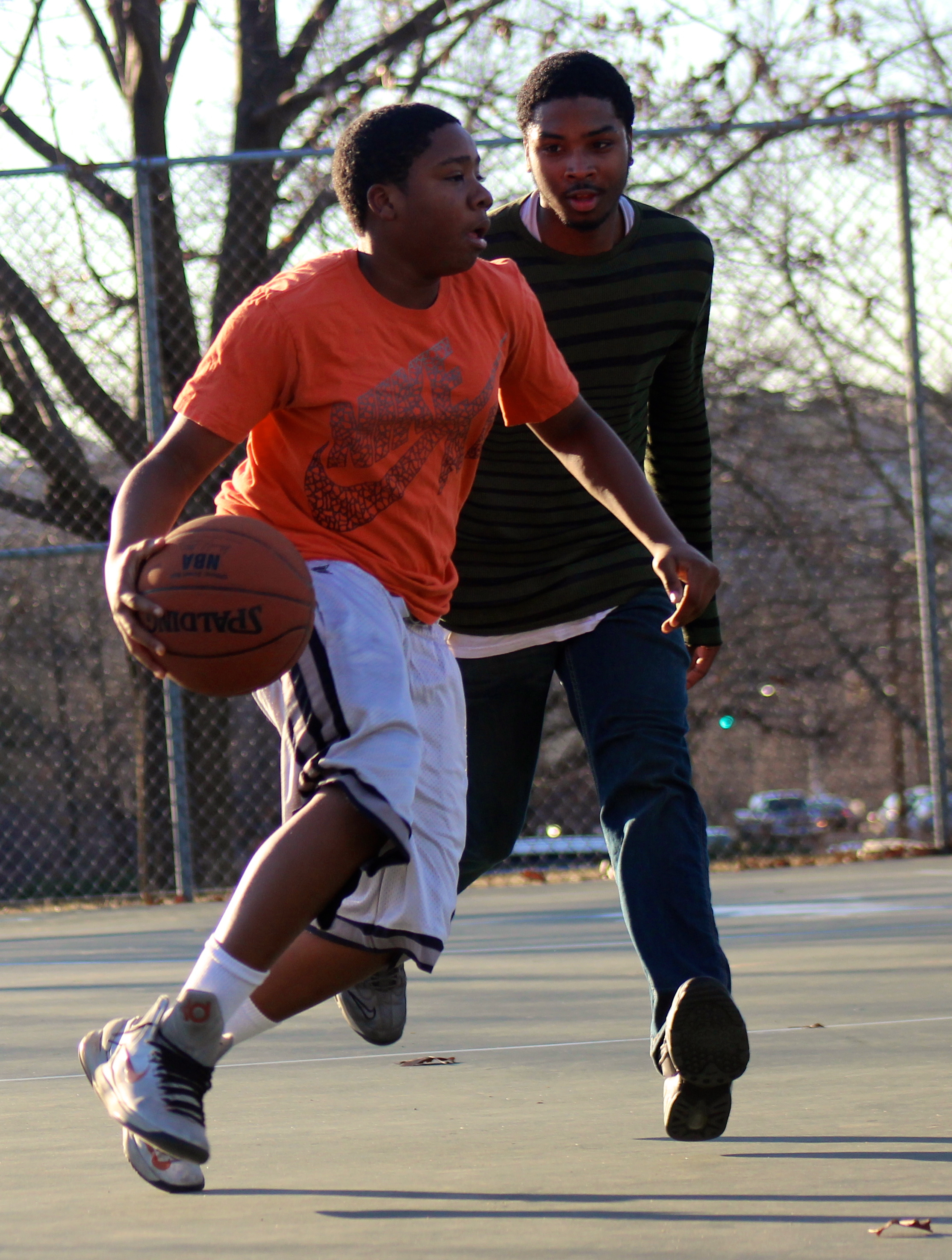 The forecast warned of wintery weather on the way earlier this week, but the basketball players at Ewald Park in the city’s West End didn’t care.

They wanted to get in as many games as they could before snow made play impossible. Despite the cold, they prefer the outdoor game — street ball.

Unlike at some recreation centers, they don’t need identification to play. Residency doesn’t matter. There are no coaches, registration fees or referees. And there are no parents barking plays from the bleachers.

Out here, there’s just one thing: the game.

All of that and more is why this neighborhood court along a busy stretch of Duke Street is filled with players even in the dead of winter. The rules are simple.

“It’s four-on-four, we shoot for captains and the winners stay on,” said Jonte Walton, a 20-year-old who’s played at Ewald Park for the better part of a decade.

The best-known place for street ball in the D.C. area is the Barry Farms neighborhood in southeast Washington, which has an organized summer league and often attracts NBA and college talent.

But street ball takes place on courts in neighborhoods across the United States. The Ewald Park court, where the city installed new lights last year, can hold its own against most places, players say.

“We get guys from colleges coming here, players come from Maryland all the time,” said Tavon Singletary, 21, who along with Walton graduated from T.C. Williams in 2011. “Barry Farms is big, but we get some recognition out here.”

There’s a good bit of trash talk. Not all of it is fit for print, but it’s in good humor. Aside from a desire to play, a thick skin helps: If someone shoots an air ball, be prepared to hear about it — a lot.

In summer, the crowds are bigger. Then, there’s a rhythm to the court. Younger players show up early hoping to get into a few games. Later, older players come and take over. The younger players retreat to the sidelines and watch, looking for a chance to get back in the game.

But as evening came late on a recent afternoon, perhaps because of the chilly air, there were about a dozen players running full court — few enough that many ages and abilities played together.

There was Calvin Barrett, a 32-year-old UPS worker studying graphic design, who moved to Alexandria about a year ago because there weren’t enough jobs in Atlanta. Looking to get some exercise, he joined LA Fitness, but it was a little too expensive.

One day about a year ago, he was leaving the Harris Teeter across the street and noticed the basketball court. Not knowing anyone, he brought his ball and started shooting around.

Soon, Barrett got into a few games. Now, he’s a fixture.

“I’ve been coming ever since,” Barrett said between pickup games.

On Monday, one of the fastest players, who appeared to be about 15 or 16 years old, wore a Titans winter cap. Lean and quick, he dazzled with a crossover every bit as good as any you’d see in a varsity game at T.C.

At one point, he dribbled into the lane in traffic and spun around, tossing the ball behind his back, barely missing off the rim. It was the sort of play that might prompt a coach to yell about passing the ball, but out at Ewald Park, it earned oohs and ahhs.

“You can play any way you want to play,” said another player, Jerome Harris, a 16-year-old who battled under the boards with a guy twice his age in Barrett.

Outside jumpers are tough to hit outdoors, especially with a winter crosswind blowing through. But one of the youngest players on the court, Wayne Perry, was having a good day.

As for why he plays at the West End park, there’s nothing much to explain.

“It’s a lot of fun,” he said after a game in which he nailed a few impressive jump shots.

Perry, who had a quick crossover of his own, went on to recount in a quick postgame interview how he’d just nailed a pair of 3-pointers. Then, Harris interrupted. Some spirited but friendly discussion ensued between the pair about who had a better game.

The trash talk soon turned into laughter. And soon it would be time to pick sides again.