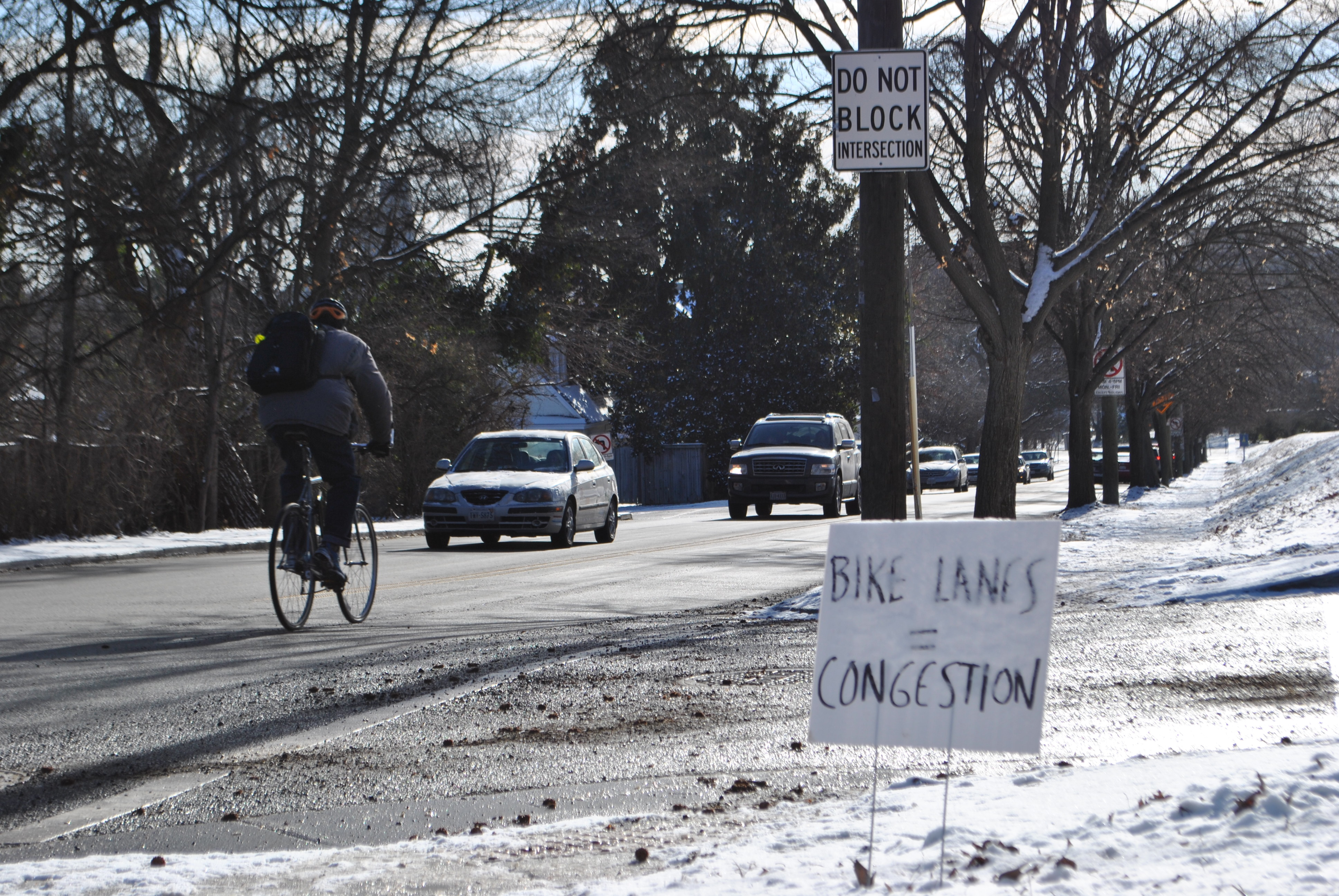 The sudden appearance of outsiders lobbying to install bike lanes on a dangerous section of King Street is unwarranted interference. Together with the local bike lobby’s twisted reporting of the recent traffic and parking board meeting, they create undue animosity.

But this is what lobbyists do: Stand in the way of change that does not wholly benefit them alone.

In the past year, Alexandrians have been accused of fearing change and being rude, criminal and uncaring, while the bike lobby and others conduct a — perhaps unintended, but nonetheless — disruptive campaign targeted at people who are simply trying to get where they’re going, either on foot or in a vehicle. It is like an invasive species pushing into spaces successfully occupied by natives. In Alexandria, we are trying to create a new space that accommodates everyone.

Under cover of the mostly untried complete-streets policy, rhetoric from lobbyists was used to obscure the real difficulty of mixing multiple transit modes (cars, trucks, buses, pedestrians, bicycles) while ensuring safe passage for all.

Despite attempts around the world, mixing modes can produce new accident patterns and many near misses.

This happens most often in places like this small section of King Street. At that spot, a high incidence of traffic accidents, a narrow roadway, limited sidewalks and steep hill all combine.

The city traffic and parking board was not disrespectful of the speakers at the meeting. It did listen carefully about how to reconfigure King Street. And it rightfully requested that speakers who did not do so (after three polite appeals) identify where they live. Some seemed to forget.

The amount of lobbyists from outside the city was surprising, as the review was not just about bikes, but also about how to change this small and very dangerous section of King Street to accommodate everyone. Safely executing this for multiple modes of transportation may be impossible without greatly increasing all-around risk.

City staff did a fine job crafting a compromise for parking. However, the design remains a solution crafted by planners, not traffic and safety engineers. It still demonstrates great potential for near misses and collisions.

This is a complex engineering problem, and the traffic and parking board was wise to delay a decision until an engineering and safety assessment is available and expert alternatives presented.

Finally, it was stunning to hear the bike lobby characterize cyclists as “traffic-calming devices” or “buffers.” The ethics of this rhetoric, which advocates deliberately putting cyclists in the way of harm, is immoral and irresponsible. As an early speaker, who was a safety expert, testified: The goal of situations like the King Street renovation is to reduce — not increase — risk to all users.

So, let’s try to put commonsense and safety, not political correctness, at the forefront of building better shared streets for everyone. Outside lobbyists — like the Coalition for Smarter Growth, complete-streets advocates and bike lobbying organizations — must remain secondary. The reality is that we all want our streets to be well engineered and safe. Rubber, not human beings, should be meeting the road when we’re through.