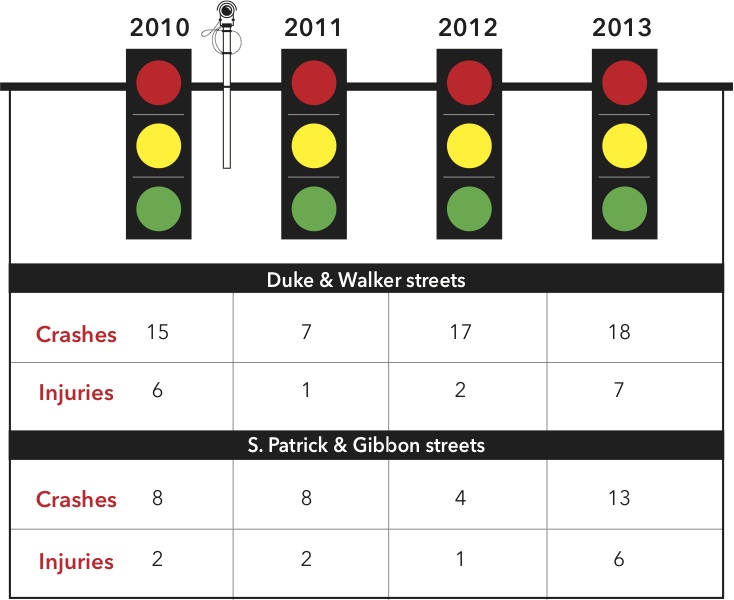 Additional red-light cameras could be going up at a pair of busy city intersections, but the presence of surveillance equipment thus far has done little to reduce automobile accidents at the two sites.

City and police officials cited crash reduction as a key reason for the measure when the first cameras went live in 2011 at the intersections of Duke and Walker streets as well as South Patrick and Gibbon streets. They again made the case for safety earlier this year, when pushing for more red-light cameras at those intersections emerged as part of City Manager Rashad Young’s draft budget.

The proposed cameras would cover lanes not yet under surveillance.

But statistics obtained by the Times through a Freedom of Information Act request indicate the cameras, at best, only temporarily improved safety at those two intersections.

According to the police department’s statistics, crashes at Duke and Walker streets fell from 15 to seven in the camera’s first year of operation. But authorities responded to 17 accidents in 2012 and then 18 in 2013.

A similar trend occurred at the intersection of South Patrick and Gibbon streets. Eight crashes occurred at the site in both 2010 and 2011 and that number fell to four in 2012. But — like at Duke and Walker — crashes spiked in 2013, up to 13 accidents.

Deputy Police Chief Eddie Reyes said the cameras are helping to reduce crashes, even if the statistics don’t bear that out.

“Unfortunately, what doesn’t help us … is that, as you know, this is a very transient region,” Reyes said. “Those of us who were born and raised here, we know [the lights] and risk spilling our drink to come to a complete stop. But because of the transient population, new people are just constantly coming through our city.”
He added that police know the cameras are working because they rarely issue tickets to multiple offenders, meaning drivers are learning not to press their luck. And these intersections are configured in a way that makes it difficult — if not impossible — for officers to ticket violators.

“We have them at traditional intersections where you can park a police car or a motorcycle,” Reyes said. “If you survey these intersections, it’s almost impossible to do human enforcement just because of the complexity of the intersection.”

John Bowman, a spokesman for the Wisconsin-based National Motorists Association, a driver advocacy group, said a spike in accidents are common following the installation of red-light cameras.

“You do typically see an initial decrease as people get a feel for how the cameras operate,” he said. “They don’t know what to expect so they’ll be pretty cautious. What tends to happen, though, is as time goes on, people get caught in a dilemma zone approaching the intersection … in that they don’t have enough distance to stop safely at the intersection but don’t have enough time to get through the intersection before the light turns red. So they panic, slam on the brakes and that can create a rear-end collision.”

Bowman said there are better ways to improve traffic safety at intersections that don’t involve cameras or stationing an officer at a corner to hand out tickets.

“Increasing yellow-light times is a very effective way to cut down on accidents and citations,” he said. “And there are other fixes, like making sure there is proper signage, making sure the signals are visible and synced up correctly. Those basic things can go a long way to improving intersection safety and are much more effective than cameras.”