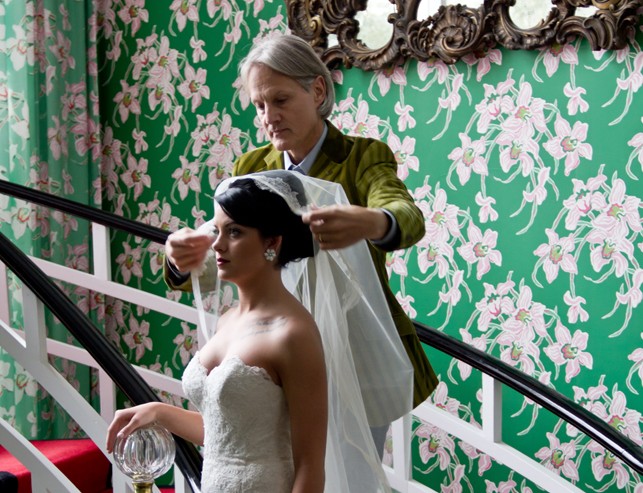 Emerging from St. Paul’s Episcopal Church on a recent Sunday, celebrity bridal consultant Monte Durham quickly was surrounded by a group of teenage girls hoping for a photograph.

“Sometimes I do feel like a puppy in a window. Everyone’s petted me,” Durham said with a laugh. In the four years since he began starring in TLC’s “Say Yes to the Dress: Atlanta,” Durham, who splits his time between Atlanta and Alexandria, has gotten used to being recognized.

“I’m constantly getting mobbed, and I mean everywhere. On planes, in airports, at the Dairy Queen in West Virginia,” Durham said. “I’ve gotten good at selfies, so I can keep on moving.”

“I was raised to be polite, kind and generous,” he emphasized. “One thing I would never want is my grandparents thinking, ‘You know better than that.’ Anyone who acknowledges me, I [also acknowledge] them.”

The reality TV star initially struggled with how to react to the outward affection people show upon recognizing him.

“People come up and tell me they love me,” he said. “At first, I said, ‘Whoa, what is this?’ Now I have the ability to accept that for what it is.”
Many fans and well-wishers erroneously imagine he lives a life of grand opulence.

“I still clean my own house,” Durham said amid laughter. “People assume you have maids, drivers, gardeners. I don’t know if that bursts their bubble” to learn he doesn’t.

“Growing up in West Virginia, I was bullied and picked on. Now, when I walk down Fifth Avenue [in New York City], people call out my name,” he said. “Truly, I’m blessed.”

Durham’s private life was also officially blessed last October when he and his partner were married in Washington. A second blessing was held at St. Paul’s, officiated by The Rev. Oran Warder and Vicar Judith Proctor. Durham said they deliberately didn’t publicize the ceremony, which was followed by a small luncheon at the Morrison House.

Lori Allen and her husband came up from Atlanta for the wedding. Allen, owner of Bridals by Lori, the store that serves as the setting for “Say Yes to the Dress: Atlanta,” is not just a co-star but also an old friend.

Fame has afforded Durham the opportunity to get involved in charitable causes, and better assist organizations with which he has long-standing ties. One such cause is Say Yes to the Prom, a charity supported by Discovery Communications and TLC that helps girls with good academic standing — but limited means — get the opportunity to dress up like models and attend their prom.

More than 1,200 dresses have been donated. Girls get their hair and nails done and pick out a dress.

“One of the great things about this,” said Durham, “is you have these insecure girls come in. They’re ushered in and they don’t know what’s going to happen. Then they get dolled up, walk the red carpet and I present them with a rose.”

One of Durham’s biggest challenges is making enough time for everything he wants to do.

“Sometimes I don’t know whether to look at my calendar or not,” he said. “I think, ‘Why’d I say yes to that.’”

For the past four years, Durham has spent two weeks filming in Atlanta before returning home for five days. Then he heads south again.

The new season of “Say Yes to the Dress: Atlanta,” which airs the first week of June, will contain a few new twists. Durham is “stepping out of the box a little bit more” in this new season.

“In one episode, I am a Frenchman — I love costumes,” he said.

A few episodes in the fall will feature celebrity brides-to-be.

Durham is emphatic on one point: He and Allen do not choose the brides who appear on the show. The most he can do is tell them how to apply.

Applicants sign up on the websites of TLC and Bridals by Lori. A few are then chosen to interview with a casting agent.