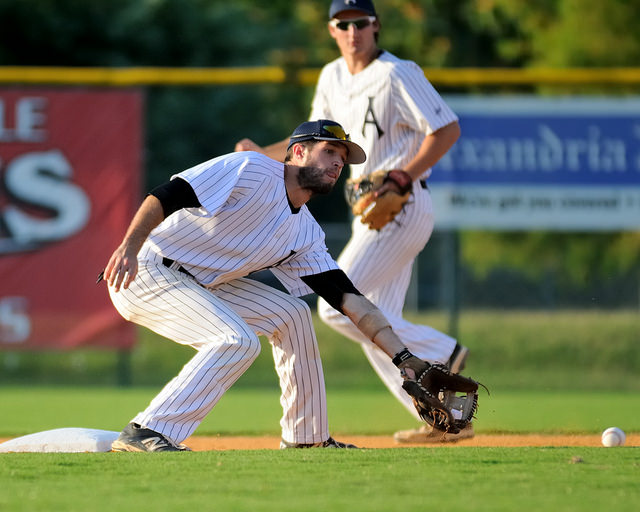 The Alexandria Aces have made their third trip to the playoffs in as many years, winning a first round game against Gaithersburg only to stumble late against league powerhouse Bethesda Tuesday night.

The Aces’ 5-3 win against the Giants on Monday meant they qualified for the four-team double elimination playoff round for the second year in a row. That meant Alexandria still had a shot at the Cal Ripken Collegiate League championship despite the 5-3 loss to Bethesda.

Still, the road to the championship game would have been a lot easier with a win against the Big Train. Victory seemed within reach until Bethesda scored four runs in the seventh and eighth innings.

The Aces held a 3-1 lead into the seventh inning, with two of those runs coming in the first after a lead-off double by shortstop Josh Swirchak. He then scored on a single by catcher Danny Bermudez. In the next at-bat, Jake Kuzbel knocked home Ash Fulmer, who had gotten on base with a walk.

But three late Aces errors wiped out the early runs and overshadowed a strong start by Sean Thompson, a right-hander from Texas Tech who struck out five batters and gave up one earned run in 6 2/3 innings.

His change-up fooled Big Train batters all night, including a few who expressed their frustration to the home plate umpire.

The loss also overshadowed another perfect night at the plate for Swirchak, who wasn’t even sure he’d find a spot in the league early in the season. In the playoffs, however, he went 4 for 4 against Gaithersburg and 3 for 3 against Bethesda.

Swirchak, who plays for Wilmington University and grew up in Mannassas, said he called around but couldn’t find a spot on a college summer league team anywhere earlier in the season.

“[DeSilva] said, ‘Let’s get this guy in and give him a shot,’” he recalled. Within weeks, Swirchak found himself going from role player to one of the top hitters in the league. Named to the all-star team, he tied a league record in triples and finished the season second overall in RBI (29) and batting average (.352).

“I’m just happy the Aces gave me the opportunity,” he said after the Bethesda game.

Among other regular season standouts on the mound this year, the Aces’ left-hander Andrew Witczak led the league in earned run average (0.84), and Tyler Tobin, who got the victory against Gaithersburg on Monday, ranked fourth overall (1.40) in the same category.

After the Bethesda game, DeSilva said the season wasn’t over and refused to look beyond their next game against Rockville on Wednesday night, which was after the Times’ deadline. A win against the Express and Alexandria’s playoff run would continue, while a loss would bring their 2014 season to a close.

Overall, he said the team would have liked to have gotten a few more regular season wins so they didn’t have to use Tobin in the play-in game against Gaithersburg.

“I think we showed we’re one of the top programs in the league,” he said.

Olivia Anderson - May 19, 2022
By Denise Dunbar | [email protected]com When Cody Mello-Klein moved to Alexandria in December 2018 to work as a reporter at the Alexandria Times, the Boston-area native...