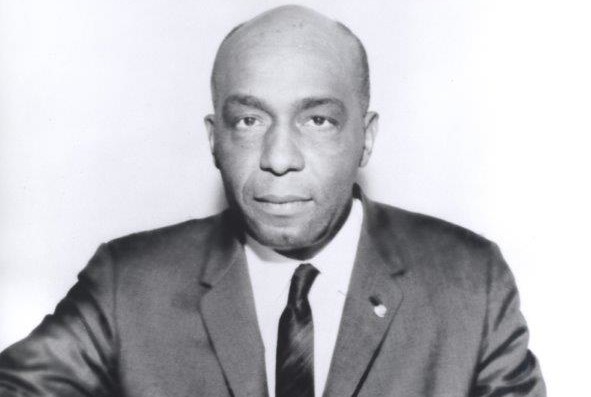 In 1939, quietly reading a book in a city public library meant risking arrest, depending on the color of your skin. One young, black Alexandria attorney pressed it to his advantage.

Seventy-five years ago today, Samuel Wilbert Tucker sent five well-dressed black men into the Alexandria library — now the Kate Waller Barrett branch — to ask for a borrowers’ card. One by one, the first four entered and made the request, only to be refused by a baffled librarian.

The library was whites-only, after all.

Rebuked, the men quietly selected books from the nearby stacks and sat down to read. The fifth, a man named William “Buddy” Evans, made immediately for a book and found a seat, joining his compatriots.

There they sat until the police arrived. Reading in the public library earned the five black men disorderly conduct charges.

“Tucker wanted to make a gesture,” said S. J. Ackerman, who delved into the civil rights lawyer’s life story in a riveting and deeply researched article for The Washington Post in 2000. “Old Virginia was really squeamish. They had all these pretentions about how civilized everyone was. Tucker wanted to embarrass them.”

Tucker got the men off and successfully argued in court that blacks had a right to use the Alexandria public library. There was no alternative for blacks at the time.
It was a bittersweet victory. The ruling prompted city officials to build a black library, with fewer resources than its whites-only counterpart. Tucker refused to accept a library card for the new black facility.

“Tucker failed to get what he wanted,” Ackerman said. “He wanted real integration.”

He would spend much of the rest of his adult life fighting for it.

Still, the sit-in, inspired by nonviolent civil disobedience in India and a similar tactic adopted by automotive unions, foreshadowed the activism to come.

“If you go through his whole career, he’s consistently thinking ahead of the curve,” said Ackerman.

But Tucker, who died in 1990, remains largely unknown outside of Virginia, where he spent much of his career aiding the civil rights movement and waging a bitter battle for racial equality in the courts. The theories for this oversight are two-fold in Alexandria, where his legacy lives on in a West End schoolhouse named in Tucker’s honor and today’s celebration of the historic sit-in he orchestrated.

Though the black press picked up on the peaceful demonstration, the mainstream media of the time largely ignored it, said Audrey Davis of the Alexandria Black History Museum, which is housed in the former segregated library on Wythe Street. This is despite Tucker’s efforts to publicize the demonstration.

With a runner keeping him informed of the five protestors’ circumstances, Tucker got the word out before the arrests.

“They say there were 300 people at the library by the time the young men were led out. Tucker had time to alert the media,” said Davis, who credits the lawyer with informing the community. “He had everything planned out … He knew they would be charged with disorderly conduct, which is not what they were doing. They were quietly reading, which is everybody’s right to do.”

Later in life, though, Tucker shunned the limelight, preferring to focus on his work. On this point, Davis and Ackerman agree.

“One reason he is not very well known: He didn’t care who got the credit as long as he got the results,” Ackerman said.

“I think that he was an unassuming man,” Davis added. “He was a very quiet man, but very firm and very firm in his convictions.”

Tucker may not have wanted accolades, but by all accounts he deserves them. Ackerman’s narrative of Tucker’s life paints a picture of a deeply committed and passionate lawyer.

After serving as an officer in World War II, Tucker moved to rural Virginia where he took on cases from black clients in return for little payment. Among his many famous cases was his work on the appeal of the Martinsville Seven — a group of black men convicted of gang raping a white woman — which he joined as a lawyer for the NAACP.

As Ackerman recounts in his 2000 article for The Washington Post:

“The executions were scheduled to begin February 2 [1951]. As crowds of protesters gathered at the governor’s mansion and the penitentiary in Richmond, Tucker and a colleague began a frantic round of last-minute appeals, seeking a sympathetic judge. Denied their petition in Richmond, they sought out one U.S. 4th Circuit judge in Charlottesville. Denied again, they drove to Charlotte, N.C., to visit another 4th Circuit judge. And then they drove to Washington, where they wound up a little after midnight on February 2 in the living room of Chief Justice Fred M. Vinson’s apartment at the Wardman Park. Vinson was unpersuaded. At 8 a.m. the executions began.”

From there, Tucker took on desegregation, filing suits in cities and counties across Virginia and fending off attempts to see him disbarred. Later, frustrated with state and local officials’ attempts to flout desegregation — even well after Brown v. Board of Education — he led the way for forced busing.

Ackerman and Davis trace the start of Tucker’s legal career to a childhood incident. In 1927, while riding a trolley from Washington to Virginia, Tucker’s younger brother flipped around a couple of chairs so that the two boys could face their older brother and another friend.

Once the car crossed into the commonwealth, a white woman complained that the seats extended into the whites-only section. When they got off, the woman had the boys arrested. According to Ackerman’s research, Tucker was fined $5.03.

“He was ahead of his time in every way,” Ackerman said. “You have to consider: People say the civil rights movement started with the Montgomery bus boycott in 1955 … and, of course, Tucker got arrested for doing the same thing in 1927.

Thomas Watson, a lawyer who shared an office with Tucker’s father, appealed the case. The all-white jury found Tucker innocent.

“He realized that the law was very powerful, it could be used to change things that were not fair,” Davis said. “I think that is how he really perceived and … loved the law.”

Davis, Ackerman and others in the community are dead-set on making sure Tucker gains newfound recognition for his work.

Organizations throughout the city are collaborating to mark today’s 75th anniversary of the sit-in, which will be held at the Barrett branch library at 717 Queen St. Mayor Bill Euille, state Delegate Rob Krupicka and newly appointed member of the U.S. Commission on Civil Rights Patricia Timmons-Goodson are all expected to deliver remarks.

“Seventy-five years ago, [Tucker] and five young associates reminded our country that all people deserve equal access to public facilities,” Euille said earlier this week. “Their courageous but peaceful act led to real change, and their legacy lives on in today’s modern and accessible [library system]. Still, we know the fight for equality continues in many areas of our society.”

Tucker and his early protest may not come to mind as quickly as the Montgomery bus boycott, the Greensboro sit-ins or the “Letter from Birmingham Jail,” but his name is gaining prominence, said Ackerman and Davis.

“They may not have been the flashiest people in the world, but they changed the face of their community,” said Davis of Tucker and his five young men.
Marc Funn, son of Carlton Funn, who spent his life teaching and preserving black history before dying in 2012, said the celebration marking the anniversary of the sit-in will help raise awareness.

“There’s a feeling that people don’t talk about him enough, that more of Alexandria needs to know about Samuel Tucker. There are probably a lot of folks that know that there’s a school named after him, but don’t really know the man and what he meant to the City of Alexandria,” Funn said. “Time moves on and we forget things that happened in the past, those that blazed trails for us so we can enjoy the benefit of living … like we do.”

Funn describes the sit-in as courageous and brave, quick to note that the men were taking a serious risk.

“It was not very popular to buck the status quo, a lot of people paid with their lives,” he said. “I’m sure it was something that went through their minds, the fact that things could have turned out terribly just for an act of defiance.

“That did not deter them.”