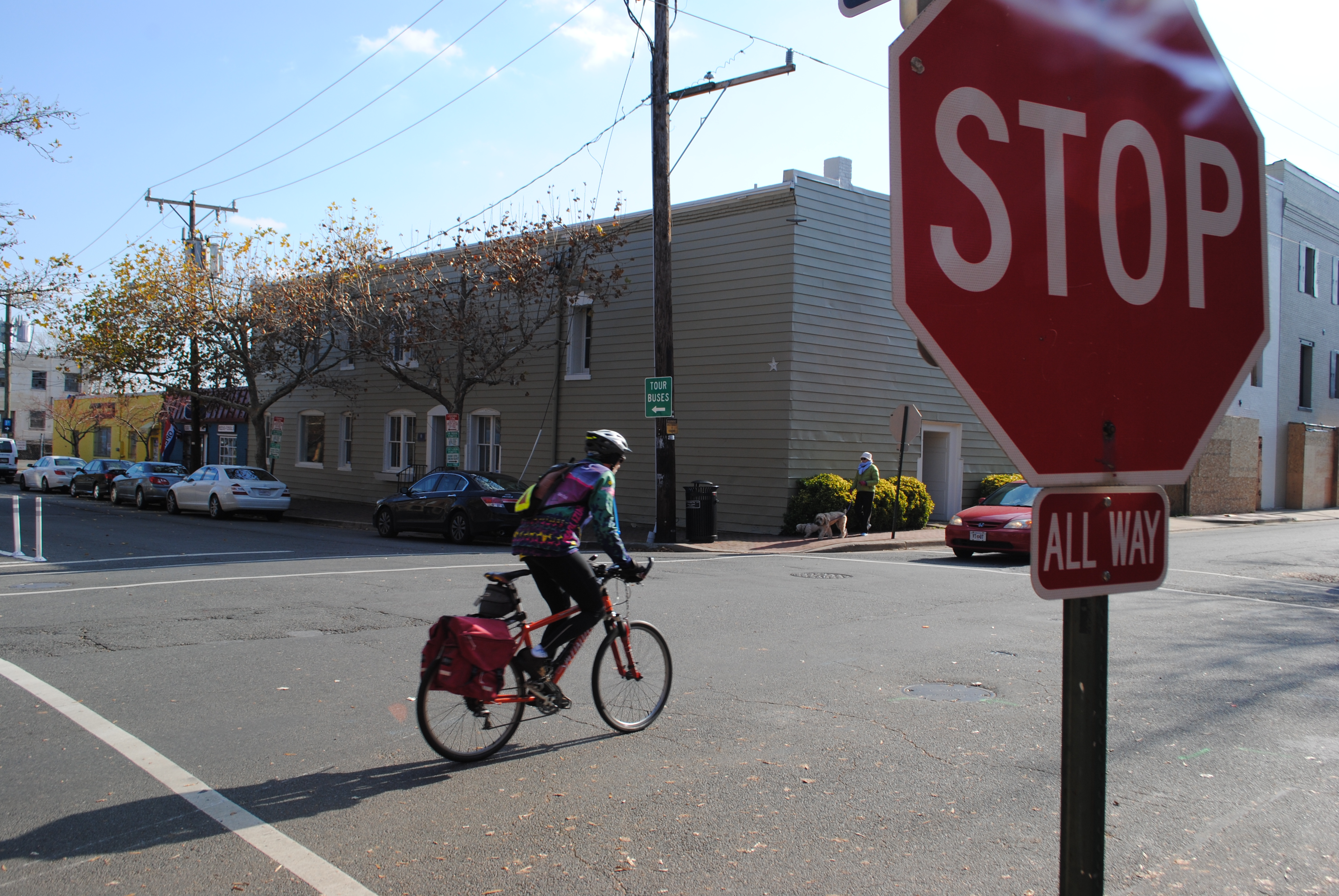 But pedestrians and motorists aren’t alone in clamoring for action against the scofflaws. Cyclists want their peers to obey the rules of the road as well.

“We all have a responsibility to be responsible road users,” said Greg Billing, advocacy coordinator with the Washington Area Bicyclist Association.

The group tackled the issue headlong in Alexandria on October 2. The association’s bike ambassadors set up camp along Union Street during the evening commute, encouraging cyclists to obey stop signs along the heavily trafficked stretch of road in Old Town.

“The reason we were there … was to get out there and encourage cyclists and drivers alike to work on better behavior,” Billing said. “We’re not enforcement — we can’t write tickets — but we can encourage responsible behavior. That was a commitment we made to the community.”

The commitment Billing referenced was forged in the controversial, months-long debate over adding bike lanes to a portion of King Street not far from the Metro station. Waged between transit officials, nearby homeowners and advocates and critics of cycling alike, the bitter battle eventually required the intervention of city council.

For months, local opinion pages were filled with letters to the editor decrying the behavior of motorists or the actions of cyclists — and the attitudes of both camps. More than a few noted a perceived penchant of cyclists to recklessly run red lights and ignore stop signs.

“We’re a bicycle organization, we talk to bicyclists. Those are the people we can encourage to be more responsible road users,” he said. “There are plenty of people who don’t listen to us — everybody is an individual making their own individual decisions — but what complements this [is] everybody else encouraging the people they talk [with] to be more responsible and courteous.”

“Part of the genesis was [when] one of the vice chairs and I stood on Union Street one night,” Durham said. “When you observe [these] things first hand, you say, ‘This just isn’t right.’ That was our motivation and remains our motivation. We’ve been down there with our volunteers and we’re not happy with the behavior that we see.”

Union Street, home to a portion of the popular Mount Vernon Trail, often comes up in discussions about the place of cyclists on local roads. Citing residents’ complaints, city police cracked down on scofflaws there earlier this year.

But when it comes to outreach, both the regional bicycle association and the local advisory committee target the most egregious offenders for education and encouragement.

“We’re a fairly walkable city today, but one of the things that will discourage that is if people fear for their safety,” Durham said. “I just know that I want Alexandria to be more walkable; I want more people to be comfortable walking. … I’m trying to remove what I see as an impediment, this feeling of discomfort.”

Local advocates are studying whether the grassroots intervention is making a difference among the cycling community. In the meantime, Billing said members of his association plan to promote better behavior in Alexandria throughout October.