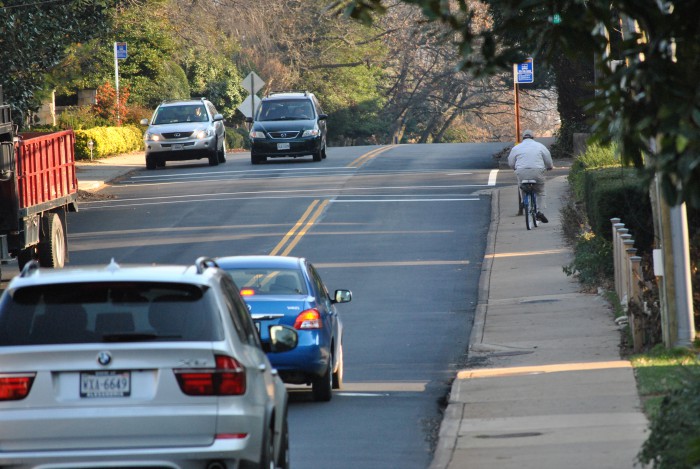 At a recent city council public hearing the topic of bike lanes was discussed. Bicycle opponents called for stepping up punishment of cyclists who ignore traffic laws.

As both a cyclist and a motor vehicle driver, applying laws enacted to regulate motorized vehicles to bicyclists is like trying to fit the proverbial square peg into a round hole — both the motorist and the cyclist will be disadvantaged.

As a motorist, nothing irks me more than being behind a cyclist who is turning left.  Not only does the cyclist disrupt the general flow of traffic, but the cyclist is in the perilous and nerve-racking position of facing approaching traffic as well as drivers passing on their right.  As a cyclist, I find it better to ride through an intersection and cross the street when traffic either abates or when I “have” the traffic light. This is safer for me and means that faster moving automobile traffic is not impeded.

At other times, cyclists may be safer and pose less of a hindrance to motor vehicles by hopping a curb or engaging in acts that are contrary to the rules of the road.

While bicycling in traffic I am most concerned with lazy and inattentive drivers. I understand that the act of using one’s turn signal may be felt to constitute a form of aerobic exercise by some, but for the cyclist, the lack of a signal can be a matter of life or death.  I make every effort to ride defensively and feel safest riding as near to the curb as possible — remaining on the lookout for car doors opening suddenly and evading roadside debris.

If a car behind me has its right turn signal on, I will either speed up to get out of the turning car’s path, or will slow down to avoid being in the turning car’s blind-spot.  Within the past year, I’ve seen two cyclists wind up on the pavement because of negligent right-turning cars.

Biking should be encouraged in the city for a multitude of reasons. Yet rigidly applying traffic rules on cyclists does not serve the best or safest interests of either the driving or cycling public. I would suggest that cyclists have more of an incentive to avoid accidents with cars than cars have with cyclists, and that cyclists are necessarily the more vigilant of the two.