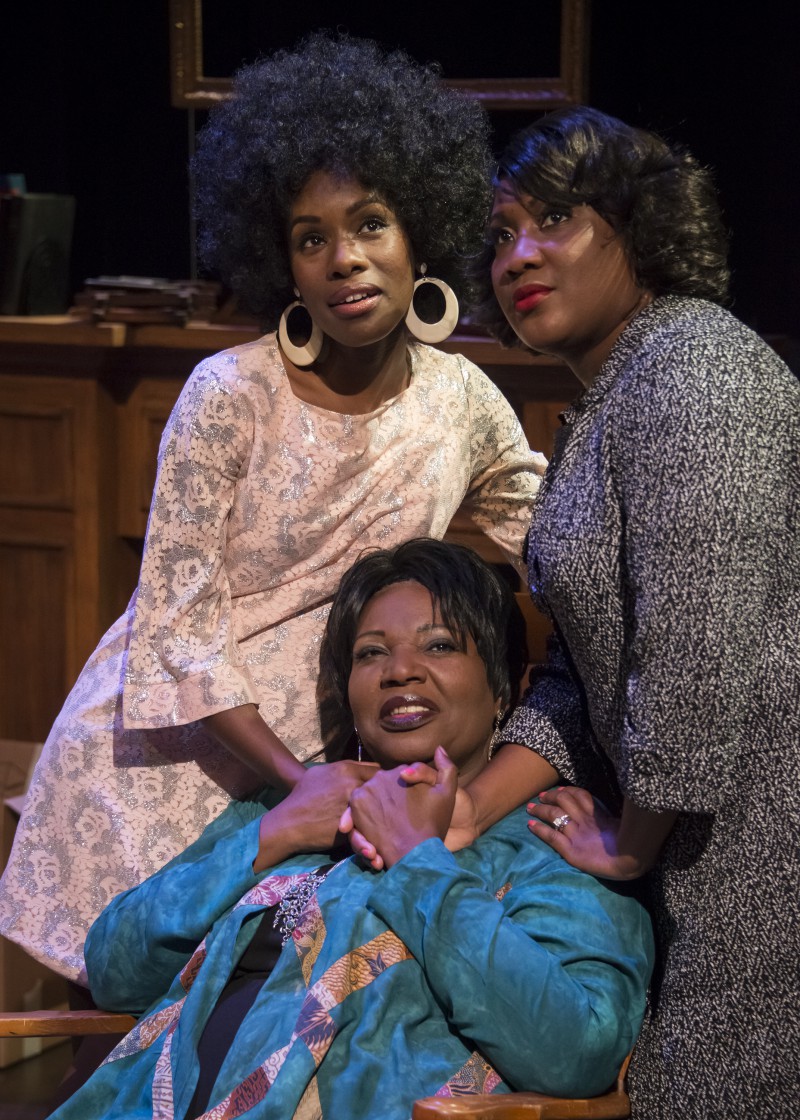 Rarely do we see so magical a collaboration as this one between writer/director Jones, composer William Hubbard and director of music William Knowles, with the original story having been concocted by Janet Pryce. Based on 19th century Russian playwright Anton Chekhov’s “Three Sisters,” it tells a tale of the Bradshaws. Olive, Marsha and Irene are three sisters in the District’s post-Vietnam War era, who come together in the family’s home for the burial of their soldier brother, Anton.

Twenty-one musical numbers form a hypnotic web of stories as the women describe their childhoods, maturation and dreams for the future. The dialogue and music are so closely woven together that the transitions between the two are nearly imperceptible.

The incomparable actresses Bernadine Mitchell (Olive) and Roz White (Marsha) reprise their roles from the original production, while Ashley Ware Jenkins is new to MetroStage in the role of Irene, the feisty black power radical.

Set to a score of R&B and gospel — with some Motown thrown in too — the trio describe their alternate perceptions of life with their autocratic West Pointer father whose dream it was to see his only son follow in his military footsteps. The plot is simple but the emotions are not. Each woman brings a different view of the man they feared and loved to the table. We begin to see how they came to be as they are.

“Daddy believed in that uniform. [He was] a hard man born in a hard time,” Olive explains to Irene, who is anti-war.

Marsha calls herself “the middle underprivileged.” Married early, she wonders if there is more to life than a husband and six children. Olive, who stayed behind to care for their ailing father and become a university professor, longs for a husband. Irene dropped out of college to pursue her political leanings — “Our anger is righteous!” she insists — and is finding her footing in a city torn apart by riots and looting. To quash her sisters’ protests, she references Martin Luther King, Medgar Evers and Malcolm X to make her points.

The show evokes laughter and tears. One audience member sobbed uncontrollably listening to “Hold Me,” a heart-wrenching song in which Olive and Marsha comfort Irene, and there are many other moments that are powerfully evocative as they examine the emotions of the performers and the memories of the civil rights movement.

But the laughter flows just as easily as the tears. In “Basement Kind of Love,” Olive reminisces about her first boyfriend, Cadillac Johnson. After much simulated bumping and grinding, she admits to losing her virginity many times and still looking for it.

Mitchell closes the first act with the old gospel tune, “There’s A Leak in This Old Building,” which shows off her gorgeously smooth voice and pairs it to the electrifyingly precise harmonies of White and Jenkins.

Be prepared for a whopper of a show filled with heart and soul and a few of the most intoxicatingly glorious voices you have ever heard.