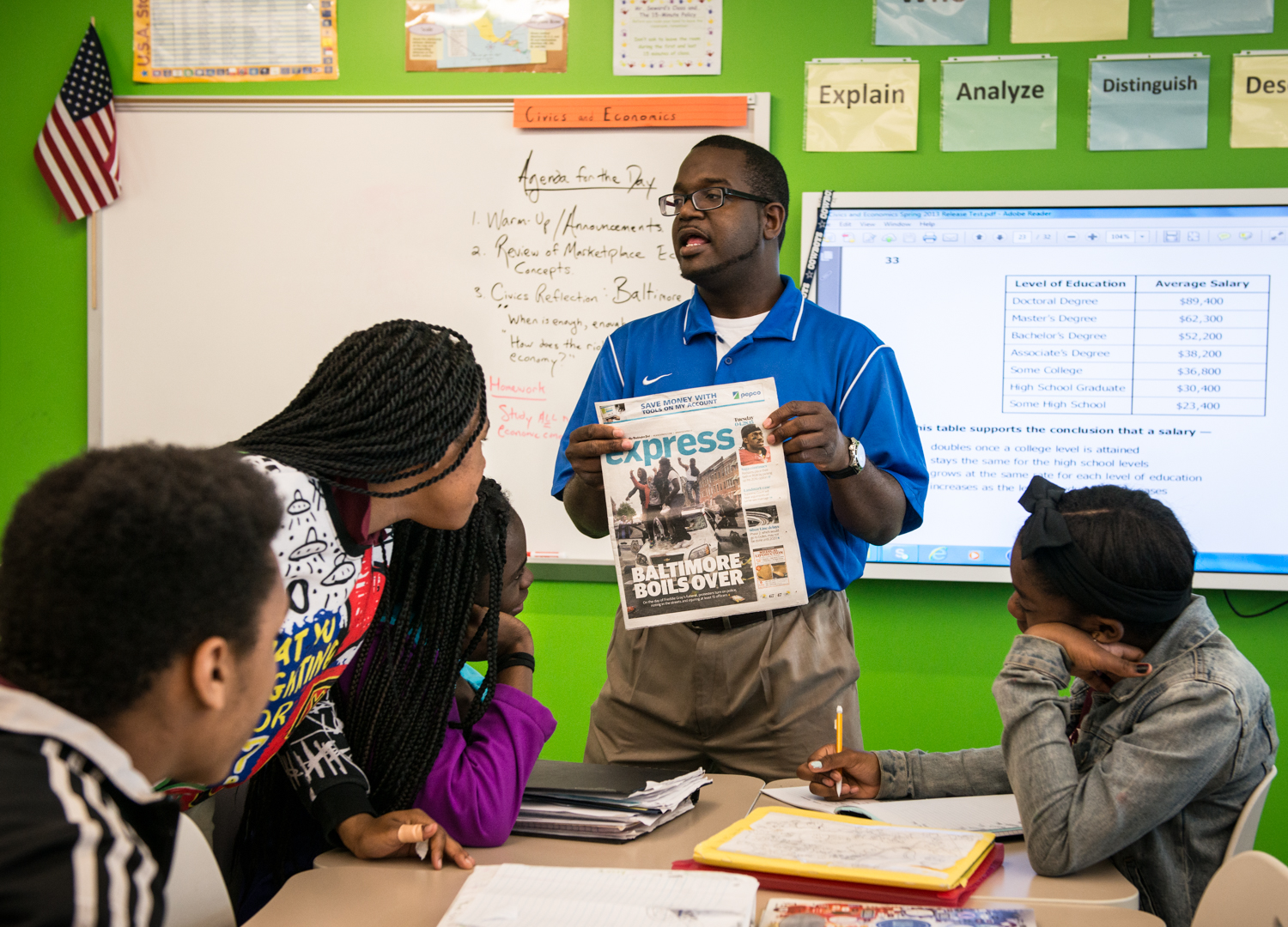 Jefferson-Houston School teacher Carlos Seward stood before his eighth grade Civics and Economics class Tuesday holding that day’s newspaper. On the front page is an image of the unrest in Baltimore that occurred just after the burial of Freddie Gray, a 25-year-old black man whose spine was severed while in police custody earlier this month. In the photo, black teens defiantly stand on top of a police car making obscene gestures.

“Look at this picture closely,” Seward asks his class. “What does this picture have to do with the death of a young man?”

A young black female student answers, “Nothing,” she said. “They’re making all of us look bad.”

Then the conversation blossoms through the classroom. With Seward’s guidance, students discuss the repercussions of the riots: businesses being destroyed, insurance premiums increasing for property owners, families affected, transportation disrupted and the like. The class determines through their conversation that the riots not only have a direct impact on them, but also have global consequences.

Seward’s class is an example of the International Baccalaureate program currently being implemented within Jefferson-Houston at the middle school level, making the school one of just two IB schools in the D.C. metropolitan area.

“The students learn a subject from all angles,” Phillips said. “In IB, the student is the center of learning.”

Jefferson-Houston received full IB authorization for its primary grades in April 2014. The middle school program is currently in the application process with IB representatives and is scheduled to receive full accreditation in October 2015.

IB and the standard curriculum differ in perspective and approach. IB stresses interdisciplinary learning, where students not only learn to succeed taking a test but learn to analyze a subject from different angles and contexts. As part of International Baccalaureate requirements, students also study a world language. Jefferson-Houston students take Spanish.

The walls of Phillips’ office are plastered with the school’s education plans. As the next school year approaches, he is busily anticipating what students and staff will need for support. His hope is that all of his students eventually will participate in the program.

“The IB program is more stringent than the standard curriculum, but everyone is authorized to be an IB student.” Phillips said.

Phillips and the city’s Schools Superintendent Alvin Crawley presented the school’s work to the Virginia Board of Education in Richmond in January, and received their support in helping the school reach its goal of accreditation.

“This year we have done some restructuring at the school and have taken an in-depth look at instructional programs, teachers and staff in the building to make sure what we are doing results in student success and helps the school meet accreditation standards,” Crawley said. “IB is a big part of this and we are confident it will make a difference.”

Back in Seward’s class, Seward holds up a portrait of Charles Hamilton Houston, a black lawyer who mentored the first black Supreme Court justice, Thurgood Marshall. Many of the students recognize his name from the Charles Houston Recreation Center in Old Town, but don’t know his relevance in history.

Seward told the students of Houston’s past growing up in segregated South Carolina and witnessing the lynching of his father.

“If anyone had a reason to light up South Carolina, Charles Hamilton Houston did,” Seward said. “But he didn’t.”

Tying the lawyer to Baltimore has the students completely engaged, with hands raised and the conversation at full pace. Seward says Houston took the high road and fought injustice with his intelligence and skill as a litigator.

Seward says Houston’s motto was: “The way to beat the system is to know it backwards and forwards.”

Seward looks to the classroom clock and winds up the discussion for the day by posing a question.

“Is robbing a liquor store going to help convict the perpetrators of this crime?” he asked. “No, it’s not. What would you have done? Why?”

Seward excused the class and seemed pleased as his students packed up their bags, still engaged in conversation with each other about the day’s subject.