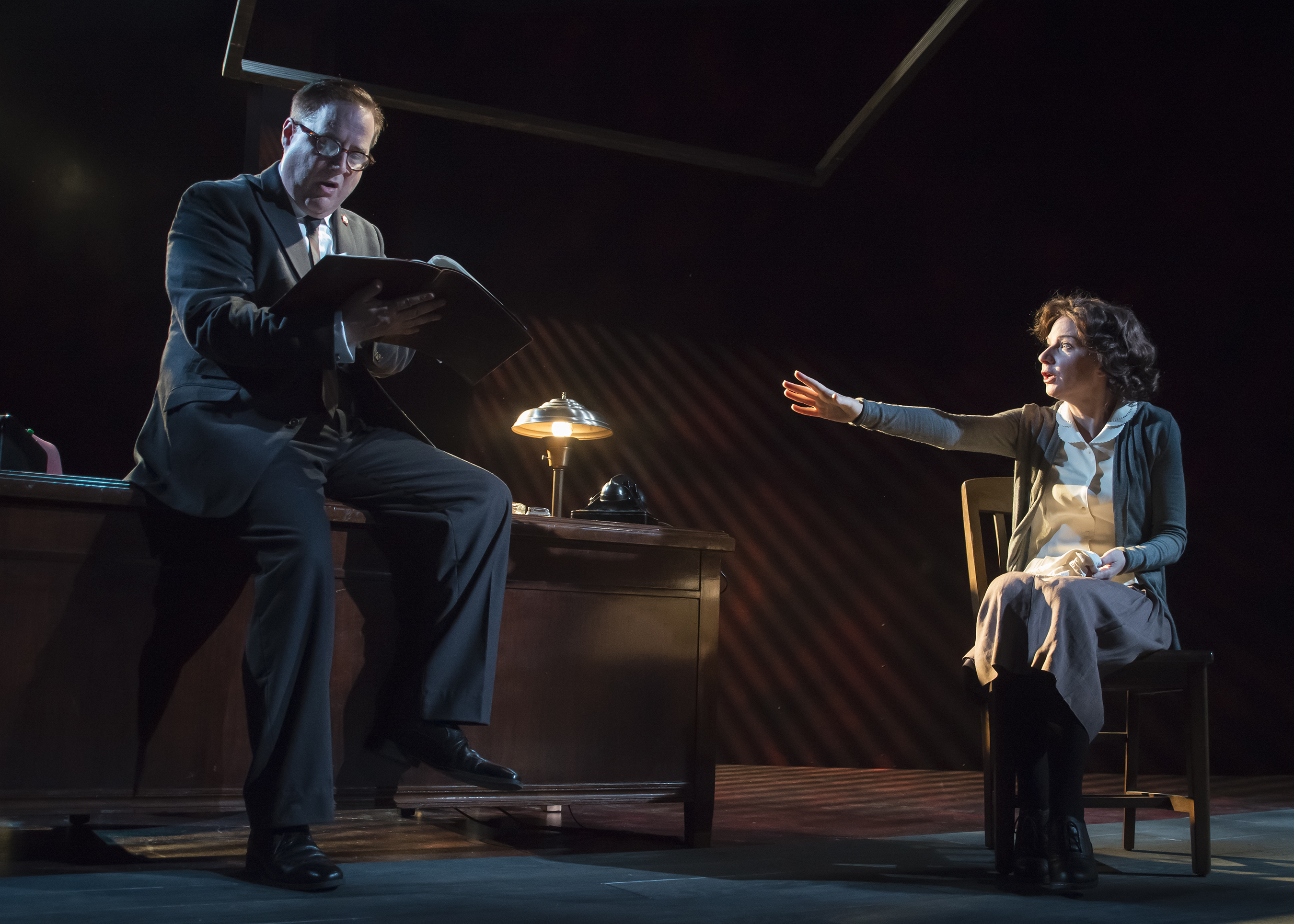 In 1930s Russia, privacy was a luxury afforded to no one. Suspicion and accusation were the business of the state and its bureaucracy was vast and unyielding. In “The Letters,” playwright John M. Lowell thrusts us headlong into the underbelly of the Soviet political machine in a two-person drama that focuses on the machinations of that pursuit.

Anna is an editor at an agency investigating famed composer Pyotr Tchaikovsky for being gay, a crime in the Soviet Union. His personal cache of letters to an unnamed man has been confiscated and her department has been tasked with investigating and censoring them for references to homosexuality. In this Orwellian world of interrogator-and-accused, all perceived illicit activities threaten the business of the state and those who breached these anti-intellectual statutes were tortured into confession or sentenced to either life in a remote gulag or death. It is a cautionary tale, one that calls to mind the Spanish Inquisition and the Third Reich.

The character known only as the Director is the apparatchik, on whose stringent edicts all investigations turn. When Anna is summoned into his office, the single room in which the play is set, it is to frighten her into implicating her fellow editors by accusing them of concealing copies of the letters. The explanation as to why she would defend their honor is left to the audience’s imagination.

Anna Borisovna is a widow whose late husband, a cellist, was also involved in the arts. Because of that she is seen to be sympathetic to Tchaikovsky’s fate, and in turn the fate of her two colleagues, the young Josef and the elder Pavel. Offering her a promotion, the Director alternately flatters: “No person likes their efforts to be ignored,” and threatens, “You are already a dupe,” suggesting she is covering for her fellow editors. “Are you also a traitor?” he asks.

As his seemingly innocent conversation of feigned familiarity unfolds, we soon realize he is bent on entrapping her into revealing the location of the letters and admitting a conspiracy among her associates. But Anna catches on to the cat-and-mouse game and turns the tables on the Director. “In this office, truth is an annoyance, an embarrassment,” she asserts, hoping to dissuade his diabolical methods.

Susan Lynskey, whom we adored most recently in MetroStage’s production of “Ghost-Writer” in a role that earned her a Helen Hayes Award nomination, is the consummate actor. Her ability to inhabit the spirit and gravitas of Anna is a master class in character divination and shows why she is so highly regarded in her craft. To watch her is to appreciate her finely tuned technique of actualizing her character through slow turns. Here we see her ability to turn on a dime from shrinking violet to pouncing cat, and make it believable.

Michael Russotto plays the pugnacious and arrogant Ministry Director. He is the perfect counterpoint to Lynskey’s controlled unfolding of Anna. He struts and poses, gesticulates wildly and terrifies convincingly, making use of the whole stage to inform and establish his character, a skill few actors ever master.

Giorgos Tsappas presents us with a spare set — a desk and a smattering of chairs — which is all the better to focus on the performers. Stage lighting, reminiscent of a 1930s film, is masterfully designed by Alexander Keen.

“The Letters” is a thrilling drama that is taut, crisp and politically charged.