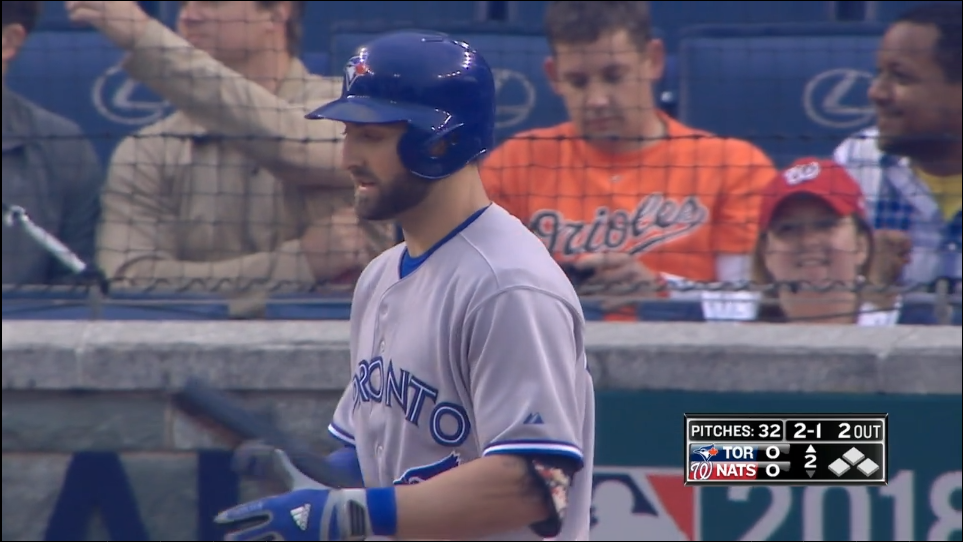 It could have be seen as the ultimate act of bravery and defiance: wearing the shirt of a rival at an opponent’s ballpark and sitting right in front of home plate in full view of everyone watching the game on television.

But Alexandria native Adam Smith does not quite see it that way after he gained fame last Tuesday for wearing a Baltimore Orioles T-shirt at Nationals Park as he watched the Washington Nationals take on the Toronto Blue Jays from the Presidents Club seats just feet from the batter’s box.

Instead, it is something the diehard Orioles fan says he always does, given the strong baseball connection between D.C. and Baltimore, which for years was the only feasible option for fans of the national pastime in the nation’s capital to catch a game in person.

“Whenever I go to a Nats game, I pretty much wear Orioles gear because I support the Orioles through and through,” Smith said. “That was D.C.’s team when I was growing up, at least because I’m in my early 30s so that’s the generation coming up from D.C. [where] if you liked baseball, you pretty much were an Orioles fan because it was only a 45-minute to an hour drive to get up there to watch a game.

“For me, I always personally consider D.C. to be an Orioles town. That’s very short sighted, I know, because we’ve got such a great team in the Nationals here that are representing the city so well these last few years. For me, D.C. is an Orioles town and it always will be, and that’s
what possesses me to wear an Orioles shirt.”

The 32-year-old works as an independent insurance broker for Old Town insurance company Clarke and Sampson, and also has a side business as a DJ known as Smitty Gritty. He was born and raised in the Port City and attended Bishop Ireton High School before studying at Virginia Tech. His connection to the Orioles goes back a long way, especially as D.C. was without a team during his childhood.

“That’s the first team I’ve ever had any allegiance to,” Smith said. “My mom grew up in Baltimore and we would go up there on the weekends to visit my grandparents. They were all Orioles fans, and we used to go up to Memorial Stadium and watch Cal Ripken Jr. and Eddie Murray back in the 1980s. Then they built Camden Yards and that quickly turned into my favorite sports venue in the entire country that I’ve been to.

Smith acquired tickets to the game through a friend, who offered him one of four corporate seats in the Presidents Club through his father. Despite some initial concerns, Smith agreed to go and take in a game in some of the best seats in Nationals Park.

“One of my friends, it was his dad’s corporate seats,” he said. “He’s sat in those seats a dozen times in the past and I’ve always seen him on TV and we always text each other back and forth when I’m kind of just making fun of him and having a little bit of banter back and forth when he’s on television.

“He offered the other day; he asked if a few of us wanted to go to the game with him. I’m actually trying to save up for a house and trying to stick to the budget, so I told him I probably would pass on the game, but he quickly came back and said these were club seats, everything is free, ‘You might want to reconsider as you might find yourself on TV.’ I was like, ‘Alright, well, I guess if that’s the case let’s go ahead and do it.’”

Almost as soon as he took his seat and the live broadcast on the Mid-Atlantic Sports Network began, Smith says he got a great deal of feedback from friends, and that it continued almost unabated throughout.

“I was getting texts left and right, people were telling me to put my phone down, don’t be that guy who’s on his phone the entire broadcast,” Smith said. “A lot of other people were telling me they were jealous of how I got to sit in those seats and so on. Just a lot of ‘Put your phone
down,’ and ‘You had to go and wear an Orioles shirt, didn’t you?’ Stuff like that.”

He also met two members of the Washington Capitals, who were both taking in the game after a long season in the NHL. Smith managed to take selfies with center Nicklas Backstrom and defenseman Mike Green to complete what was a memorable outing.

As for future games, Smith is adamant that he will continue to wear apparel of his favored Orioles if he returns to Nationals Park.