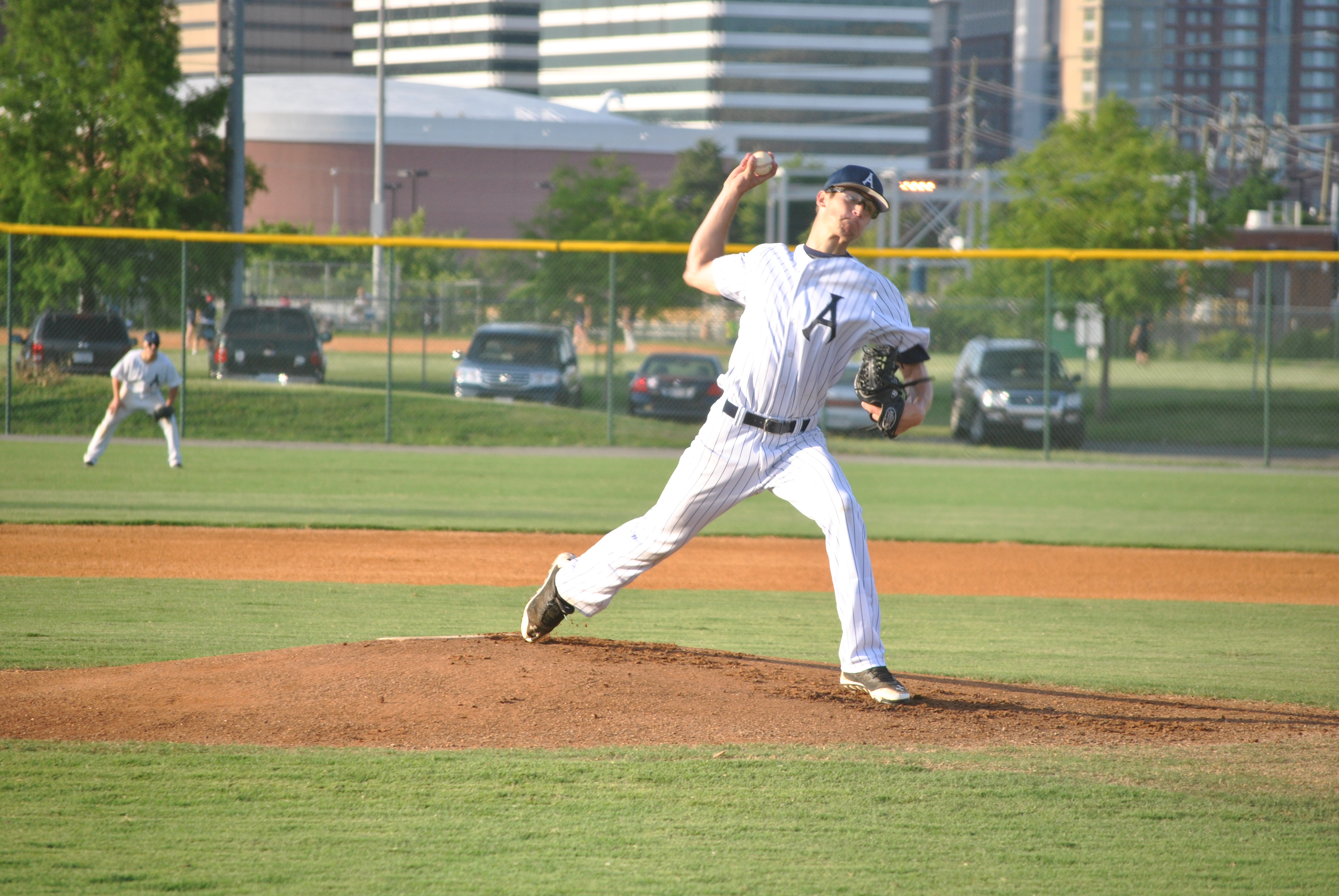 In the top of the fourth inning against the Herndon Braves at Frank Mann Field Monday evening, pitcher Gabe Mosser found himself in a bit of trouble on the hill, even with his Alexandria Aces side up 5-0 over the visitors in the Cal Ripken Collegiate Baseball League.

The rising sophomore from Shippensburg University allowed two hits and a walk to load the bases, with a strikeout sandwiched in to provide the inning’s first out. After a mound visit by Aces pitching coach Anthony Naso, Mosser found himself in even deeper trouble against the next batter, Braves infielder Jacob Weston, who worked a 3-1 count.

But Mosser battled back to strike out Weston and then induce a fly ball from the next batter, Logan Augustine, coming away from the inning unscathed and with the Aces’ advantage still intact.

It was perhaps the most difficult moment for the right-hander, who secured the win in the Aces’ 7-2 triumph over Herndon after throwing six innings of one-run ball while earning six strikeouts. It also cemented Mosser’s status as Alexandria’s ace pitcher as he moved to a 3-0 record.

Mosser’s performance came with a number of Shippensburg Raiders alongside him, as catcher Jake Kennedy, shortstop Mike Marcinko and third baseman Ryan McMillen all started on the diamond for the Aces. The pitcher cited his familiarity with Kennedy behind the plate, and described a relationship that is almost telepathic in nature.

“It all started at [Shippensburg],” Mosser said after the game. “[Kennedy] knows what I want to throw, I know what he’s thinking. It just works out like that. He’s a calming influence. I could throw a ball in the dirt, and I know he’ll keep it in front.”

Kennedy agreed and spoke of an understanding in which few words or signals are needed to determine what the next pitch will be.

“When [Mosser] wants to throw a certain pitch, he just looks at me and I know what pitch he wants to throw,” Kennedy said after the game. “He likes to go to his knuckleball a lot, and that’s what he usually throws. It’s a nice relationship.”

After a straightforward first three innings, Mosser ran into trouble in the fourth and then again in the fifth, when he allowed two baserunners and conceded his only run thanks to a Braves runner scoring on a fielder’s choice. But he recovered in the sixth to record two strikeouts and give up just one hit, a triple to center field that was nearly caught.

The ability to work his way out of jams is one that defined Mosser’s game against Herndon, and was indicative of his calmness in spite of having opponents on base.

“He keeps his composure on the mound pretty much,” Kennedy said. “He doesn’t let anything bother him, he doesn’t pout or anything when he gives up base hits. Whenever he gets wild, I tell him to calm down, and that if I’ve got runners on the bases I’ll throw them out. Other than that, he’s calm, cool and collected, and doesn’t really worry about anything.”

“Early, Gabe goes deep into counts,” said Aces head coach David DeSilva after the game. “Occasionally he works into jams and puts a guy or two on base, and we had a couple of errors tonight. But he always finds a way to work out of it. He limits himself; he doesn’t give up the big inning. If he does end up giving up a run, it’s usually just one or two and it’s damage-control.”

He also received strong run support from his Aces teammates, especially in the bottom of the third inning as they put five runs on the board in a two-out rally. Malcolm Nachmanoff got things rolling with a two-run home run, and then Griffin Harms and Beau Hall tacked on additional runs with an RBI single and a 2 RBI double, respectively.

In the fourth, Kennedy hit an RBI double to stretch the hosts’ lead to 6-0, then scored himself on a wild pitch to make it 7-0. Kennedy’s double scored another Shippensburg teammate, Marcinko, who was making his Aces debut. He said that those relationships the players have formed with the Raiders in their campaign in NCAA Division II’s Pennsylvania State Athletic Conference has been a big help, and was a key reason in him joining up with Alexandria.

“I came here from the Cape Cod League, and I have three teammates here and they said they loved it,” Marcinko said after the game. “I said, ‘Why not try to make a name for myself down here?’ I know the coaching staff is great and they give you the opportunity to seize it.

“Everyone knows how you play, how you react to stuff. [Mosser] has trust with Jake back behind [home plate], Jake knows what Gabe can do in certain counts and stuff. I feel Gabe has the trust in me at shortstop, and Ryan [McMillen] at third. It’s great playing with each other.”

With such deep personal relationships spread throughout the roster, the Aces are hopeful of shaking off a difficult start to the season dominated by rainouts and moving closer to a playoff berth.

Olivia Anderson - August 4, 2022
Olivia Anderson | [email protected] This past weekend was a momentous one for the Alexandria Aces, who won the Cal Ripken Collegiate Baseball League title for...