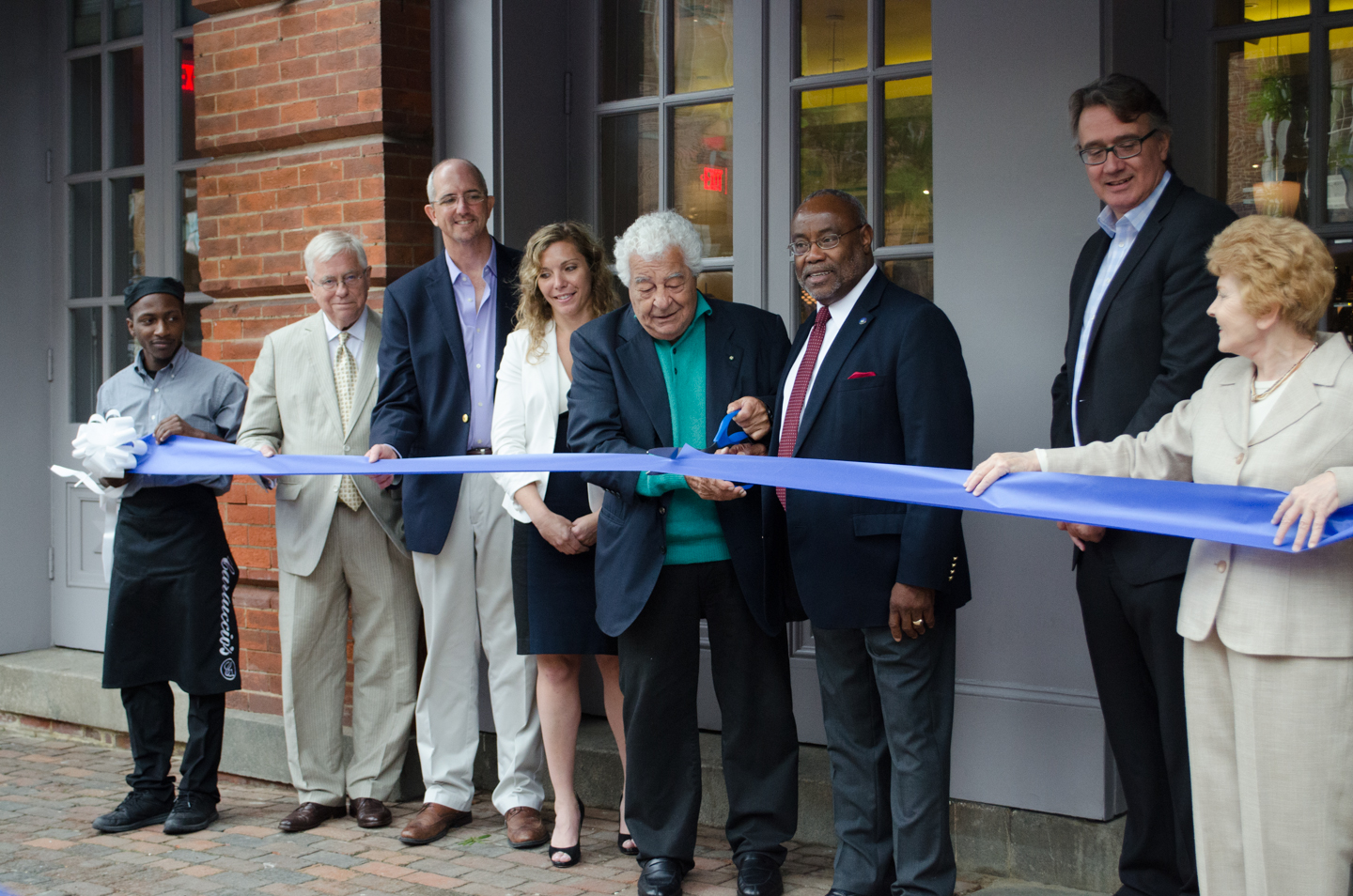 As a young child growing up in Italy, Antonio Carluccio learned to cook by watching his mother, and added to his love of food through picking wild mushrooms that grew near their home.

Now, the 78-year-old retains that same passion, and is bringing it to the United States for the first time with the opening of the country’s first Carluccio’s restaurant at 100 King St. They already have more than 100 locations in the United Kingdom as well as others in Ireland and
the Middle East.

The philosophy of the restaurant’s food is, as Carluccio describes it, is “Mof, mof,” maximum of flavor, minimum of fuss. The emphasis on simple, well-cooked Italian dishes is something that dates back to his childhood.

“I came out of a large family, my mother taught us how to cook, but you also observe and you enjoy the food,” he said in an interview before the official opening. “I am a cook and not a chef because I do everything by myself, slowly, making mistakes, making a big mess.

“You spend your life in the kitchen, the kitchen is the point of union because everything is there and you observe and have tasks in a family with six children. I was in charge of going to pick up groceries and because we lived above a station, I was in charge of going down to the office to see if the train would depart on time so I could tell Mama, ‘Yes,’ so she could put the pasta into the water so the pasta would be perfect. When you grow up like this you learn the very important items to be able to cook.”

Looking through the menu, there are a number of Italian staple dishes, along with several other special items. One is the penne giardiniera, which is penne pasta with zucchini, chilli and fried spinach balls with Parmesan cheese and garlic. For every order of this dish, Carluccio’s makes a discretionary donation of 50 cents to the charity Action Against Hunger, and has so far raised over $1.8 million worldwide for their projects.

Everything is designed to be simple, using as few ingredients as possible, and to use genuine ingredients from the different regions of Italy, something Carluccio says is a key principle of his restaurant’s cooking.

“Italian food is so good because it’s simple and pleasing,” he said. “I don’t know anyone who is not pleased with Italian food. Starting from children with simple noodles but everywhere the food is cooked well and the simplest.

“Now you come to the crunch of transforming home food to the restaurant because it’s a little bit different, [but] the brilliant thing about Italian food is you can adapt it to the public. Now in Italy there are people that are ashamed to produce the very simple and good food; the real good food is the one that has been taught to us for years. My surrounding, not over the top, is nice and pleasant with very good food, simple and well cooked at an affordable price. When you have those four variables, you have success, no doubt.”

In addition to the food, the restaurant is designed to be welcoming to guests, again reflective of the family atmosphere that Carluccio wishes to purvey.

“The ambiance is to be pleasant and the reception is to be immaculate by people who know what they are doing,” he said. “The waiter is one of the most important items of the restaurant for its success, because it is dependent on them from the beginning to the exit for the customer to feel well.

“Most places usually get the money and go, I’m afraid, without attending to all of this. Waiters have become a profession and I remove my chapeau [hat] when I see someone who is very good. As long as you do what you like and do it well, that’s why any Italian restaurant is a good Italian restaurant if it has these aspects.”

The newest Carluccio’s joins a crowded restaurant scene in Old Town, which already contains a number of thriving establishments in the blocks surrounding its latest arrival. But with an authentic Italian market that sells all manner of produce in addition to a welcoming atmosphere and competitive prices, those involved are confident it can stand out.

“None of [our competitors] have got a market, an Italian market like we have,” said Carluccio’s Chairman Simon Kossoff at the press launch on June 2. “It gives us an extra angle to the business. More importantly, it says, ‘Hello, we’re experts on Italian produce,’ and I think that’s important.

“We’ve aimed for a pricing range that is just not expensive. We go for what we call ‘Wow’ pricing, and we’ve tried to do that here. I think the other thing is that we’re open longer hours than everybody else. We have this thing where we say there are no rules for customers in Carluccio’s. But what it means is you can come here in the morning and have pasta, or you can come here in the evening and sit at a table for an hour and a half and just have a coffee. It’s a slightly different vibe that a traditional lunch and dinner restaurant.”